Fast day at pool, track on Day 7 of Tokyo Olympics 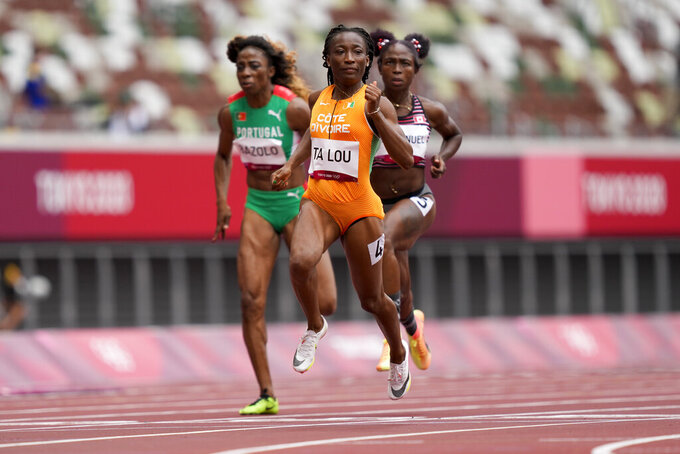 TOKYO (AP) — The Tokyo Games got their first swimming individual world record and a fast start to the track competition on Day 7 of the Olympics.

Tatjana Schoenmaker of South Africa won the women’s 200-meter breaststroke with a time of 2 minutes, 18.95 seconds, breaking the mark of 2:19.11 set by Rikke Moller Pedersen of Denmark at the 2013 world championships in Barcelona.

The United States claimed the other two medals. Lilly King set a blistering pace early in the race and held on for a silver in 2:19.92. Annie Lazor grabbed bronze in 2:20.84.

“I wasn’t expecting that at all,” said Schoenmaker, who added to her silver in the 100 breast. ”It couldn’t have been a better race. It still just doesn’t sink in, maybe one day.”

Track and field is underway at the Olympics, with the women laying down some very fast times in the 100 meters heats.

There were no major surprises in the opening session at the Olympic Stadium, other than those early times in what promises to be a tight women’s 100 battle.

Defending Olympic champion Elaine Thompson-Herah won her heat in 10.82 seconds and fellow Jamaican and favorite Shelly-Ann Fraser-Pryce cruised home in 10.84 to win hers. Marie-Josée Ta Lou of Ivory Coast laid down the fastest time of the heats in a surprising 10.78 seconds.

Six women finished in under 11 seconds. Teahna Daniels of the United States and Dina Asher-Smith of Britain also progressed. The women’s 100 final is Saturday.

There will be no Golden Slam for Novak Djokovic.

The top-ranked Serb lost to Alexander Zverev of Germany 1-6, 3-6, 6-1 in the semifinals of the tennis tournament.

Djokovic was attempting to become the first man to win all four Grand Slam tournaments and Olympic gold in the same year. He won the Australian and French Opens as well as Wimbledon this year and needed the Olympic and U.S. Open titles to complete the collection.

Steffi Graf in 1988 remains the only tennis player to achieve the Golden Slam.

Zverev’s opponent in the gold-medal match will be Karen Khachanov of the Russian Olympic Committee.

Djokovic came back on the court a little more than an hour later to play with Serbian partner Nina Stojanovic in the mixed doubles semifinals and lost that match, too, getting beaten by the Russian duo of Elena Vesnina and Aslan Karatsev 7-6 (4), 7-5.

Megan Rapinoe converted the deciding penalty in a shootout and the United States advanced to the semifinals of the women’s Olympic soccer tournament 4-2 following a 2-2 draw with the Netherlands.

United States goalkeeper Alyssa Naeher stopped Vivianne Meidema’s opening attempt in the shootout. She then saved a shot from Aniek Nouwen before Rapinoe put her penalty away.

The United States will next face Canada, which advanced to the semifinals 4-3 on penalties after a scoreless draw with Brazil in Rifu.

Russian Evgeny Rylov has completed a backstroke sweep at the Tokyo Olympics. Rylov added the 200-meter backstroke title to his victory in the 100 back, winning with an Olympic-record time of 1 minute, 53.29 seconds.

The silver went to American Ryan Murphy in 1:54.15, while Luke Greenbank of Britain grabbed the bronze in 1:54.72.

Murphy was a double-gold medalist at the 2016 Rio de Janeiro Games, extending America’s dominance of the backstroke events that went back to 1992.

Rylov ended the U.S. winning streak with his two golds in Tokyo. Murphy settled for a bronze and silver this time.

Selemon Barega of Ethiopia won the first track and field gold medal of the Olympics with a victory in the men’s 10,000 meters.

A faulty exchange in the Olympic debut of the mixed 4x400 relay nearly cost the U.S. a spot in the final.

The U.S. breezed to a victory in the first qualifying heat of the relay, but was disqualified because of a bad pass between Lynna Irby and Elija Godwin.

The U.S. team appealed and was reinstated and placed directly into the final. USA Track and Field did not give details of the reason for the appeal.

The decision could give Allyson Felix a chance to win her record-setting 10th Olympic medal. She is currently tied with Jamaican Merlene Ottey for the most for a female Olympian.

The U.S. has now won 51 consecutive games going back to the bronze medal game in the 1992 Olympics, although the team has looked far from sharp in its first two games at the Saitama Super Arena.

American BMX racer Connor Fields was awake, stable and awaiting further medical evaluation at the hospital after a violent crash on the first lap of his qualifying heat.

The reigning gold medalist slammed into the turn coming off a jump and was hit by two other riders.

Medical personnel raced onto the course to attend to him before carrying him away on a stretcher to an ambulance at Ariake Urban Sports Park.

The 28-year-old from Las Vegas qualified for the finals despite the crash but was not able to race.

Paula Reto of South Africa has tested positive for COVID-19 and won’t play at the Olympic women’s golf competition next week at Kasumigaseki Country Club. She had not yet left for Tokyo.

She is the first female golfer with a positive test. The men’s competition lost Jon Rahm and Bryson DeChambeau to positive test results.

Reto has been replaced in the 60-player field by Diksha Dagar of India.

Canada's rowing team ended the U.S. run of three consecutive gold medals in the women’s eight and New Zealand claimed three medals, including Emma Twigg’s long-awaited victory in the women’s single sculls and a win in the men’s eight, to dominate the last day of rowing.

With the U.S. finishing fourth in both the women’s and men’s eight, the American rowers leave Japan empty-handed.

Canada won its first gold medal in women’s rowing since 1996.

U.S. women’s water polo captain Maggie Steffens broke the Olympic scoring record when she scored in the third period against the ROC, as the Russian team is called.

Steffens was all alone in front for her 48th career goal in the Olympics, snapping a tie with Tania Di Mario of Italy for the top spot. Steffens scored again on the next possession to help the U.S. open a commanding 13-3 lead. The Americans won the match 18-5.

Women’s water polo was first introduced to the Olympic program for the 2000 Sydney Games.

The 28-year-old Steffens is going for her third consecutive gold medal.

Americans April Ross and Alix Klineman have moved on to the Olympic beach volleyball knockout round after having just a little bit of trouble against the Netherlands.

Starting in a drizzle and finishing in a downpour, the No. 2 seeded Americans lost the opening set of the match 22-20. It was the first set they have lost in the Tokyo Games. They trailed 12-9 in the second before scoring four straight points and seven of the next eight to make it 21-17.

In the tiebreaking set, they pulled away to beat the winless Dutch pair of Sanne Keizer and Madelein Meppelink 15-5.