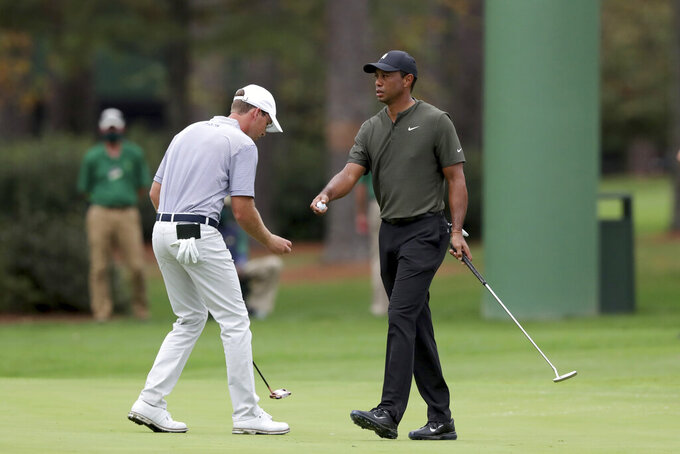 Tiger Woods, right, walks away after a birdie the 15th hole as Andy Ogletree prepares to putt during the first round of the Masters golf tournament Thursday, Nov. 12, 2020, in Augusta, Ga. (Curtis Compton/Atlanta Journal-Constitution via AP) 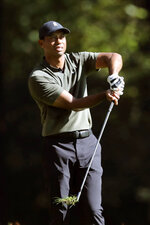 Defying his lackluster form not to mention a history of slow starts at these hallowed grounds, Woods shot a bogey-free 4-under 68 on Thursday in the opening round of the Masters, a tantalizing display by the defending champion in his quest for a record-tying sixth green jacket.

“I did everything well,” Woods said. “I drove it well, hit my irons well, putted well.”

Nineteen months after a stunning Augusta triumph, Woods and his green jacket returned for a pandemic-delayed tournament being played deep into fall rather than its traditional spot at the beginning of spring.

Woods hasn't played much this year, returning warily from a five-month layoff to play a half-dozen tournaments leading up to the Masters.

The results were not encouraging

Woods' highest finish was a tie for 37th at the PGA Championship. He failed to qualify for the Tour Championship. He missed the cut at the U.S. Open. He tied for 72nd — beating just three players — in the Zozo Championship at Sherwood, a course that has always been one of his strongest.

But something always seems to click in Woods' game as soon as he drives down Magnolia Lane.

“I think that understanding how to play this golf course is so important,” he said. “I've been lucky enough to have so many practice rounds throughout my career with so many past champions, and I was able to win this event early in my career and build myself up for the understanding that I’m going to come here each and every year.”

Even in the best of times, Woods usually gets off to a sluggish start.

It was only the second time he's broken 70 in the opening round at Augusta, matching the 68 he shot to begin the 2010 Masters.

More telling, it was his first bogey-free round in a major championship since the 2009 PGA Championship at Hazeltine.

There was really only one shot that Woods wanted back.

Finishing up on the front side, he was in perfect position to set up another birdie with a wedge to the par-5 eighth hole. He wound up settling for par after the ball landed on the wrong shelf of the long, tiered green.

“Other than that, I just did everything well,” Woods said. “The only thing I could say is that I wish I could have made a couple more putts. I missed everything on the high side.”

But that was just nitpicking. Like so many of his competitors, Woods took advantage of prime scoring conditions on a day that turned sunny and unseasonably warm — with barely a flicker of a breeze — after a morning storm moved through Augusta, forcing a delay of nearly three hours.

“I got off to a fast start today, which is good, but I think everyone is,” Woods said. "Everyone is going low out there today. With these conditions, you have to. You have to be aggressive. There’s no reason why you can’t fire at a lot of the flags.”

Woods was three shots behind Paul Casey on an incomplete leaderboard. Roughly half the field was set to return Friday morning to complete the round.

Everyone was searching for the right formula to shine in a most unusual Masters.

Because of the pandemic, there were none of the customary roars from tens of thousands of patrons. Attendance was restricted to a few hundred workers, club members and close family. With only an occasional smattering of applause, the atmosphere was more akin to a nondescript amateur tournament than one of the world's most famous sporting events.

“It’s so different,” Woods said. “The electricity is just not there.”

He did his best to generate some.