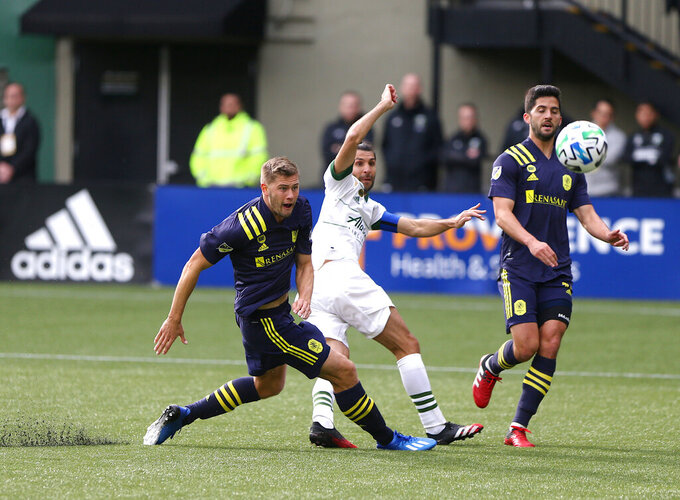 File-Portland Timbers' Diego Valeri, center, shoots for a goal against Nashville SC in an MLS soccer match in Portland, Ore., Sunday, March 8, 2020. Having watched the MLS is Back tournament from afar because of coronavirus cases, FC Dallas and Nashville SC are grateful for the chance to play when they meet Wednesday, Aug. 12, 2020, for the resumption of Major League Soccer's regular season.(Sean Meagher/The Oregonian via AP, File)

Having watched the MLS is Back tournament from afar because of coronavirus cases, FC Dallas and Nashville SC are grateful for the chance to play again when they meet Wednesday for the resumption of Major League Soccer's regular season.

There will be fans — albeit a limited number because of the pandemic — at Toyota Stadium in Frisco, Texas, for the first MLS match outside of Florida's protective tournament bubble since the league was shut down in early March. The two teams will meet again Sunday.

FC Dallas withdrew from the tournament shortly before it started last month after 10 players and a coach tested positive for COVID-19. Expansion Nashville followed soon thereafter with nine cases among its players.

Dallas coach Luchi Gonzalez said whether either team has full fitness, good rhythm or perfect tactics for the restart is secondary.

The league's 26 teams are resuming the regular season in local markets with each team playing an abbreviated schedule heading into the playoffs. The MLS Cup championship game is set for Dec. 14.

The plan allows for fans at games in those markets where local jurisdictions allow them. FC Dallas can have some 5,100 fans at the 20,500-seat Toyota Stadium. Fans must wear masks and follow other guidelines.

But the move comes as cases around the nation continue to grow: More than 5 million Americans have tested positive for COVID-19 and there have been more than 163,000 deaths. It also comes as major college conferences, including the Big Ten and the Pac-12, postpone fall sports out of caution.

Nashville and Dallas will play each other three times in addition to the 18-game schedule. That's because the group stage games at the MLS is Back tournament counted toward the regular season standings for the other 24 teams.

The monthlong tournament was played without fans at ESPN’s Wide World of Sports complex at Walt Disney World. Players and team personnel were sequestered at two Disney resorts. Apart from the Dallas and Nashville outbreaks, only two other players tested positive, one from Sporting Kansas City and one from Columbus.

Like in the bubble, the league has a comprehensive medical and testing protocol for the in-market games. Visiting teams will fly in and out on game day on charters to reduce contact with the public at hotels and restaurants.

In announcing the continuation of the season, Commissioner Don Garber said he won't hesitate to shut it down again if circumstances merit it.

“I’m confident that we have a good plan. I’m confident in our players adhering to that plan,” Garber said. “And if it doesn’t work, well then we’ll address it at that time.”

MLS is still working out the season for the Canadian teams because of quarantine mandates in that country.

Nashville coach Gary Smith said the players couldn't be blamed if they were down after a five-month layoff. Like the rest of the league's teams, expansion Nashville got in two games before the season was suspended in March.

“I think what we’d all agree that we’ve navigated some really troubled waters at this point. And we’re now on the cusp of of playing our first game again in five months,” Smith said. “I think a lot of adrenaline and positive emotion, come what may, will get us through this first game. And some of the conditioning, I hope, will prepare them to recover and be ready for Sunday’s game and further on.”