FDU going against the norm by adding sports, not axing them 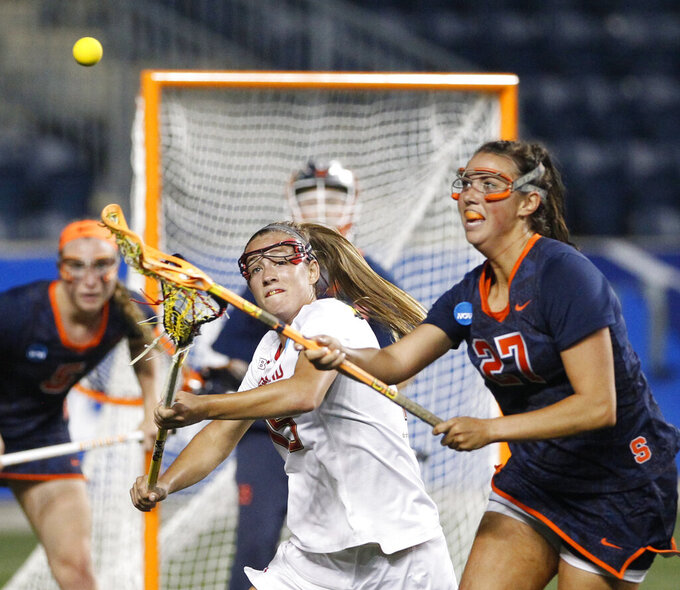 FILE - Maryland's Jen Giles, center, and Kelly Cross, right, of Syracuse, compete for the ball during the first half of a semifinal in the NCAA Division I women's lacrosse tournament in Chester, Pa., in this Friday, May 27, 2016, file photo. Brad Hurlbut took over as the athletic director at Fairleigh Dickinson in 2019, planning to increase the number of sports played at the small Division I school a short ride from New York City. In a little over two years, Hurlbut has taken his first step, announcing last month that men's volleyball will be added in 2021-22 and women's lacrosse would follow the next year.(Charles Fox/The Philadelphia Inquirer via AP, File)

TEANECK, N.J. (AP) — Brad Hurlbut took over as athletic director at Fairleigh Dickinson in 2019, planning to increase the number of sports played at the small Division I school a short ride from New York City.

In a little over two years, Hurlbut has taken his first step, announcing last month that men's volleyball will be added in 2021-22 and women's lacrosse would follow the next year. The additions will give private school in northeast New Jersey 21 sports.

While that wasn't unexpected, the timing was.

The announcement occurred as many schools and universities have cut sports programs as past of the economic fallout from the coronavirus pandemic.

Sports has been hit hard in many places. Through Jan. 19, The Associated Press found some 285 NCAA and NAIA athletic teams had been eliminated because of budget cuts or school closures. Some of the schools cutting programs included Stanford, Clemson, Minnesota, Fresno State, Iowa and Connecticut.

Games and matches have been held in mostly empty arenas and stadiums, drastically reducing ticket revenue. Professional and college leagues have had to deal with daily COVID-19 testing, postponements and cancellations, the biggest in college being the decision not to hold the money-making NCCA basketball tournaments a year ago. It's the lifeblood for many schools.

Hurlbut says FDU President Christopher Capuano, a proponent of sports expansion, gave him an odd look when he told him it was time to expand.

“He wanted to see the economics behind it,” Hurlbut said.

The spreadsheet Capuano got was an eye-opener. It suggested that adding sports at a mid-major Division I school would end up adding hundreds of thousands of dollars to the ledger in time.

Hurlbut said many schools have been cutting 20% across the board in all departments to balance the budget.

“That was an easy way to make ends meet,” he said. “We didn’t want to do that. We wanted to look at it from a different lens and say: ’Hey, if we use this formula, we’ll actually be able to be starting to be revenue drivers and help in the enrollment process, which so many schools like ours that are out there need.”

Andrew Schwarz, a sports economist with the California-based firm of OSKR, worked with FDU — enrollment 8,944 at its four campuses — on the expansion. He said the concept is not new for schools driven by enrollment, provided they had space in the classrooms and dormitories for the athletes. Many Division III schools have employed the concept to increase tuition and room and board revenue.

Schwarz said it will work on the Division I level, where schools get extra money from the NCAA for every sport they offer over the minimum of 14.

In FDU's case, they explained, men's volleyball doesn't need a new venue built because a court already exists. The expenses were basically coach, staff and equipment, much of which will be offset by a $200,000 grant from First Point Volleyball Foundation.

There are roughly 20 players on a team. The Knights would be allowed to give 4 1/2 scholarships. The other 15 1/2 players will pay for tuition, books, room and board, if needed, and whatever fees are associated with attending the school. The average cost is roughly $50,000, although the school reduced the cost $10,000 this year.

The exercise was similar for women's lacrosse. It will give a maximum of 12.6 scholarships for a roster of about 40 players.

Again, more money in than out.

Schwarz and Hurlbut agreed schools that have students pounding on the door for admission would not be good candidates for adding sports. But they say many other schools could benefit.

“Once someone does something, you know, like once the Red Sox won a World Series with Moneyball, it caught on a lot more than when the A’s were doing it,” he said. “The fact that we now have a D-I school doing this, maybe other schools who were thinking about dropping sports or going Division III might try convince their president we would make more money doing this.”

Economist Andrew Zimbalist of Smith College said having existing facilities and nearby opponents and being efficient will help midsize schools adding sports.

“I wouldn’t predict that this is a revenue generator but, by the same token, if it's only a small revenue loss or financial loss, the addition of these sports is probably a good thing for the student body," Zimbalist said.

David Carter, an associate professor at Southern California's Marshall School of Business who specializes in sports business and strategic marketing, said adding sports will help a school maintain or build its brand in the current hard times. It also might yield a fundraising opportunity — if it lasts.

“Once you do something like this, you really need to make sure that is sustainable,” Carter said. “There is nothing worse than running something up the flagpole with all the benefits and all the accolades, only to have to drag it back down the flagpole in a year or two where that appears to be a failed stunt.”

Some college and universities have reinstated sports eliminated in earlier cost-cutting moves. Some did it to take a second look, others because Title IX issues were raised.

Dartmouth College brought back five sports after being accused of not being in compliance with the federal law that guarantees equitable opportunities for women in sports. The cuts had been made to reduce a projected $150 million deficit. William & Mary gave seven Division I sports cut in September a reprieve in November, pending a gender equity review and a search for a long-term plan to keep them viable.

Lenny Kaplan, the athletic director at the New Jersey Institute of Technology in Newark, said student-athletes are a smart way to fill classrooms. The Highlanders, who joined Division I in 2009, have added 11 sports since Kaplan took over in 2000, the most recent being men's lacrosse in '15.

“Most people want the scholarship at the end of the day, but as they get older, they realize playing in college is a privilege," he said. " So it’s like anything else, if I thought I can get more kids to NJIT by starting esports, I would start esports. I am all for adding sports.”