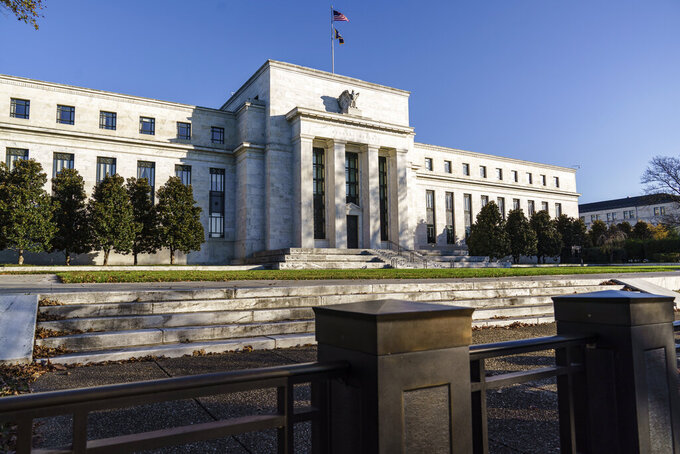 WASHINGTON (AP) — The Federal Reserve said Friday that the 33 largest U.S. banks are in strong shape despite the pandemic’s economic shock.

The banks have ample capital cushions girding them against unexpected losses and that will also enable them to keep lending even under the most severe straits, the central bank said.

The Fed disclosed the results from a special second round of “stress tests” that it added this year because of damage to the economy from the virus outbreak. The pandemic has killed more than 300,000 Americans, closed hundreds of thousands of businesses and pushed unemployment to levels not seen since the Great Depression.

Nine months after the pandemic paralyzed the economy, a resurgence of coronavirus cases threatens its recovery just as the first vaccines are starting to be administered around the country.

The tests showed that all 33 banks remain above their minimum requirements for capital — money they don’t have to pay back to creditors or depositors — to protect against risk, the Fed said.

Still, the regulators decided to maintain restrictions on banks paying out dividends through March. Buybacks of company stock, however, will be permitted again, with some limits.

“The banking system has been a source of strength during the past year, and today’s stress test results confirm that large banks could continue to lend to households and businesses even during a sharply adverse future turn in the economy,” Randal Quarles, the Fed’s vice chair for supervision, said in a statement.

In September, the Fed extended the restrictions on dividends and share buybacks through year’s end, based on stress test results in June that showed how the banks would perform under severe economic conditions if they took those dividend or stock actions.

Increasing dividends costs money. The regulators don’t want banks to shrink their capital reserves and leave the financial system vulnerable during this precarious time for the economy. It was the first time U.S. regulators had ordered such restrictions since the aftermath of the Great Recession a decade ago.

Under the Fed’s latest action, the amount a bank is allowed to pay shareholders or buy back in its stock will be based on the income earned by the bank over the past year. A bank earning no income would not be able to pay dividends or buy back shares in the first quarter of 2021.

A senior Democratic senator objected to the Fed allowing the banks to pay any dividends in the current economic climate or bonuses to executives.

“This public health and economic crisis is getting worse, not better,” Sen. Sherrod Brown of Ohio, the top Democrat on the Senate Banking Committee, said in a statement. “The Fed should be focused on making our financial system safer, not helping Wall Street and big corporations.”

The 33 banks include JPMorgan Chase & Co., Bank of America Corp., Wells Fargo and Co. and Citigroup Inc. — the four biggest U.S. banks by assets. The tested banks all have at least $50 billion in assets.

The Fed said it applied two severe scenarios for the economy in the latest tests to see how the banks would fare. In one hypothetical scenario, the U.S. unemployment rate spikes to 12.5% and then declines to about 7.5%, compared with the current 6.7%. The other calls for a peak jobless rate of 11% followed by a more modest decline, to 9%.

Under both scenarios, the 33 banks would have a total of more than $600 billion in losses on loans, the tests showed.

The tests were mandated by Congress in the wake of the 2008 financial crisis that plunged the U.S. into what was then the worst economic downturn since the Great Depression of the 1930s. They were designed to restore badly shaken confidence in the U.S. financial system. During the crisis, the government created a $700 billion bailout fund to stabilize hundreds of banks, large and small, across the U.S.

Once the economy healed, banking industry profits began steadily rising over the subsequent years and banks were lending more freely.

This story has been corrected to reflect that restrictions on dividends are maintained while stock buybacks are now permitted with some limits.