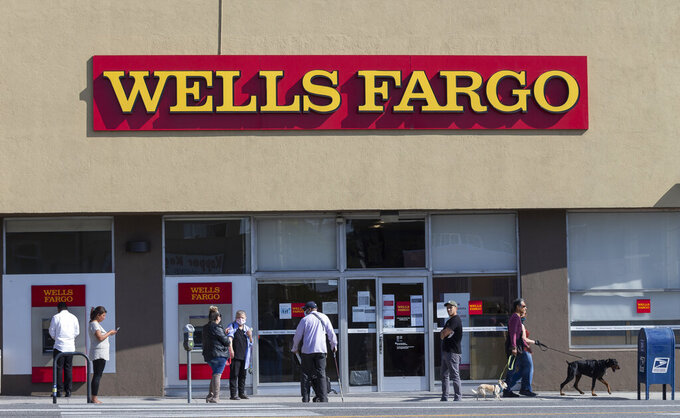 FILE - In this April 3, 2020, file photo, customers, some wearing face masks, line up outside a Wells Fargo branch in the Atwater Village neighborhood of Los Angeles, during the coronavirus outbreak. The Federal Reserve said on Thursday, June 25, 2020, a worst-case scenario for the U.S. economy ravaged by the coronavirus pandemic would cause nation’s 34 largest banks to collectively lose roughly $700 billion. To bolster the banks ahead such a potentially damaging recession, the Fed ordered the banks to suspend stock buybacks and dividend payouts until Sept. 30. (AP Photo/Damian Dovarganes, File)

NEW YORK (AP) — A worst-case scenario for the U.S. economy ravaged by the coronavirus pandemic would cause the nation’s 34 largest banks to collectively lose roughly $700 billion, the Federal Reserve said Thursday.

To bolster the banks ahead of such a potentially damaging recession, the Fed ordered them to suspend buybacks of their own stock and to cap dividend payouts until Sept. 30.

The move comes as the central bank unveiled its latest “stress tests,” which are designed to gauge the resiliency of the nation’s largest banks. The annual tests change every year, and the banks must pass them to start buying back shares or paying out dividends.

Typically the Fed’s testing parameters are hypothetical, such as an international debt crisis or a deep recession. But this year, the Fed based its tests around a very real, and ongoing scenario — the coronavirus pandemic. In the most dire of tests, the U.S. unemployment rate — which stood at 13.3% in May — would peak at 19.5%.

The Fed tested the banks using an economic model simulating a quick downturn and quick recovery, often called a “V-shaped” recession, as well as a slower U-shaped recovery. In the V-shaped scenario, the U.S. economy would contract 31.5% on an annualized basis, only to recover through 2020 and 2021.

The Fed’s worst case scenario, a double-dip recession, would have caused roughly a quarter of all the biggest banks to breach their minimum capital requirements. This scenario would show the U.S. economy contracting by 37.5% on an annualized basis and starting to recover through the summer, but a second outbreak of infections would cause the U.S. economy to slip back into recession.

While their losses would be astronomical, all the banks survive under the Fed’s tests.

The Fed said it was taking actions to “ensure large banks remain resilient” in the face of the pandemic, including stopping the banks from buying back their own shares at least until Sept. 30. Some banks were already doing this, but those voluntary limits would come to an end in the next two weeks.

The Fed is also barring banks from increasing their dividends. Banks will be further limited in their dividend payments based on recent income. Each bank will also be required to revisit its long-term capital plans.

“Today’s actions by the board to preserve the high levels of capital in the U.S. banking system are an acknowledgement of both the strength of our largest banks as well as the high degree of uncertainty we face,” said Federal Reserve Vice Chair Randal Quarles, in a statement.

The Fed’s actions come even as Chair Jerome Powell has noted in recent weeks that U.S. banks are generally in much better shape than they were in the 2007-2008 financial crisis, when they were saddled with hundreds of billions of dollars in bad housing debt. The Fed has bought roughly $2.1 trillion of Treasurys and mortgage-backed securities since the pandemic intensified in March. That has flooded many short-term lending markets with cash, making it easier for many banks to borrow.

The Fed’s tests reflected the same uncertainty surrounding the coronavirus pandemic. The deep drops in economic output and a staggeringly high unemployment rate were just the Fed’s best guesses on how badly the pandemic could impact the nation’s banking system. It also did not take into account any sort of action from Congress or the White House, which has already happened in the form of a massive stimulus bill.

Thursday's tests are part one of two examinations the Fed conducts each year. The banks each submit their own capital plans for the next year — for instance, how much stock they'd like to buy back. The Fed will announce whether it will approve those individual plans. But with today's results and the ongoing pandemic it's unlikely all the major banks will pass their exams as they did last year.