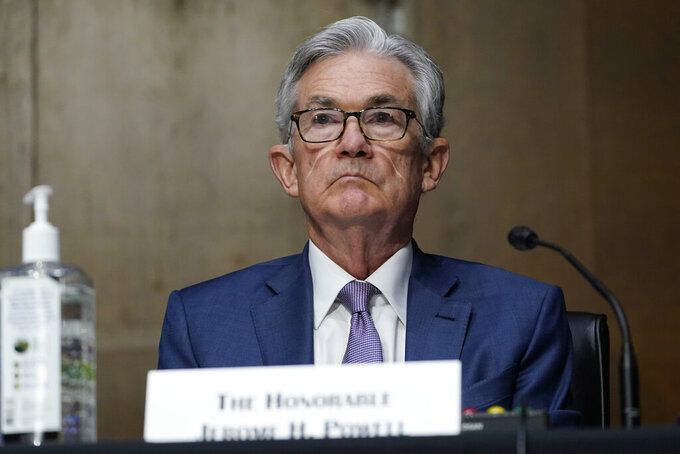 FILE - In this Dec. 1, 2020 file photo, Chairman of the Federal Reserve Jerome Powell appears before the Senate Banking Committee on Capitol Hill in Washington. A Federal Reserve survey has found that the economy was rebounding in late February through early April, helped by billions of dollars in a new round of stimulus payments and the stepped-up rollout of coronavirus vaccines. The new survey released Wednesday, April 14, 2021 showed that the Fed's business contacts around the country were expressing more optimism about the economy's outlook as activity accelerated. (AP Photo/Susan Walsh, Pool)

A Federal Reserve survey has found that the economy was rebounding in late February through early April, helped by billions of dollars in a new round of stimulus payments and the stepped-up rollout of coronavirus vaccines.

The new survey released Wednesday showed that the Fed's business contacts around the country were expressing more optimism about the economy's outlook as activity accelerated.

The survey credited a range of factors, from vaccinations to the payments of up to $1,400 for individuals from the $1.9 trillion relief package that President Joe Biden pushed through Congress last month.

The survey, known as the beige book, will form the basis for discussions when Fed officials meet on April 27-28 to discuss what to do about interest rates.

Gus Faucher, chief economist at PNC Financial, said the message from the beige book is that business activity is picking up but “the economy still has a lot of room to strengthen further.”

While private forecasters have been busy boosting their economic projections for this year, Fed Chairman Jerome Powell has continued to stress that the central bank is not close to raising rates. The Fed released projections last month that indicated it will hold off raising rates until after 2023.

The beige book report, based on information from business contacts supplied by the Fed's 12 regional banks, said that manufacturing activity continued to expand, with half of the Fed districts reporting robust manufacturing growth. Those gains came despite supply-chain disruptions in such critical areas as computer chips.

The survey found that the Fed's regional bank in New York is seeing growth for the first time since the pandemic shut down the economy a year ago and that the expansion is “broad-based across industries."

The Fed’s Philadelphia regional bank found that demand for goods and services is “on fire” but myriad severe supply constraints are continuing to hamper various industries.

Cleveland reported improvements in the hard-hit hotel and restaurant sectors. Similar improvements were reported by the Fed’s Atlanta regional bank, which covers tourist destinations in Florida.

Dallas reported that supply-chain disruptions have led to sharp increases in prices of goods, while the San Francisco district reported that residential construction remains strong.

The Fed survey found that many of its districts are seeing moderate price increases, specifically for materials such as metals, lumber, food and fuel.

The beige book reported that employment growth picked up as economic activity increased. It noted strong job gains in manufacturing, construction, and leisure and hospitality.

In an appearance Wednesday before the Economic Club of Washington, Powell acknowledged rising concerns about inflation following a report Tuesday that consumer prices rose 0.6% in March, the biggest one-month gain since 2012.

But Powell, who has been predicting a temporary spike in inflation this spring, repeated the view that the central bank wants to see inflation rise “moderately above 2% for some time” to make up for a decade when inflation has failed to reach the Fed’s 2% inflation target.