Feds take down Medicare scams that preyed on virus fears 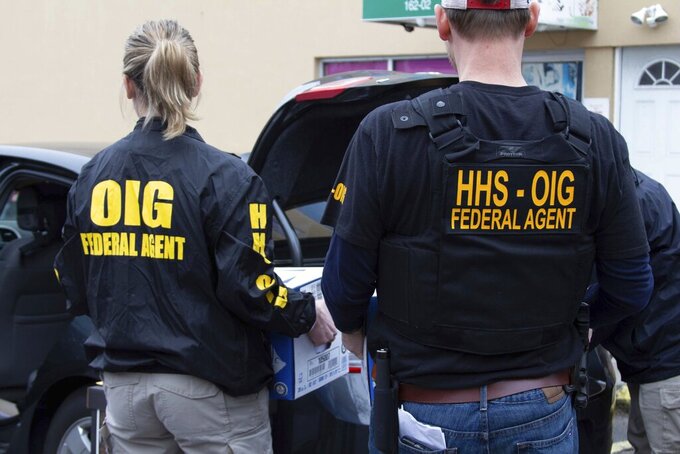 WASHINGTON (AP) — The Justice Department announced criminal charges Wednesday against more than a dozen people from Florida to California in a series of Medicare scams that exploited coronavirus fears to bill tens of millions of dollars in bogus claims.

A common hook involved a pandemic variant of identity theft: Fraudsters allegedly offered COVID-19 tests to get the Medicare numbers of unsuspecting patients, and then used that information to bill for lucrative but unneeded genetic tests that can cost thousands of dollars.

“These schemes, we constantly see them evolve to another level,” said Chris Schrank, assistant inspector general for investigations with the Department of Health and Human Services. “At a time when most American pulled together ... a small percentage of individuals have decided to steal from programs valuable to those who are most in need.”

Wednesday's charges look back to the early months of the pandemic, when there was a high demand for COVID tests still in short supply. Also, Medicare had loosened its restrictive policies on telemedicine consultations, to keep older patients out of medical offices where the virus might spread. And the government had begun pumping out billions in special “provider relief” payments to help hospitals and doctors' offices remain solvent. Scam artists, big and small, allegedly took advantage of all those situations.

Lately the schemes have shifted, and many that are popping up involve fake vaccination cards bearing a likeness of the official HHS logo, Schrank said.

__Michael Stein and Leonel Palatnik of Palm Beach County, Florida, who were charged in connection with a $73 million conspiracy to defraud the government and pay and receive kickbacks. Stein owns a consulting company. Palatnik owns a Texas company that in turn owned and operated testing labs in Dallas and elsewhere. Federal prosecutors alleged the conspiracy involved offering telehealth clinicians access to Medicare recipients for whom they could bill consultations. In exchange, the clinicians would allegedly refer patients to labs owned by Palatnik's company for costly and unneeded genetic tests for cancer and heart problems.

__ Dr. Alexander Baldonado of Queens, New York, who authorities alleged got access to Medicare recipients at an event that advertised virus testing. Baldonado is accused of using the patients' Medicare information to order unneeded genetic tests for cancer. The Justice Department said about $2 million was billed to Medicare as a result.

__ Petros Hannesyan of Burbank, California, owner of a Los Angeles home health agency. He is accused of stealing more than $200,000 from government programs by spending provider relief payments and disaster loans for his own uses. The money was supposed to go for patient care and to support small businesses struggling with pandemic disruptions.

It was unclear whether the people charged had attorneys who could comment on their behalf.

Related to the fraud investigations, Medicare was taking action against some 50 clinicians involved in an assortment of schemes.

Fraud against government health care programs is a pervasive problem that costs taxpayers tens of billions of dollars a year. The true extent is unknown.

Experts say part of the problem is that Medicare is required to pay medical bills promptly, which means money often goes out before potential frauds get flagged. Investigators call that “pay and chase.”

In recent years, Medicare has tried to adapt techniques used by credit card companies to head off fraud. Law enforcement coordination has grown, with strike forces of federal prosecutors and agents, along with state counterparts, specializing in health care investigations.

Wednesday's charges come a little more than a week after Attorney General Garland ordered the establishment of a special task force dedicated to countering COVID-19 fraud broadly. The task force was designed to bring together the Justice Department’s resources with other government agencies against pandemic-related fraud, Garland said in a memo to senior department officials.

The department has brought several cases in recent months focusing on COVID-19 fraud, including one earlier this month against eight people in New York City accused of running a scheme to obtain millions in unemployment insurance benefits that were founded through pandemic assistance programs.

The new task force, being led by Deputy Attorney General Lisa Monaco, will look for trends and examine past enforcement actions, in addition to bolstering efforts to investigate and prosecute criminals both in the U.S. and internationally.

“The multiple health care fraud schemes charged today describe theft from American taxpayers through the exploitation of the national emergency,” Monaco said. “We are determined to hold those who exploit such programs accountable to the fullest extent of the law.”