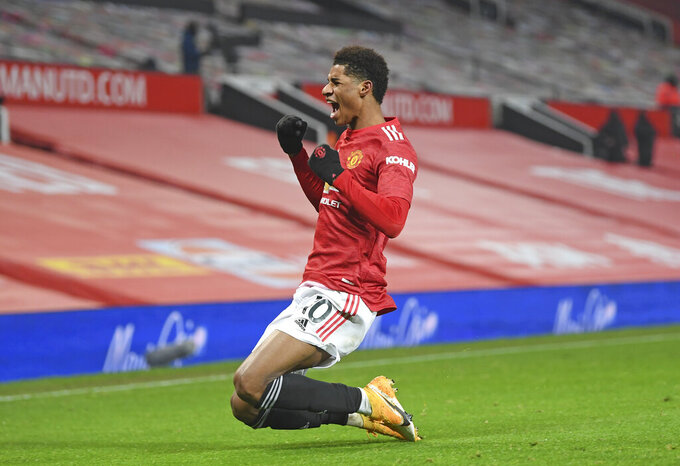 And the 23-year-old England striker said Thursday that legendary United manager Alex Ferguson encouraged him to continue taking on the government over its help for disadvantaged children during the pandemic.

“Probably when other people in sports were telling me not to do it and just focus on football, he said if I believed in that, and I believe it is the right thing to do, then he is behind it,” Rashford said. “Those words from him are an amazing feeling to hear that.”

Ferguson's admiration for Rashford was clear in a video message congratulating the player being the youngest-ever recipient of the Football Writers' Association Tribute Award on Thursday.

Rashford's United debut in 2016 came three years after Ferguson retired. But the manager first saw him as a 7-year-old who then rose through the ranks into the first team.

“Apart from his football life, what he has achieved in the last few months is quite astonishing, how he has helped the people in need is a truly amazing achievement,” Ferguson said. "He has shown to young people in particular there is a different way of dealing with life. He has shown great humility, he has shown courage to do what he did."

In June, Rashford's lobbying led to the government agreeing to keep funding meals for poor students over the summer holidays after initially resisting. Johnson's administration made another abrupt about-face in November by agreeing to continue providing meals to disadvantaged children over Christmas.

This week, Rashford spoke to Johnson after receiving images on social media of the meager amount of food being sent to deprived children while schools are closed during England's third national lockdown.

Food provider Chartwells accepted the quantity has “fallen short" for the amount it was receiving from authorities and offered to add breakfast into parcels from Jan. 25.