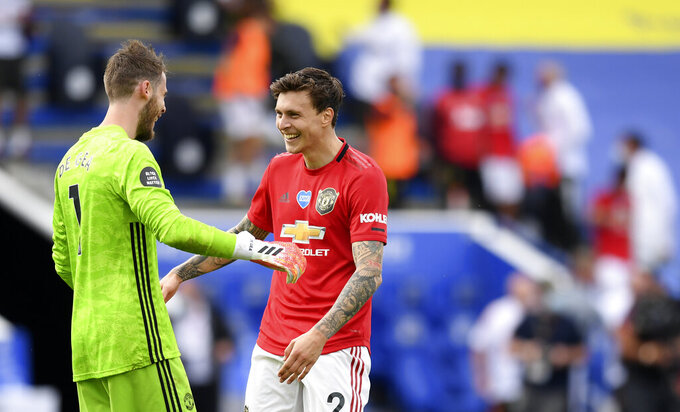 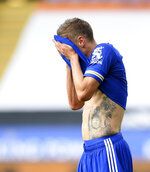 LEICESTER, England (AP) — Six months ago, when the coronavirus outbreak was a distant concern for English football, some things seemed more certain in the Premier League.

Manchester United would struggle to break into the Champions League places while Ole Gunnar Solskjaer remained in charge. Leicester was a team revived under Brendan Rodgers, primed for a return to Europe's elite competition.

Who could've doubted it, with 14 points separating second-place Leicester from United in fifth in January?

But this was a season like no other. By the time it ended Sunday — in July rather than May because of the pandemic-enforced hiatus in play — United was the team in third and Leicester was four points behind in fifth.

A 2-0 victory for Solskjaer's lineup in a final day showdown between the Champions League contenders completed a remarkable turnaround for United and capitulation for Leicester.

“They have taken on so many things, we’ve had our ups and downs,” said Solskjaer, whose team dropped to 14th in October. “It is a wonderful achievement by everyone.”

While United could make 100 million euros ($115 million) from the Champions League after a one-season absence, Leicester won't make half that in the Europa League and could struggle to keep the squad together.

An addition to United's squad in late January has proved integral to its transformation. How fitting that Bruno Fernandes scored the opener at Leicester from the penalty spot in the 71st minute following Anthony Martial being fouled by Jonny Evans and Wes Morgan.

“He’s made a massive impact,” Solskjaer said of the recruit from Lisbon club Sporting for a fee of up to 80 million euros. “He’s been fantastic — scoring goals, creating goals, but also his enthusiasm and mentality around the place has helped.”

Since his debut in a 0-0 draw against Wolverhampton — which followed an abject 2-0 home loss to Burnley when United was booed off by its own fans — United has won a league-leading 32 points. And a league-leading 14-game unbeaten run culminated in the celebrations at the King Power Stadium.

United is a team more accustomed to celebrating trophies — winning the Premier League 13 times from 1993 to 2013 under Alex Ferguson — rather than just qualifying for the Champions League. But United ended up 33 points behind champion Liverpool and 15 adrift of crosstown rival Manchester City.

“To finish third in the Premier League should be a minimum requirement from this club,” captain Harry Maguire said. "But next season we have to keep improving and building.”

A snapshot of Leicester's recent misfortune came in stoppage time when — having had Evans sent off — goalkeeper Kasper Schmeichel's attempt to take the ball past Jesse Lingard only saw the United forward seize possession to roll in the second goal.

How the Foxes have missed injured creative midfielder James Maddison and fullbacks Ricardo Pereira and Ben Chilwell in recent weeks just when they had been reliving the highs of 2016 when the 5,000-1 outsiders won the Premier League.

The goals even dried up for Jamie Vardy, although the 33-year-old striker's tally of 23 was still a league high — winning the Golden Boot — despite three barren games to complete the season.

“It was disappointing, more the way we’ve ended up losing the game, but we said the target at the start of the season behind closed doors was to qualify for Europe and we’ve done that," Vardy said. “To be in with a chance of qualifying for the Champions League was even better, but unfortunately — over the course of the season — it wasn’t to be.”

Defeat to Manchester left the 2016 champions with only nine points from nine games since the league resumed — allowing both United and Chelsea to overtake them.

“We’re disappointed, we’re hurt,” Rodgers said. “We need to improve the level of ambition in terms of our work, improve the consistency.”

How different from March 9 when Leicester beat Aston Villa 4-0 in what turned out to be the last game before the league's shutdown and the last time fans were allowed into a Premier League game.

Even then, Leicester was still third with an eight-point lead over United in fifth.

Not only has Leicester now been shut out of the Champions League, but this central England city is still in lockdown.

While most coronavirus restrictions have been lifted across England, a local lockdown was placed on Leicester in an effort to contain infections which limits residents to only essential travel.

It's a reminder of the ongoing threat posed by COVID-19 to the country and to hopes of an uninterrupted football season — with fans returning to stadiums — when the Premier League begins on Sept. 12.