A festival hit waylaid by the virus, ‘The Climb’ peddles on 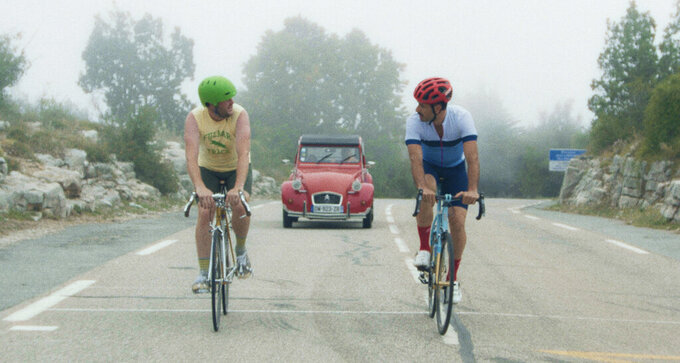 NEW YORK (AP) — “The Climb” is a portrait of a male friendship told in single-shot chapters with cataclysmic happenings — marriage, death, children — in between. With each lurch forward, we have to get our bearings for where Mike (Michael Angelo Covino) and Kyle (Kyle Marvin) are now. Are they still friends? Have either of them matured at all?

Over the past two years, you could do similar check-ins with Covino and Marvin — longtime friends who wrote the film together with Covino making his directorial debut.

Take one. It's May 2019. They're flying high along the French Riviera, basking in the reception for “The Climb.” It's hailed as a breakthrough at the Cannes Film Festival for both Mike and Kyle, and celebrated as a fresh, innovative spin on the buddy comedy.

Take two. It's October 2020. Their movie, several times postponed, is still awaiting release. Joined on a Zoom call, Kyle and Mike are hundreds of miles apart. Mike is staying as his parents house in Connecticut. His arm is in a sling.

“First time I’ve talked to him in months,” says Covino with a grin.

The pandemic has made a mess of countless movie schedules and upended coming-out parties for plenty of filmmakers, but the postponed path for “The Climb” is as awkward as any. After Cannes, Covino and Marvin landed distribution from Sony Pictures Classics, rode the festival circuit and won a Film Independent Spirit nomination. Then four days before the film's theatrical opening in March, cinemas shut down.

“That was the record-scratch stop,” says Covino, who despite claiming otherwise speaks to Marvin nearly every day.

“It’s an ice-dip bath after the glory of going to those festivals," says Marvin, speaking from Los Angeles. ”You’re throwing on tuxes, people are saying crazy things and you’re meeting your heroes in the bathroom."

Covino nods and then, after a beat, asks: “What hero did you meet in the bathroom, Kyle? Elaborate on that.”

“The Climb” will finally make its way into theaters Friday, the culmination in a long, uphill journey for Covino and Marvin, both in their mid-to-late 30s. The two worked for years in commercials and producing independent films before trying to strike out on their own. “The Climb” started as a one-shot, eight-minute short, which plays nearly unchanged as the feature's opening chapter.

The two are on bikes mid-climb on a French country road. It's the day before Kyle's wedding, and he's full of excitement. Despite his huffing and puffing, he's also thrilled about adopting cycling as a more regular hobby. That's when Mike casually mentions that he's sleeping with Kyle's fiancee. Their subsequent argument plays out while they keep biking up the hill, and Mike continues to give Kyle peddling instructions. It's the first in a series of vignettes, mostly in sinuous single shots, that dot years in the life of a sweetly loyal, very possibly toxic friendship.

“There was a whole slew of films that dealt with this subject matter of male love affairs and friendship and that fine line between, ‘Well, we’re best friends but we kinda love each other.’ I love those films, don’t get me wrong,” say Covino. “But I think some of them handled it in more a tongue and cheek way. What we were interested in doing is: No, this isn’t the joke. This is the reality. It’s not a joke that these guys love each other, it’s just the sad state of things that they’re all each other has."

Cycling has more than a cameo in “The Climb.” It's woven into its DNA. Biking even shaped the scripting. When Covino and Marvin hit a wall while writing, they'd go for a ride to clear their heads and talk it over. They took bikes along at film festivals, riding outside Cannes (the setting of the opening scene), peddling through snow at Sundance and riding right up to the red carpet at the oceanside Spirit Awards in Santa Monica, California. Security initially turned them away.

“We were like, ‘We’re not people on the beach,’” chuckles Marvin

“When we were on our press tour, we would travel with our bikes and basically ride from interview to interview,” says Covino. “We would do, like, the morning shows, ‘Good Morning Houston’ or whatever and we would ride into the studio. It was a real schtick. We’d be in full lycra."

Covino's shoulder injury, naturally, is from a biking accident. A while back, he went over his handlebars in New York but only recently got around to surgery. “I figured we’re about to start a press tour right now, why not have a talking point?” laughs Covino.

In terms of timing, Covino and Marvin are luckier than many — they got to show their film in packed theaters pre-COVID — and they don't have any complaints about their situation. The industry took notice of “The Climb," and they've been busy since. They've written a feature and two TV shows; Covino has a small part in the Tom Hanks film “News of the World.”

And the months spent on hold — Marvin compares it to being put in a sleep chamber like in a sci-fi space film — have given them time to figure out how they want to carry on the tone of “The Climb." It's one that combines slapstick with filmmaking agility. In cycling terms, it has its own cadence.

“What we found as we were watching a ton of old comedies that we love that there was just so much being left on the table aesthetically in terms of the choices made. People maybe feel it’s just enough to have traditional coverage and jokes and chop it up, keep the pacing going,” says Covino. “We were like: Why? If you watch Buster Keaton and Charlie Chaplin, these long master shots would play out and it’s the funniest thing you’ve ever seen in your life, and they don’t even move the camera.”