Feyenoord hiring Arne Slot as new coach from next season 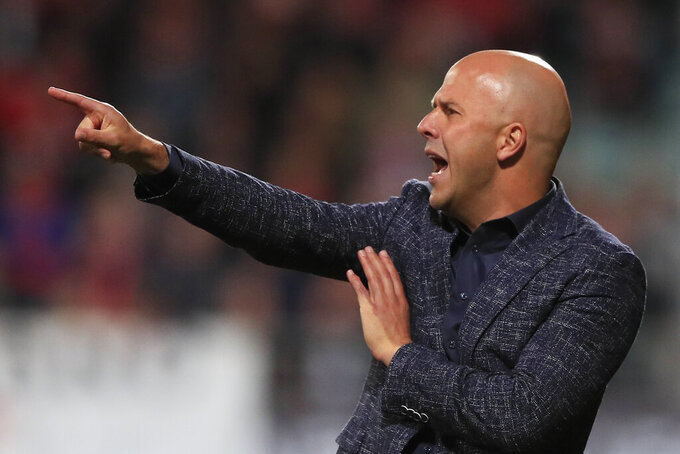 FILE- In this Thursday Oct. 3, 2019, file photo, Alkmaar manager Arne Slot gives directions to his team during the group L Europa League soccer match between AZ Alkmaar and Manchester United at the ADO Den Haag stadium in The Hague, Netherlands. Feyenoord has hired Arne Slot as its new coach starting next season, to replace Dick Advocaat who said last week that this is his last season at the Rotterdam club. Slot was fired last week by AZ Alkmaar amid reports that he was in talks with Feyenoord.(AP Photo/Peter Dejong, FILE)

Advocaat said two weeks ago this is his last season at the club and last as a coach.

Slot was fired by AZ Alkmaar just over a week ago amid reports he was in talks with Feyenoord to succeed Advocaat.

Feyenoord said it and Slot agreed on a two-year contract starting on July 1 with an option for an extra year. Financial terms were not disclosed.

“This move to Feyenoord is a great next step in my career,” Slot said in a statement on Feyenoord's website. "When a top club like Feyenoord calls, you are not only honored but also proud to be able to take this step.”

Feyenoord director Frank Arnesen said Slot developed in recent years into a “successful coach with a recognizable way of playing in which players keep progressing.”

Slot's talented young AZ Alkmaar was level on points with Ajax at the top of the Eredivisie when the 2019-20 season was ended prematurely by the coronavirus pandemic. Ajax, which led AZ on goal difference, went into the Champions League while AZ earned a place in the Europa League, where it was eliminated in the group stage.