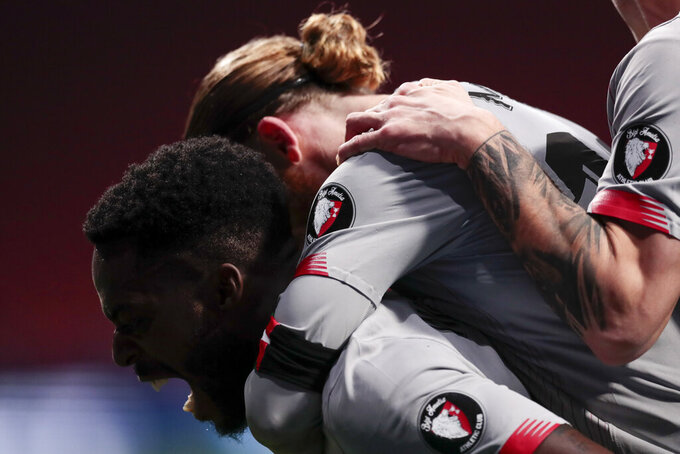 MADRID (AP) — The Basque Country soccer rivalry is peaking, with Athletic Bilbao and Real Sociedad meeting twice in less than a week.

Both are still in contention for European spots in the league, but Athletic has a chance to make history as it will also play in the 2021 Copa final in a couple of weeks.

Last year’s final was postponed because of the coronavirus pandemic. Both finals will be played two weeks apart at the La Cartuja Stadium in Seville.

“We have to enjoy it,” Athletic forward Iñaki Williams said. “It’s not every year that you get to play two Copa finals in a row.”

Authorities tried to delay the 2020 final as much as possible so that supporters could attend, but the pandemic situation in Spain still doesn’t allow for fans at matches.

There were large gatherings of fans from both clubs as they left for the final, with the local government saying thousands were there.

Athletic’s final against Barcelona on April 17 also will be played without fans.

Barcelona and Athletic are the most successful clubs in the Copa. The Catalan club leading with 30 titles, including four in a row from 2015-2018.

Athletic, runner-up to Barcelona in 2015, will be trying to lift the Copa trophy for the 24th time on Saturday.

The team has been revamped since coach Marcelino Garía Toral took over at the beginning of the year. With him in charge, it won the Spanish Super Cup after beating Real Madrid in the semifinals and Barcelona in the final.

Athletic is ninth in the league, 10 points behind fifth-place Sociedad, which is still within reach of fourth-place Sevilla, the team in the final Champions League qualification spot.

“I'm very motivated,” said Silva, who won the Copa with Valencia in 2008. “I would like to give this title to Real Sociedad.”

Athletic hasn’t won the competition since 1984.

“There are no favorites. It will be a beautiful final,” Williams said. “Sociedad has a great team and is having a very good season. We have good momentum and we have shown that we are a very difficult team to beat against any rival.”

In addition to not lifting the trophy on Saturday, the loser will be expected to give its rival a guard of honor in the league game on Wednesday.

Whether that show of respect between the fierce rivals actually happens, though, time will tell.