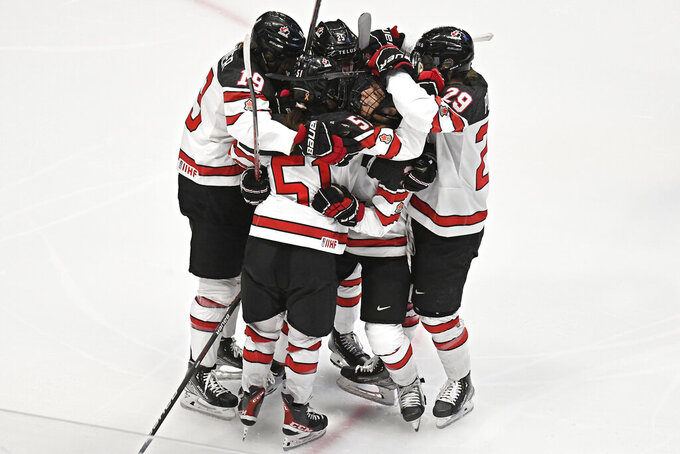 Teammates celebrate with Canada's Victoria Bach after her goal against the United States in the first period of a women's hockey game in a pre-Olympic Games series Monday, Oct. 25, 2021, in Hartford, Conn. (AP Photo/Jessica Hill)

“This is the best that I think our team has felt,” said Kessel, who scored the tying goal as the Americans rallied from a 2-0 deficit before losing 3-2 on Monday night. “We have a really good thing going on inside of our locker room. I’m really confident in our group and I really think that things are coming together inside of our locker room and it is going to show.”

A good place to start would be figuring out how to contain Canada’s Sarah Fillier.

In a heated rivalry dating to the U.S. beating Canada for gold in the 1998 Nagano Winter Games, a newcomer is making her presence felt.

The 21-year-old Fillier, who is delaying her junior season at Princeton, was unaccounted for in scoring a pair of backdoor tap-ins, including the game-winner with 3:58 remaining. Fillier, who also scored in the series-opening 3-1 win at Allentown, Pennsylvania, has six goals and nine points in nine games with the national team since making her debut at the world championships in August.

“She just has a niche for the net, and getting around the net, and finding those spots where she can be successful,” linemate Natalie Spooner said. “I mean, she’s a natural goal-scorer. ... She’s able to find those soft spots and get pucks in.”

The nine-game series between the teams resumes at Kingston, Ontario, on Nov. 21.

Victoria Bach also scored and Renee Desbiens stopped 18 shots. The Canadians won gold over the Americans at the world championships and have won four straight against the U.S. — their best run since a five-game streak from Dec. 3, 2017 to Feb. 15, 2018.

Cayla Barnes had a goal and an assist and Nicole Hensley stopped 17 shots for the U.S.

An intense and sometimes chippy game was decided on an undisciplined high-sticking call against U.S. veteran defender Megan Keller, who cross-checked a Canadian player during a scrum near the benches.

Brianne Jenner set up the goal by driving into the right circle and feeding a wide-open Fillier, who swept in the puck at the left post. It was a mirror image of Fillier’s first two goals of the series, with both coming on tap-ins.

“She’s a talented, fast forward that you have to be aware of,” U.S. defender Barnes said. “But we don’t play her any differently than we play anyone else.”

Though he had not seen a replay, U.S. coach Joel Johnson downplayed Keller's penalty.

The Americans, who gave up two goals on Canada’s first two shots on net on Monday, have yet to enjoy a lead in the two games.

“I think it shows a lot about who we are and who we are trying to be,” Johnson said. “Obviously, we don’t want a slow start like that but the way we responded is important and we have to find that in the beginning of every game.”

The world’s top women’s hockey powers are preparing for the Beijing Winter Games in February, with the Americans attempting to defend their 2018 gold medal. Five of their past eight meetings have been decided by one goal.

NOTES: Three-time U.S. Olympian Kacey Bellamy was honored during a pregame ceremony in which USA Hockey officials presented her a No. 22 jersey. Bellamy retired in May 2020. ... The U.S. has a hole in its schedule after a COVID-19 lockdown forced Russia to pull out of a three-game series in Belfast, Northern Ireland, starting on Nov. 9. “It’s the world we’re living in today. We just need to learn to adapt and adjust,” said Katie Million, USA Hockey’s director of women’s national team programs. Million is attempting to schedule another opponent, though the games aren’t likely to be played in Belfast. ... USA F Abby Roque did not play and was spotted walking on crutches on Sunday. She fell awkwardly on her right ankle during the third period on Friday.