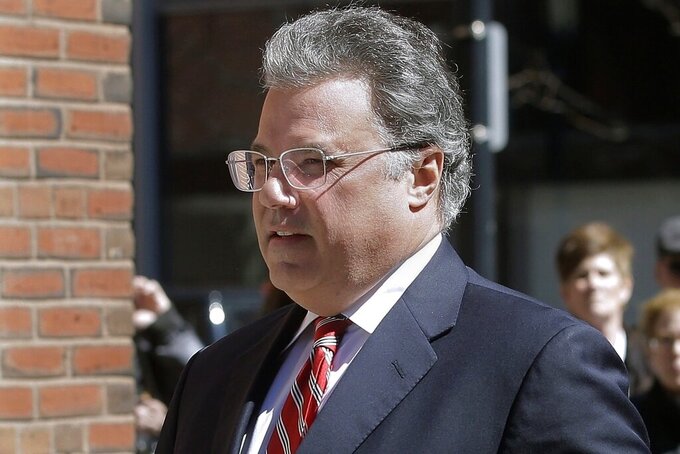 FILE - In this April 3, 2019 file photo, Manuel Henriquez arrives at federal court in Boston to face charges in a nationwide college admissions bribery scandal. Henriquez is scheduled to be sentenced via video on Wednesday, July 29, 2020, after pleading guilty. (AP Photo/Steven Senne, File)

The founder of a Silicon Valley venture capital firm was sentenced Wednesday to six months behind bars for paying about $450,000 in bribes to boost his two daughters' entrance exam scores and get one of them into Georgetown University as a bogus tennis recruit.

Manuel Henriquez, the 57-year-old founder and ex-CEO of Hercules Capital based in Palo Alto, California, cried and dabbed his eyes with a tissue as he prayed for forgiveness from his children and other families he hurt, and asked the judge for mercy.

“There is no perfect way to express how broken I feel in my heart and soul,” said Henriquez, who sat next to his lawyer and wore a face mask for much of the hearing held via videoconference because of the coronavirus pandemic.

His wife, Elizabeth Henriquez, was sentenced in March to seven months behind bars. She is currently locked up at a prison in California and is expected to be released in January, according to online records.

Prosecutors had asked for five months for Manuel Henriquez, calling him in court documents a “less active participant in the mechanics of the fraud than his wife.” The defense urged the judge for three months or less.

U.S. District Judge Nathaniel Gorton called Henriquez a hypocrite who donated money to aid children, while at the same time using his wealth and privilege to put his kids ahead of other less fortunate students in the college admissions process.

The couple paid about $50,000 bribes to have someone cheat multiple times on standardized tests for their daughters, authorities said.

The Henriquezes were also charged with paying $400,000 to the sham charity run by admissions consultant Rick Singer to get their oldest daughter into Georgetown by falsely portraying her as a star tennis player. Singer in turn paid then-Georgetown tennis coach Gordon Ernst in exchange for labeling her as a recruit, authorities say.

Ernst, who's accused of getting nearly $3 million in bribes, has pleaded not guilty.

Singer has pleaded guilty to running the sprawling bribery scheme and helped investigators build the case against the parents.

Henriquez's lawyers said in court documents that his participation in the scheme was “minor and largely passive” as he was busy running his company while his wife “devoted herself to the care and well-being of their children.”

"Mr. Henriquez knew some but not all of the details of the scheme with Singer, played a small role, and to his great regret and shame, did not stop it. He paid Singer’s bills, as he did all the family’s bills," his lawyers said in a court filing.

Assistant U.S. Attorney Eric Rosen said it “strains credulity" that Henriquez would believe that the $400,000 payment to Singer's sham charity would support "underfunded college athletic programs (including Georgetown tennis) and programs for disadvantaged youth," as his attorneys claimed in court documents.

Rosen accused Henriquez of refusing to fully accept responsibility for his actions and attempting to present a "sanitized version of the conduct to the court."

The Henriquezes are among nearly 30 parents who've admitted to charges in the massive case called “Operation Varsity Blues.”

“Full House” star Lori Loughlin and her fashion designer husband, Mossimo Giannulli, are scheduled to be sentenced in August after pleading guilty to paying half a million dollars to get their two daughters into the University of Southern California as fake crew recruits. Loughlin's plea deal calls for her to serve two months behind bars and Giannulli's calls for him to serve five months.