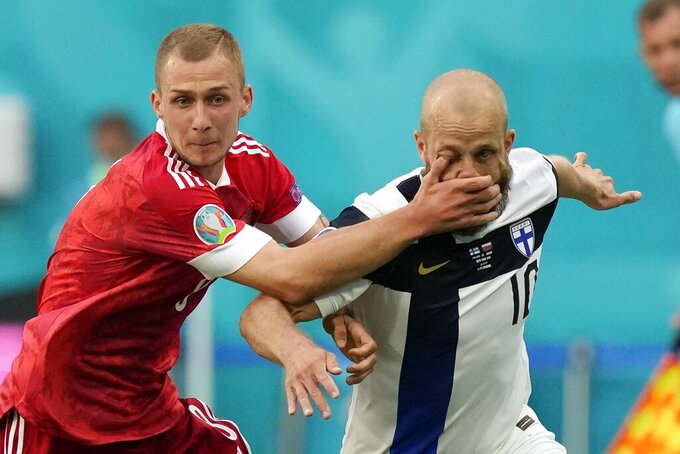 HELSINKI (AP) — Finnish health authorities have detected a spike in coronavirus cases that has been traced to soccer fans returning from neighboring Russia following European Championship matches in St. Petersburg.

The Finnish Institute for Health and Welfare on Saturday urged “all passengers who have traveled from St. Petersburg to Finland by any bus company to apply for a coronavirus test.”

“Any bus or minibus may have been exposed,” the institute said.

Finland played two of its Euro 2020 group games in St. Petersburg, facing Russia on June 16 and Belgium on Monday. At least 2,000 Finns are estimated to have traveled to the city for those matches.

Authorities in the Russian city tightened anti-coronavirus restrictions last week in an effort to curb a spike in new infections. That included closing food courts in the city’s shopping malls and its Euro 2020 fan zone.

The Finnish health institute’s director, Mika Salminen, told public broadcaster YLE that more than 120 virus cases have so far been detected from passengers returning from St. Petersburg, mostly soccer fans, and the number is likely increase.

Though the Finnish Border Guard was prepared for heavy return traffic from St. Petersburg, the key Vaalimaa border station got badly jammed Tuesday with lines of dozens of buses carrying soccer fans and hundreds of cars waiting for the required coronavirus test after border formalities.

As the queue got longer and the border station was to be closed, Finnish authorities decided to let passengers into the country without testing, on the condition they would take one at their respective home region after arrival.

Finnish health officials said earlier this week that they traced some of the infections to a German beer hall-style restaurant in St. Petersburg.

There are two main crossing points between the countries in eastern Finland, making it a trip of between 180-220 kilometers (112-135 miles) from the border to St. Petersburg.

According to the latest information from Russia’s national coronavirus taskforce, there were 8,457 new infection cases in Moscow and 1,247 in St. Petersburg detected in the past few days.

Finland is one of the least affected European countries by coronavirus with just under 95,000 cases and 969 deaths detected since the start of the pandemic. The 1,340-kilometer (832-mile) long Finnish-Russian land border has been closed for passenger travel from both sides since March 2020 and remains so with certain exceptions, such as traveling to Euro 2020 matches.