Fire breaks out at squalid migrant camp in Bosnia 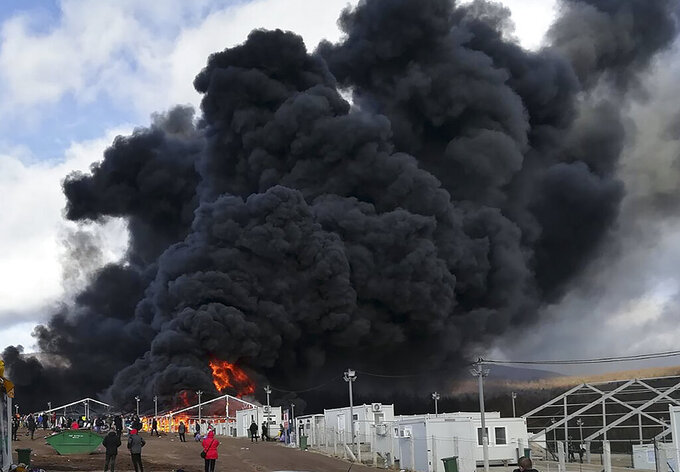 Smoke rises from a fire at migrant camp Lipa, Wednesday, Dec 23, 2020, near Bihac in western Bosnia. A huge fire has broken out at a migrant camp in northwestern Bosnia which has been in the focus of rights groups because of poor conditions in the tent facility.  Thick black smoke could be seen rising Wednesday from parts of the Lipa camp near the Croatian border which currently houses some 1,200 migrants.  The cause of the fire was not immediately known as migrants were seen running away in panic. There were no reports of injuries. (AP Photo/Hasan Arnautovic)

BIHAC, Bosnia-Herzegovina (AP) — A huge fire broke out Wednesday at a temporary migrant camp in northwestern Bosnia that has been strongly criticized by rights groups as unsuitable due to its lack of resources. Officials said former residents started the blaze.

Thick black smoke rose from the Lipa tent camp near the Croatian border that once housed 1,200 migrants. Residents were seen running away in panic from the fire but no injuries were immediately reported.

Bosnia has become a bottleneck for thousands of migrants hoping to reach neighboring European Union member Croatia and then head toward richer EU nations. Most are stuck in Bosnia’s northwestern Krajina region as other areas in the ethnically divided nation have refused to accept them.

The Lipa camp was to be closed on Wednesday and moved to another location, but officials said that since its tents and other facilities were almost entirely destroyed in the fire it cannot immediately be moved to another spot.

“As far as we know now, a group of former residents put three tents and containers on fire after most of the migrants had left the camp," said the International Organization for Migration's chief of mission in Bosnia, Peter Van Der Auweraert.

“Luckily, no casualties to our knowledge at this point but disaster nevertheless," Van Der Auweraert said on Twitter.

He later told reporters the fire was under control, but that most of the camp was either destroyed or damaged. He said most camp residents were still around the area because “there's no alternative accommodation available” in Bosnia for them.

He said some migrants planned to head to Croatia as “quickly as they could,” some were aiming to travel to the Bosnian capital of Sarajevo while others intended to stay in the Bihac area through the winter in squatter's camps.

Witnesses said the fire appeared to have started in a fuel storage facility and then quickly spread to the tents where the migrants lived.

Natasa Omerovic, the camp director, told the Bosnian Klix.ba. news portal that the arson started because the planned closure of the camp had triggered anger among migrants.

“As we see, the tents are being set on fire in a chain action, and I think we are talking about vandalism," she was quoted as saying. “The migrants are upset and angry, we can hear them cursing the state."

The Lipa camp was only set up as a temporary shelter during the summer to cope with the coronavirus pandemic.

The EU has warned Bosnia that thousands of migrants face a freezing winter without shelter, and it urged the country’s bickering politicians to set aside their differences and take action. Thousands of people have been sleeping outdoors in makeshift tent camps or abandoned houses with no facilities in the area, which saw the first snow earlier this month.

Many migrants in Bosnia have also alleged pushbacks and violence at the hands of Croatian border police.