In firm conditions, Masters in November a distant memory 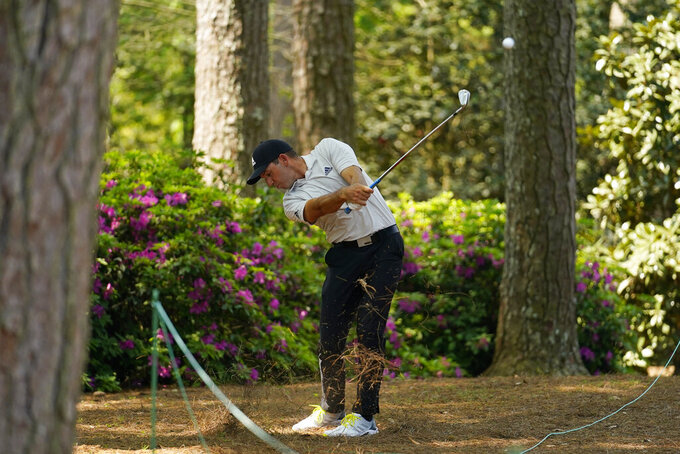 Sergio Garcia, of Spain, hits out of the rough on the 14th fairway during a practice round for the Masters golf tournament on Wednesday, April 7, 2021, in Augusta, Ga. (AP Photo/Matt Slocum)

AUGUSTA, Ga. (AP) — No one needed to see the colorful blooms at Augusta National to realize this will be a much different Masters than the last one. It was the color of the greens.

They were yellow. On Wednesday.

The excitement of the first major of the golf season was mixed with no small measure of trepidation about the test Augusta National might present this week without intervention and a little precipitation.

Fred Couples, who played his first Masters in 1983 and is competing for the 36th time, played a practice round Wednesday with Rory McIlroy.

“Rory said it five times: ‘Have you ever seen the greens like this on Wednesday?’ And five times in a row I said, ‘No,’” Couples said. “He was laughing. So I think if it stays like this, come even Friday, Saturday, Sunday, I mean, honestly, a 70 or 71 will be a heck of a score.”

A score like that would have meant getting lapped in November, when the Masters had to take an autumn date after it was postponed because of the COVID-19 pandemic.

Dustin Johnson played conservatively along the back nine because he had a big lead, and he still finished with a record score of 20-under 268 to win by five shots in the lowest-scoring Masters in history.

“I’ve seen some young guys this week have a slightly deer-in-the-headlights look because they’ve walked out on a couple of those greens and they’ve seen the color of them and they’ve felt the firmness,” Paul Casey said. “You can see they're kind of going, ‘Whoa. This is a whole different animal.’”

Still to be determined is what the weather has in store for the rest of the week. The sun has added that scary shine to the putting surfaces starting with the Augusta National Women's Amateur on Saturday — the winning score was at 1-over par. Scattered storms are in the forecast the rest of the way.

For the the 13 players who played the Masters for the first time in November, it's like starting over.

“November is a Masters that we'll probably never see again,” Webb Simpson said. “You know, flying hybrids, 5-woods, 3-woods to the hole and the ball stopping. It's good to forget about that because that's not our normal Masters. It's in a way relearning the nuances.”

Phil Mickelson and Bryson DeChambeau dropped balls left of the 10th green Wednesday morning to play chip shots to potential hole locations. Mickelson is a three-time Masters champion and a wizard with the wedge. After his second shot, he looked over at DeChambeau and said, “Boy, it's tough when it's dry.”

So much about the Masters will be so different, minus expectations of the usual suspects — a little more noise from at least some spectators.

Johnson won the Saudi International for his only victory in six starts this year, though he has been in a bit of a funk the last month. No one is suggesting the green jacket he won in November should come with a footnote given the conditions. He was that much better than everyone else.

But he won't be hitting 5-iron to a left pin on the par-5 second hole for a tap-in eagle like he did in the third round in November, taking on pins that were accessible in such soft conditions. Johnson talked about watching one player in his group hit 3-wood to a left pin on the 15th that landed and stopped near the hole. That's out.

Jimmy Walker said no one could hold a shot on the 15th. He said he and McIlroy each had irons into the 15th that had no chance of staying there.

Masters Chairman Fred Ridley is a past president of the USGA, an organization suspected of being very good at payback. Most notable was Johnny Miller shooting 63 in the final round to win the 1973 U.S. Open at Oakmont. The next year, Hale Irwin won at Winged Foot at 7-over par.

That's the U.S. Open, with a history of par being a winning score, or not far from it. The Masters can be brutal when it's brittle and windy and cold. Zach Johnson won in 2007 in those conditions at 1-over 289, though it was the first time in more than 50 years that no one broke par at the Masters.

“The fact that Dustin was 20 under was a combination of his extraordinary play that at the same time, admittedly, the golf course was soft,” Ridley said. “So it was ready to be played very well with a lot of red numbers. But that really had nothing to do with how the golf course is playing right now.

“I think we have the golf course where we want it."

It all starts Thursday morning with Lee Elder, the first Black golfer to compete in the Masters in 1975, joining Jack Nicklaus and Gary Player for the honorary tee shot. And then the curtain rises on the 85th Masters, which should feel like the Masters of old — even if that's only two years ago.

Johnson was a runner-up to Tiger Woods when the Masters was last held in April in 2019. So was Xander Schauffele, who thinks this year it might be even “crazier.”

“When I say crazier, I mean firmer and faster,” Schauffele said, adding a few minutes later, "I think every guy who plays professionally is a little bit of a masochist, so I'm here for the torture.”