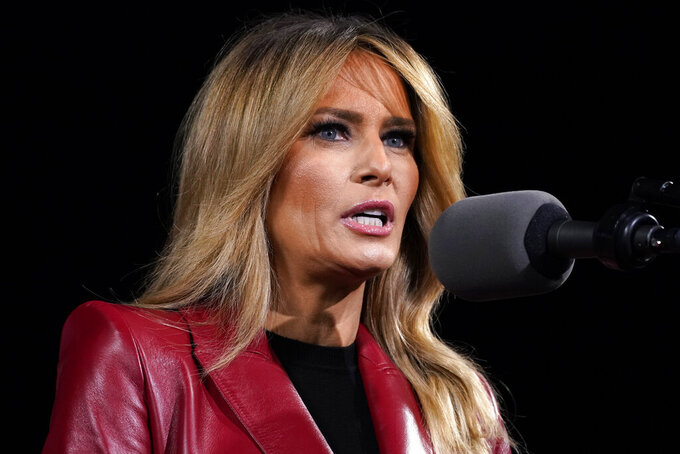 FILE - In this Dec. 5, 2020 photo, first lady Melania Trump introduces President Donald Trump to speak at a campaign rally for Senate Republican candidates, Sen. Kelly Loeffler, R-Ga., and Sen. David Perdue, R-Ga., at Valdosta Regional Airport in Valdosta, Ga. Weeks before her family turns the White House over to President-elect Joe Biden, Melania Trump announced Monday that a tennis pavilion on the south grounds is ready. The project included sprucing up an existing tennis court and children's garden, in addition to replacing a smaller structure with the pavilion. The White House says the project was paid for with private funds and did not disclose the cost. Completion of the tennis pavilion follows the first lady’s redesign of the White House Rose Garden earlier this year.  (AP Photo/Evan Vucci)

Weeks before her family turns the White House over to President-elect Joe Biden, Melania Trump announced that a new tennis pavilion on the south grounds is ready for action.

The project included sprucing up an existing tennis court and children's garden, in addition to building a pavilion to replace a smaller structure.

The first lady's office said Monday that the pavilion's design was inspired by the architectural style of the White House, especially the East and West Wings. A colonnade, parapet wall and fanlight windows tie the new building to the look and feel of the White House.

Planning for the project began in early 2018, followed by approval in June 2019 by the Commission of Fine Arts and the National Capital Planning Commission.

Mrs. Trump helped break ground for the project in October 2019. Construction was in partnership with the Trust for the National Mall and the National Park Service. The new building was funded by private donations. The White House did not disclose the cost.

Earlier this year, as the coronavirus pandemic began to take hold in the U.S., the first lady tweeted photos of herself wearing a hard hat while reviewing blueprints for the pavilion.

Her critics lashed out, with some calling the photos insensitive during the coronavirus scare. She pushed back in a follow-up tweet encouraging “everyone who chooses to be negative & question my work at the @WhiteHouse to take time and contribute something good & productive in their own communities.”

In a written statement Monday, the first lady thanked the “talented craftsmen” who worked on the project and the “generous supporters of the White House.”

“It is my hope that this private space will function as both a place of leisure and gathering for future First Families," she said.

Biden is set to take the oath of office as the nation's 46th president on Jan. 20.

President Barack Obama, an avid basketball player, had turned the tennis court into one suitable for basketball.

President Donald Trump had been a regular spectator at the annual U.S. Open tennis tournament held in his native New York, but he has not attended since taking office.

Completion of the tennis pavilion follows the first lady's redesign of the White House Rose Garden earlier this year.