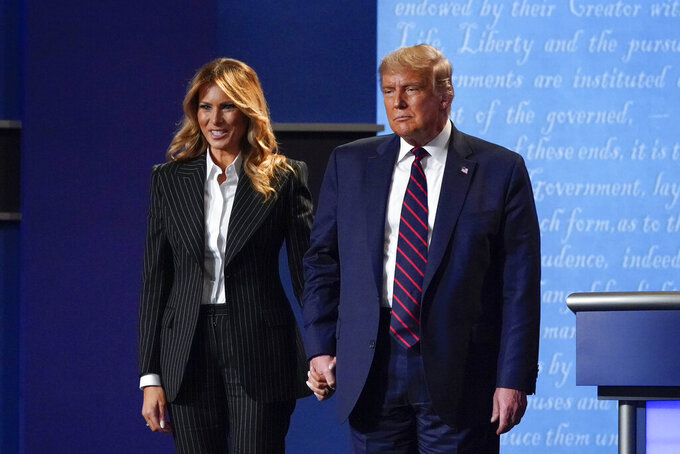 WASHINGTON (AP) — President Donald Trump and his wife received their positive COVID-19 tests on the same day. He's already returned to campaigning, but there's been no public sighting yet of the first lady.

Melania Trump last provided a health update over a week ago after saying her symptoms were mild, and the White House has not indicated when she will make her next public appearance.

What role she will play in the campaign's final weeks remains an open question as Trump embarks on a schedule of daily rallies through the Nov. 3 election.

“My family is grateful for all of the prayers & support! I am feeling good & will continue to rest at home,” the first lady tweeted Oct. 5, three days after the president announced they both had the disease caused by the coronavirus and that they would quarantine.

“Thank you to medical staff & caretakers everywhere, & my continued prayers for those who are ill or have a family member impacted by the virus,” she said.

Before that trip, she attended a Sept. 26 gathering in the White House Rose Garden that is now believed to have been a “super spreader” event for the virus. The president introduced Supreme Court nominee Judge Amy Coney Barrett to scores of guests who sat close together, many without face coverings. Several guests later tested positive for COVID-19.

The first lady's office provided no update Tuesday on her condition. The president's campaign referred questions to the White House.

A possible upside for the White House in the positive test results is that they overshadowed the release of audio recordings by Stephanie Winston Wolkoff, a former confidante and adviser to the first lady, in which Mrs. Trump was heard complaining about having to decorate the mansion for Christmas. She also was heard downplaying the conditions in which migrant children were housed in U.S. detention centers after the administration separated them from their families at the Mexico border.

Wolkoff detailed her falling out with Mrs. Trump in a new book the White House has dismissed as full of “mistruths and paranoia.” Wolkoff also had confirmed she had Mrs. Trump on tape.

David B. Cohen, political science professor at the University of Akron, said the tapes were “damaging” for the first lady's image, especially since the president often bragged that he was singularly responsible for people saying “Merry Christmas” again.

“By keeping her behind closed doors, it makes it sort of a non-story at this point,” Cohen said.

Most coronavirus patients suffer mild to moderate symptoms and recover quickly, typically anywhere from two to six weeks, according to the World Health Organization, though older, sicker patients tend to take longer to get well.

The president’s quicker reemergence again highlights differences in how he, at age 74, and the first lady, who is 50, have approached the pandemic — from mask wearing to travel. The White House has said their son, Barron, 14, tested negative for the virus.

President Trump was admitted to Walter Reed National Military Medical Center for treatment on Oct. 2, and was sent home three days later. He remained out of public view until this past weekend, when he stepped onto a balcony to address a large crowd of supporters who had been invited to the White House lawn to watch him speak.

On Monday, a week after leaving the hospital, the president — who has declared himself “immune” to COVID-19, although the science makes it impossible to know that — resumed the rigors of campaigning at a Florida rally. His White House doctor said Trump tested negative for the virus on consecutive days and was no longer considered contagious.

Trump has an aggressive schedule with campaign rallies set for every day this week in Pennsylvania, Iowa, North Carolina, Georgia and back to Florida.

Former Trump White House press secretary Sean Spicer said Mrs. Trump may want to be a “little bit more selective” about how she reengages after recovery. The first lady is known to be intensely private and someone who operates on her own timetable.

“She just may be taking a different approach to this as well,” Spicer said.

Mrs. Trump has been more consistent about encouraging use of face masks while her husband has vacillated between describing mask-wearing as “patriotic” and criticizing Biden for routinely donning one. Trump was mask-free on Monday. Neither Trump nor the first lady wore masks at the Rose Garden event.

Trump also traveled extensively during the height of the pandemic, including to “hot spot” cities, while his wife waited until mid-September to visit New Hampshire on her first solo appearance outside the Washington area since the outbreak.

She spent a week at Walter Reed military hospital in May 2018 after undergoing an embolization procedure to treat what her office said was a benign kidney condition. Mrs. Trump convalesced at the White House for nearly a month before she resumed a public schedule.