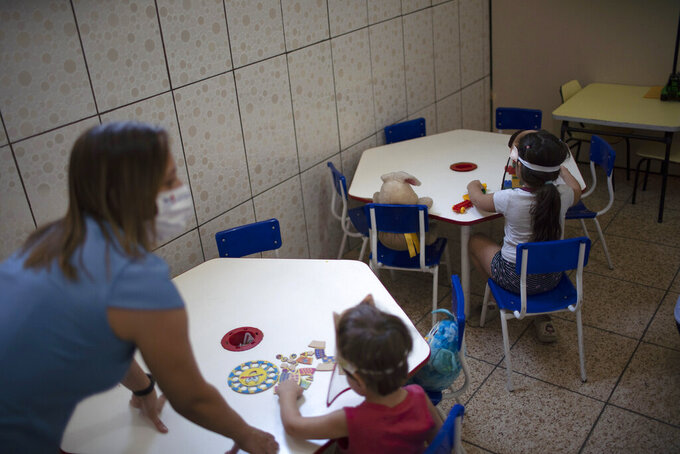 Children wearing face shields as a precaution against the new coronavirus outbreak sit spaced apart in individual tables at the Pereira Agustinho daycare, nursery school and pre-school, after it reopened amid the new coronavirus pandemic in Duque de Caxias, Monday, July 6, 2020. The city of Manaus in the Amazon rainforest and Duque de Caxias in Rio de Janeiro’s metropolitan region, became on Monday the first Brazilian cities to resume in-person classes at private schools since the onset of the COVID-19 pandemic, according to the nation's private school federation. (AP Photo/Silvia Izquierdo)

DUQUE DE CAXIAS, Brazil (AP) — The Brazilian cities of Manaus in the Amazon rainforest and Duque de Caxias in Rio de Janeiro's metropolitan region on Monday resumed in-person classes at private schools, the first large cities to do so since the onset of the COVID-19 pandemic.

Both cities have been hard hit by the virus. Amazonas state’s capital with 2.2 million residents had the sixth-most coronavirus deaths in the country, according to local media G1. Duque de Caxias is home to 920,000 people and has confirmed the third most deaths in Rio state.

Public schools in the two cities, as elsewhere, have yet to reopen.

Brazilian teachers during the outbreak have resorted to sending kids lessons through social media and phone apps, and even television and radio broadcasts. Restrictions put in place to contain the virus' spread are being lifted in varying degrees from city to city, marking a disorderly exit from quarantine.

President Jair Bolsonaro has pushed for economies to kick into gear, often over objections from public health experts who argue infection rates remain high. Many people, likewise, are eager to get back to work.

“We saw the need, the parents requested it; they were going back to the labor market,” said Maria Agostinho, 55, who directs the Happy Little Bear, a daycare, nursery school and pre-school in Duque de Caxias.

The school tested all teachers for COVID-19, and on Monday made hand sanitizer available at the school's entrance and took the temperatures of all its kids. They wear masks and must keep their distance from one another.

“Knowing the commitment we have, they (the parents) requested, begged until we came back to work," Agostinho said.

“Many school owners feel pressured by parents who need to work, and we understand," dos Santos said. Still, school owners and teachers should discuss “to program an adequate, balanced restart to preserve lives.”

Authorization for Duque de Caxias' private schools to operate was encouraged by the decline in reported coronavirus cases in recent weeks — now at less than one-fifth the peak it registered in April.

Sinop, a city of 143,000, was the first city in the country to resume private-school classes, last month, according to Fenep. Weeks later, its schools were shut down as infections spiked.

"I think we are certainly not — and especially not Duque de Caxias — in a curve where they could reopen the schools,″ Lago said.

The city "has no health system, it's very fragile. It doesn't have the conditions to assume all health demands.″