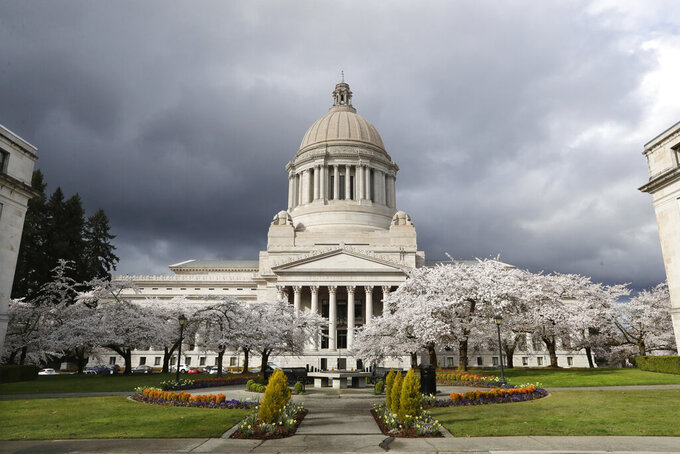 In this photo taken March 23, 2020, cherry trees bloom next to the Capitol building in Olympia, Wash. Even once Washington's economy fully reopens following the coronavirus outbreak, the effect on state revenues is expected to be felt for months and maybe years to come, leading state officials to start preparing for inevitable budget cuts now. (AP Photo/Elaine Thompson)

OLYMPIA, Wash. (AP) — Even once Washington’s economy fully reopens, the effect on state revenues from the coronavirus shutdown is expected to be felt for months and maybe years to come.

State officials are preparing now for the inevitable budget cuts. Last week, state agency directors, statewide elected officials and presidents of colleges and universities received a letter from David Schumacher, the head of the Office of Financial Management, asking them to immediately identify areas in their budgets where savings could be found, including delaying the hiring of employees and reducing or delaying the implementation of programs.

“While it is not possible to project the full impact of the coronavirus response on our economy, we know the fiscal fallout from the economic downturn will be significant,” Schumacher wrote.

In February, lawmakers received good news with their quarterly revenue forecast that showed state revenues looked to increase by about $606 million in the current two-year budget cycle that ends mid-2021, and an additional $536 million for the next two-year budget that ends mid-2023, pushing projected revenues for that budget cycle to $55.7 billion.

Two months later, with a stay-at-home order in place and non-essential businesses closed, that positive forecast has been turned upside down. Now, Schumacher says a reduction of $5 billion in projected state revenues over the next three years “would be very optimistic thinking.”

He noted if the reduction in state revenues was closer to what was seen in the state recession — which saw projected revenues decline by about $10 billion over four years through the end of 2011 — the state would quickly burn through the more than $3 billion in total projected reserves and would have to hope for additional federal stimulus money to the states to help blunt the impact.

Earlier this month, Gov. Jay Inslee vetoed hundreds of millions of dollars of spending in hopes of making a dent in the loss of state revenues as the COVID-19 pandemic continues to keep the state’s economy largely shut down.

Even with those vetoes, and with Schumacher’s letter asking agencies to find areas to cut costs, Inslee has said the Legislature will probably have to be called back into a special session before their next regularly scheduled session begins next January.

The last bill lawmakers passed before they adjourned their 60-day supplemental budget session March 12 was a measure drawing $200 million from the state’s emergency “rainy day” fund, with $175 million going to the public health system and the remainder to a dedicated unemployment fund.

To date, $140 million of that allocation has been spent and the state is seeing record numbers of people applying for unemployment benefits. As of last week, there were more than 605,000 claims for unemployment benefits filed and more than $1.4 billion in benefits have been paid out as of this week. State officials said Thursday they are preparing for up to 1 million claims to be filed by Sunday.

“All of this is devastating. The loss of human life, the illness the damage to our economy and to people’s livelihoods. It’s all devastating,” said Democratic House Speaker Laurie Jinkins. “And it’s devastating to go from where we were to where we are now.”

Jinkins said there is no question in her mind that lawmakers will convene before January — the question is when, and how to safely do so. Staff in both the Senate and House have been in the process of reviewing options for a remote special session.

Sen. Christine Rolfes, a Democrat who is the chief budget writer in the Senate, said once lawmakers get preliminary economic forecast numbers at the end of the month, they may have a better sense of things, but they may not have all of the information they need until the next revenue forecast that is scheduled for June 17.

“You don’t want to have a special session without enough information to know what your goals will be,” she said.

Rolfes said that Inslee’s vetoes and Schumacher’s letter to the agencies “will help buy us some time.”

“Nobody in the Legislature or state government has governed through a pandemic so we’re writing the rules as we go along,” she said.

Sen. John Braun, the ranking Republican member of the Senate Ways and Means Committee, said that he’s pushed to get more people back to work with the needed protocols to address concerns about the virus because he fears the longer the economy is shut down, the more likely programs that help the most vulnerable are at risk of seeing cuts when the Legislature prepares a new two-year budget next year.

Schumacher said with about three-fourths of the budget unable to be cut — areas that are legally or constitutionally protected, like basic education and Medicaid — that means cuts to social programs and higher education are on the table.

“There’s nothing good that’s going to happen budget-wise from here on in,” Schumacher said. “The only question is can we mitigate it so that we can make sure people aren’t devastated by these cuts.”