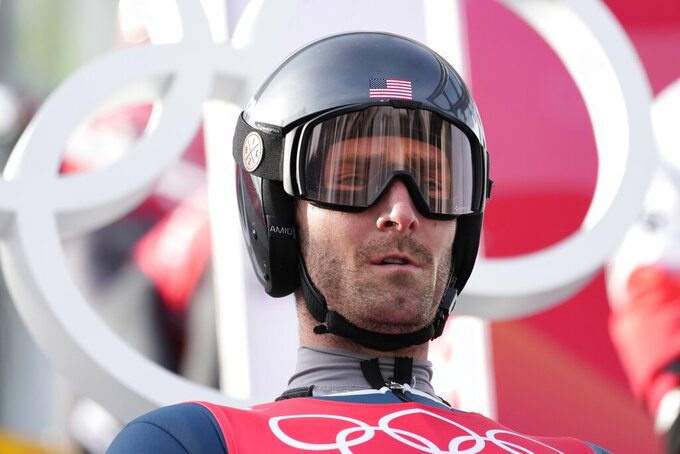 Taylor Fletcher, of the United States, prepares for his jump during a ski jumping training session in the Gundersen normal hill Nordic Combined event at the 2022 Winter Olympics, Monday, Feb. 7, 2022, in Zhangjiakou, China. (AP Photo/Andrew Medichini)

ZHANGJIAKOU, China (AP) — Taylor Fletcher almost ended his Nordic combined career shortly after his third trip to the Olympics in 2018.

Fletcher's father died of Lou Gehrig’s disease, his stepfather had a near-death experience in a bike accident and he broke up with a longtime girlfriend.

“It was a very difficult time for me," he recalled in an interview with The Associated Press. “I was thinking about retiring."

Fletcher, though, bounced back mentally and kept himself physically in condition to earn another appearance on the world's stage at the Beijing Games.

“Knowing that this is most likely going to be my last Olympics, it's crazy to look back on the journey I've had from the first Olympics in 2010 in Vancouver up until now," the 31-year-old said Monday after a training session. “Everything’s kind of felt like it’s come full circle. When I became part of that team in 2010, I was the youngest. Now 12 years later, I’m the oldest guy on the team and this is my fourth appearance.

“Super thankful for pretty much everybody that has supported me along the way for my Olympic journey, and ready to give it my best."

Fletcher said one of those people is sports psychologist Nicole Detling, who has helped him with his mental health. He also has found ways to find peace in solitude.

“I’ll lean on meditation," he said. “It’s a huge part for me. It’s something I do three, four, five times a week pre-competition to quiet down my mind. I’ve been working with a sports psychologist, who has been helping me work through issues in personal life."

When the first of three Nordic combined medal events begin Wednesday on the normal hill, Fletcher's potential path to the podium has been cleared a little. Four of the top seven athletes, including second-ranked Jarl Magnus Riiber of Norway, recently tested positive for COVID-19.

“Those top guys are strong, strong jumpers,” Fletcher said. “Riiber has been one of the top jumpers. As much as we wish they were in the competition, we’ve done our due diligence and taken every precaution to make sure that hasn’t happened."

Riiber and the other three Nordic combined stars may be able to participate on the large hill on Feb. 15 and in the team competition on Feb. 17.

Nordic combined, which has been part of the Winter Olympics since the first one in 1924, is popular in Europe and a foreign concept for most Americans. It is also the only Olympic sport without gender equity as women have been shut out so far.

The first phase of the competition is ski jumping. The athlete who jumps the farthest and impresses the judges the most style to earn the most points starts the 10K cross-country race with a lead.

The rest of the pack follows, in order of the finish in ski jumping.

Fletcher is No. 41 in World Cup rankings in a sport that increasingly has become filled with excellent ski jumpers, which is not his forte. Cross-country skiing, though, is a strength. At the previous three Olympics, he placed as high as 20th.

“Taylor is an animal when it comes to cross-country skiing," American teammate Jasper Good said. “He’s one of the fastest in the world.”

Fletcher's former teammate, Billy Demong, also was excellent on skis and that allowed him to go from sixth place and 46 seconds back to first to win gold at the 2010 Olympics.

“I’m proud to have been multiple things at different times in Taylor Fletcher’s career," Demong said. “I’ve been his mentor, his roommate and his coaches' boss. He’s touched success on many occasions and on the eve of one of his final Olympic appearances, he has a solid chance to accomplish something which seemed unattainable just a few months ago — to medal in an individual event.

“He has done all the hard work. He’s in top form both on the ski jump and, of course, the cross-country course. And with the craziness of COVID, he is well positioned to show the world what he is made of."