Florida: coronavirus hospitalizations down, deaths up 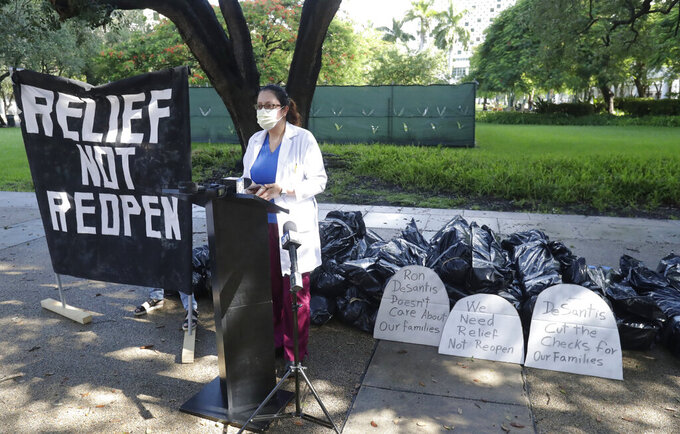 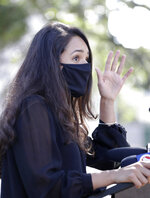 ST. PETERSBURG, Fla. (AP) — During a Tuesday round table at a nursing home in Jacksonville, Gov. Ron DeSantis returned to a familiar theme: protecting the state’s most vulnerable from the coronavirus.

The governor said he was looking for “a pathway to get families access” to the 1.5 million loved ones who are finding themselves socially and emotionally isolated in nursing homes and senior facilities.

“Four and a half months are a long, long time,” the governor said.

Though Florida has managed to bring down the proportion of pandemic deaths stemming from nursing homes by keeping them on lockdown and other measures since March, infections have been surging in those facilities alongside community spread throughout the state this summer. The number of residents of long-term care facilities in the state testing positive for COVID-19 was around 5,800 as of Tuesday, roughly double that of early July.

DeSantis stressed the need for those living in facilities to have contact with families, and lauded a Jacksonville woman who took a job as a dishwasher at a nursing home so she could have contact with her husband, an early-onset Alzheimer’s disease patient who lives in the home.

Nursing home staff statewide are required to be tested every two weeks, and the governor seemed to suggest that he would be open to reopening nursing homes for family visits with greater availability of rapid testing that can provide test results within minutes.

But the governor also seemed to suggest that there was a more immediate urgency to reopening facilities.

“Testing is obviously important,” he said. “Do not only fixate on testing. You’ve got to think of other ways.”

“Look, I’m comfortable with the PPE,” the governor said, referring to personal protection equipment like face masks. “Hell, hug ’em. I mean come on. If you have PPE on, and you hug and you don’t sneeze or don’t do something on ’em, you’re going to be fine.”

The state has purchased about 1,400 animatronic pets to help give comfort to seniors residing at such facilities.

“It’s very calming when you sort of hand these pets over, which look and feel like a real pet. You actually feel a heartbeat, and they meow and they bark,” said Richard Prudom, the Secretary for the Florida Department of Elder Affairs.

Another institutional setting is also a concern for health officials: jails and prisons. Some facilities have stopped accepting new prisoners in hopes to avoid further overcrowding and to manage the spread of the virus raging inside.

Miami Dade Corrections spokesman Juan Diasgranados said Tuesday that Jairo Bravo, a 48-year-old corrections officer, died Saturday from Covid. Officials say there are 238 Miami-Dade correctional employees who are positive and at home in isolation, and 243 in-custody inmates who tested positive and in isolation.

On Florida’s Panhandle, a man who worked for 25 years at Jackson Correctional Institution in Malone, died of Covid an hour after his wife. Wayne Rogers, 65, and Lauri Rogers, 61, died Friday. They lived in nearby Rehobeth, Alabama.

At least two other correctional officers in Florida have died from the virus.

Florida’s tally of deaths from the new coronavirus surged Tuesday while hospitalizations for the disease declined for the second week in a row, according to information released by the state.

Florida reported 245 new deaths Tuesday, bringing its seven-day average in daily reported deaths to 184 — its highest rate yet and just behind Texas for the past week with 186. They compare with more than 760 in average daily deaths for New York at its peak in mid-April.

The number of people being treated for COVID-19 in hospitals statewide continued a nearly two-week downward trajectory, with 7,797 patients in the late morning Tuesday, from 7,991 the day before and down from highs of more than 9,500 about two weeks ago, said the DOH.

Also, for the 10th day in a row, there were fewer than 10,000 newly recorded cases, with only 5,446 positive results reported in a 24-hour period. Whether these numbers reflect a sustained downward trend won’t be clear until fresh results are reported, because many large testing sites were closed over the weekend and into Monday due to Tropical Storm Isaias. Those sites have since reopened.