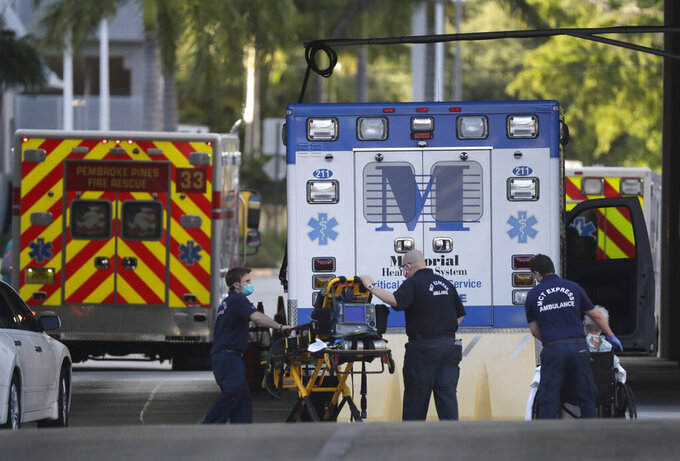 Crews return to their ambulances, Tuesday, May 12, 2020, at Memorial Regional Hospital in Hollywood, Fla. Emergency room visits have dropped by almost 50% across Florida since the coronavirus pandemic began as hospital officials on Tuesday warned that patients suffering from heart attacks and strokes are delaying or refusing care because they are afraid of going to the hospital. (AP Photo/Wilfredo Lee)

FORT LAUDERDALE, Fla. (AP) — Emergency room visits have dropped by almost 50% across Florida since the coronavirus pandemic began as hospital officials on Tuesday warned that patients suffering from heart attacks and strokes are delaying or refusing care because they are afraid of going to the hospital.

An 80-year-old Florida man last week decided not to call 911 after falling and breaking his hip, afraid that if he went to a hospital he would contract the coronavirus.

Instead, the Fort Lauderdale family waited and within a few days the man had developed a high fever and a serious urinary tract infection that eventually turned into sepsis. They finally called an ambulance, but doctors say he could have avoided such complications entirely.

In Broward County, the state's early epicenter for the novel coronavirus, nearly twice as many people were already dead by the time first responders arrived in April, compared to a year earlier.

Calls to 911 are also down and Fort Lauderdale paramedics transported about 1,000 fewer patients to the emergency room in April compared to the same month in 2019.

Broward Health has seen a 30% decrease in the number of stroke victims coming into the ER so far in 2020 compared to last year and a 50% decrease for heart attack patients, said Chief Medical Officer Dr. Joshua Lenchus.

“People are waiting to come to the hospital until it’s too late and then they die,” he said.

The stats are similarly grim around the state.

First responders in the city of Miami transported 35% fewer suspected stroke patient in March compared to April, according to Jackson Memorial Hospital.

Dr. Josef Thundiyil, an ER physician at Orlando Health, said some heart attack victims are waiting hours or even an entire day before getting help. Some stroke victims wait so long that the damage is irreversible, he said.

People with minor infections that could normally be treated with oral antibiotics are instead waiting to get help, thereby allowing the infection to get into their bloodstream and become life-threatening, he said.

“Sometimes, they let these conditions get out of control so when they do come in they are extremely, extremely sick," he said.

Hospitals stressed they are taking massive precautions to prevent the spread of the disease. That includes turning nurses into dedicated ER safety monitors who hawkishly patrol the floor to make sure doctors, patients and paramedics coming in and out are wearing masks, gloves, and gowns and following decontamination protocol.

Rapid response testing alerts most hospitals within the hour whether a patient has COVID-19 so they can be separated from other patients. Many hospitals are using negative airflow rooms for virus patients so they aren't breathing the same air.

“The fear issue is understandable, but I think what people don’t realize is that hospitals like ours have gone out of our way to prepare for this,” said Dr. Josef Thundiyil.

But experts worry that despite stepped-up safety measures, the fear will be difficult to overcome.

Allen Weiss, former CEO of Naples Community Health, said it's time to educate people that hospitals are safe while also encouraging them to use telehealth and other options for less serious ailments.

“Unfortunately, we’re starting to get to a point where when we are getting to the house, there’s no opportunity to save that life,” said Stephen Gollan, Battalion Chief for Fort Lauderdale Fire Rescue, who noted his crew had responded to four DOAs in the past 24 hours. “That has a tremendous toll on our paramedics.”

This story has been corrected to show the name of the former CEO of Naples Community Health is Allen Weiss.