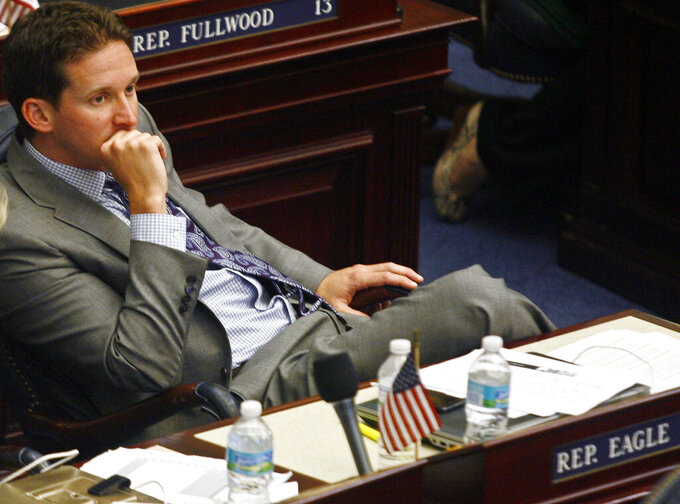 FILE - In this April 24, 2014, file photo, Rep. Dane Eagle, R-Cape Coral, listens to a debate on the floor of the House of Representatives, in Tallahassee, Fla. Gov. Ron DeSantis announced Wednesday, Sept. 2, 2020, that he has appointed Eagle as the new executive director of the Florida Department of Economic Opportunity. (AP Photo/Steve Cannon, File)

TALLAHASSEE, Fla. (AP) — State Rep. Dane Eagle was appointed as executive director of the state's employment agency on Wednesday, a little more than two weeks after barely losing a Republican primary for Congress in a heavily GOP district.

The agency was widely criticized for long delays in paying out unemployment benefits after the economy tanked during the coronavirus pandemic. Hundreds of thousands of people waited weeks — and sometimes months — for benefits from the glitch-ridden unemployment system after suddenly losing work amid the outbreak.

Eagle, 37, is a real estate broker who has served in the state House since 2012. He is the House majority leader and the vice-chair of the powerful Appropriations Committee.

“Leader Eagle is an experienced legislator, a family man, and the right choice to lead DEO,” DeSantis said in a news release. “The Department has suffered some setbacks, but I have no doubt that Dane is up to the task. He is personable, enjoys broad bipartisan support, and I look forward to the many successes to come."

Eagle was a deputy chief of staff for then-Republican Gov. Charlie Crist and helped raise money for Crist’s 2010 Senate run. But Crist dropped out of the Republican primary, ran as an independent and lost to Republican U.S. Sen. Marco Rubio. Eagle parted ways with Crist, who is now a Democratic congressman.

DeSantis yanked Lawson from his oversight role on unemployment in April. Lawson remained as director of the Department of Economic Opportunity, but management of the unemployment system was given to Department of Management Services Secretary Jonathan Satter.

DeSantis has referred to the unemployment filing system as a clunker and a jalopy. In May, DeSantis ordered the state inspector general to investigate the contract awarded to DeLoitte to build the system in 2011, when now Republican Sen. Rick Scott was governor. The contract was originally worth $40 million, but the cost ballooned to nearly $78 million after 14 contract amendments.

Many people seeking claims had to wait weeks or months to receive benefits as the state’s unemployment rate shot upward when non-essential businesses were shut to try to stop the spread of coronavirus.

Eagle ran for the seat being vacated by Republican U.S. Rep. Francis Rooney, losing the Aug. 18 primary by 777 votes to state Rep. Byron Donalds in a nine-way race.