Florida QB Trask ready to take 'next jump' in progression 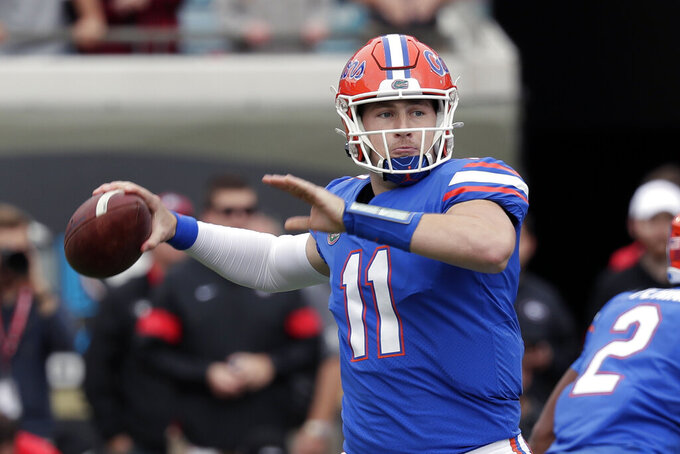 FILE -In this Nov. 2, 2019, file photo, Florida quarterback Kyle Trask throws a pass against Georgia during the first half of an NCAA college football game in Jacksonville, Fla. Isolated from coaches, teammates and friends during the coronavirus pandemic, Kyle Trask found plenty of extra free time this offseason. He reviewed each of his performances from his breakout year, trying to find and fix every flaw in hopes of improving the eighth-ranked Gators’ chances of becoming Southeastern Conference and national championship contenders in 2020. (AP Photo/John Raoux, File)

So the Florida quarterback did what millions of others would have done in his situation: He binged.

Trask turned on his tablet and watched a season’s worth of football. Not just random games, though. Trask reviewed each of his performances from his breakout year, trying to find and fix every flaw in hopes of improving the eighth-ranked Gators’ chances of becoming Southeastern Conference and national championship contenders in 2020.

“Just trying to nitpick myself,” Trask said. “I knew this was an opportunity for me to really take that next jump in my game, individually.”

Trask studied pre-snap reads, footwork, progressions, accuracy — anything and everything possible to make himself more polished in the pocket.

It could be the kind of nuanced approach Florida needed to take another step forward in coach Dan Mullen’s third year in Gainesville. The Gators won 10 games in 2018 and 11 last season. What’s next? Winning the SEC’s East Division, for starters.

And although Florida might have its most QB depth in more than a decade — sophomore Emory Jones appears to be a viable starter and highly touted freshman Anthony Richardson is joining the mix — Florida’s success surely starts with Trask.

“I think he has taken it to another level, and it’s just him running everything,” tight end Kyle Pitts said. “Him being the guy that’s the first to meetings and first to call things up, make sure the offense is right and just making sure that everything around him is correct.”

Trask could end up near the top of that list if he continues to develop at his current pace.

The Houston native was thrust onto the field last September when Franks broke his right ankle in the third quarter at Kentucky. Trask rallied the Gators to a 29-21 victory and then became a starter for the first time since his freshman year in high school.

Trask accounted for 29 touchdowns — the most at Florida since Tebow in 2008 — and threw just seven interceptions. His 156.09 passer rating in 2019 ranked ninth in school history and was the program’s highest since Tebow’s nation-leading 164.2 in 2009.

Not surprisingly given his long wait, Trask wants more. Shortly after spring practice was shut down, he settled in and broke down nearly 40 hours of game video. He found plenty to work on, including his body.

The 6-foot-5, 240-pound graduate student dropped close to 15 pounds by changing his diet and upping his exercise. He insists he’s quicker on his feet.

“Kyle’s done a tremendous job so far just in terms of taking everything to the next level,” Florida quarterbacks coach Brian Johnson said. “He’s looking lean.”

Trask arrived home in Houston for the offseason with a to-do list for individual work and turned to an old friend to help. He practiced with fellow quarterback and high school teammate D’Eriq King, who transferred from Houston to Miami in January and will start for the Hurricanes.

“I think it was huge for both of our games,” Trask said. “It was an opportunity for us to stay competitive and always try to still one up each other through these little drills that we were doing. It was pretty cool.”

Trask returned to campus this summer feeling like he figured some things out.

“In the quarterback position, experience is a huge thing, so just to have that, almost that whole season under my belt going into this 2020 season, I feel obviously a lot more confident about this year than I did last year,” he said.

Mullen seems to have the same sentiment, allowing Trask to have input on game plans and the ability to change plays at the line of scrimmage. The Gators open the season Sept. 26 at Ole Miss.

“I think he has really improved the speed of how he decides things and just, obviously, which is a big one, his knowledge of the game,” Mullen said.

Now Mullen and the Gators hope all that binging translates into a title.