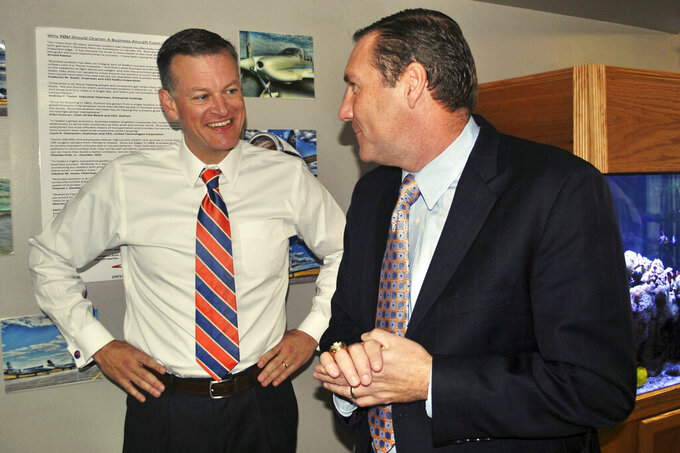 FILE - In this Nov. 27, 2017, file photo, University of Florida athletic director Scott Stricklin, left, smiles as he talks to Florida's new NCAA college football coach Dan Mullen after Mullen arrived at the airport in Gainesville, Fla. Florida’s athletic department had a $54.5 million shortfall during the 2020-21 fiscal year because of the coronavirus pandemic, significant financial losses the Gators were able to weather with a supplement from the Southeastern Conference and a sizeable reserve. (AP Photo/Mark Long, File)

GAINESVILLE, Fla. (AP) — Florida’s athletic department had a $54.5 million shortfall during the 2020-21 fiscal year because of the coronavirus pandemic, significant financial losses the Gators were able to weather with a supplement from the Southeastern Conference and a sizeable reserve.

The University Athletic Association released its annual budget summary amid the school’s two-day board of trustees meeting that ended Friday, and athletic director Scott Stricklin expressed optimism that one of the country’s most successful sports programs would rebound without any long-term setbacks.

“It’s something we hope we never have to do again,” Stricklin said. “Glad it’s behind us. Looking forward to normality.”

Stricklin said there was a sense of “organizational pride” that Florida didn’t have any layoffs, furloughs or salary cutbacks during the pandemic. The Gators did stop pension payments for a year and eliminated bonuses for everyone on their payroll, including coaches.

They saved money by reducing operating costs, some because of canceled sporting events last spring and others because of changes in recruiting and other travel policies.

The SEC responded by giving its 14 member institutions $23 million each to help offset the losses. The league plans to use future conference revenues from an increased television rights contract to pay for the one-time supplement.

The SEC said its schools averaged roughly $45 million in shortfalls, with losses ranging from $17 million to $85 million. Florida was on the higher side because it chose not to take some of the more drastic measures like layoffs and furloughs,

“That supplement helps, but it didn’t solve it all,” Stricklin said, adding that Florida dipped into its $51 million reserve to cover the rest.

“What the SEC money is going to do is allow us to replenish that (reserve) to a degree,” Stricklin added.

The pandemic delayed progress on Florida’s $85 million football standalone, which is now scheduled to be completed next May. It’s the latest in a series of facility upgrades on campus. The Gators have spent nearly $280 million over the last six years on capital improvements affecting academics, football, basketball, baseball, softball, soccer and lacrosse.

“We have a really strong balance sheet and we’re really strong financially, and if we didn’t have those things, we would not have been able to kind of move forward with some projects,” Stricklin said.

The 142,000-square-foot football standalone and a $7.4 million renovation to the school’s soccer/lacrosse facility are the final pieces of a three-phase “master plan.” After that, the Gators will turn their attention to Florida Field, which hasn’t seen a major remodel since 2007.

The aging stadium is long overdue for upgrades that are likely to include adding chairback seats and shade structures — and could top $200 million.

“We’re going to have to be creative to spend the kind of money we need to spend there,” Stricklin said.

Florida’s operational budget for 2021-22 is $143.8 million, and the school is expecting a return to normal revenue since attendance restrictions have been lifted.

Stricklin praised the school’s medical staff for helping navigate all the unknowns that followed the coronavirus shutdown in March 2020 and was most proud of “the constant communication piece” that involved staff, student-athletes, parents and fans.

Stricklin went months without watching the Gators compete and more than a year before experiencing a full sporting venue.

“That pit in your stomach that you get, that’s what makes it great,” he said. “The fact that there’s competition and we’re going up against somebody, the drama and the friction that creates is why we’re in athletics.

“We just didn’t have it and you didn’t realize how much you missed that until it was May and nobody was competing.”