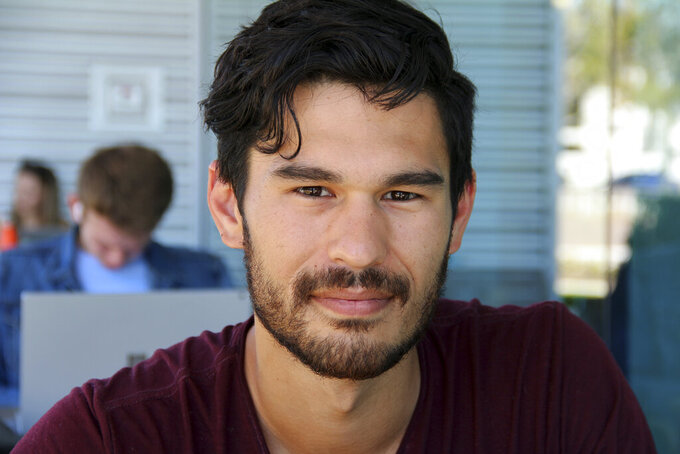 This photo provided by Meleah Lyden/Fresh Take Florida shows University of Florida student London "Don" Balcita at Opus Coffee on Thursday, March 11, 2021 in Gainesville, Fla. When the coronavirus pandemic hit Florida a year ago, colleges and universities shut down in the middle of the semester. Students were left to navigate their coursework online. Some, like London “Don" Balcita, say they were lost for a while. (Meleah Lyden/Fresh Take Florida via AP)

GAINESVILLE, Fla. (AP) — A year ago, London “Don” Balcita was a student at Santa Fe College aspiring to attend the University of Florida. His computer was stolen, but he was navigating his coursework using resources on campus.

Then the pandemic hit with full force, shutting down college campuses across Florida and the U.S. Balcita, a 26-year-old veteran, finished his final transfer requirements the best way he could: He wrote two college essays using the tiny keyboard on his phone.

For every American generation, there is a singular, historic event that marks its identity, its echoes reverberating for decades. Where were you when it happened? Pearl Harbor. John F. Kennedy. The Challenger explosion. 9/11. Now, the pandemic.

For America’s college students, the virus changed their lives in ways big and small.

“It was a nightmare,” Balcita said. ”I was an emotional wreck.”

Since the pandemic, the United States has reported almost 30 million cases of COVID-19, and more than 500,000 deaths. In Florida, the numbers are staggering: 1.9 million cases, and almost 32,000 deaths, so far — with the University of Florida reporting more cases than any other university in the country.

In Florida, vaccines bring an end in sight for some groups — college students not included.

Gov. Ron DeSantis opened up the vaccine to health care workers with direct patient contact, long-term care facility residents and staff, anyone 65 years or older, any sworn law enforcement, firefighters or K-12 teachers 50 or older, and anyone deemed “extremely vulnerable.” President Joe Biden announced Thursday that he plans to make every adult eligible for the vaccine by May 1.

One year ago, the State University System of Florida began a two-week period of remote learning to curb the spread of COVID-19. Within a week, Gov. DeSantis announced that four students at the University of Florida had tested positive for coronavirus, and recommended to the state’s Board of Governors that state universities continue remote learning through the remainder of the semester.

Universities remained online through the summer, with slow integration back into a classroom setting during the fall and spring semesters. Across the country, college-aged students have struggled with the transition from in-person learning to what has been referred to as “Zoom University.”

For Balcita, online classes are difficult. It’s not the way he enjoys learning. Class discussions are challenging. He likes to ask questions and not fade into the background over Zoom, even though online classes provide more flexibility, he said.

At Florida State, freshman Anastasia Salatino said online learning makes it hard to stay motivated and learn the material. It’s difficult to stay awake and it’s typical to leave the work until the last minute. It only gets done because it has to, said Salatino, 19, of Floral City in Citrus County.

Salatino struggles with even the simplest tasks.

It’s made adjusting to college life more difficult – especially when she’s cooped up in a dorm room.

“I do have some online friends,” she said. “And they’re like the best thing ever. I really don’t know what the heck I would be doing without them.”

She sends private messages to peers during Zoom classes when someone says something funny, or connects with groups online. She lives day by day.

“It feels really crappy,” Balcita agreed. “There’s no definitive culture or support group I can identify with because it’s so hard to connect with people.”

He just tries to power through any bad feelings and feels lucky he already had friends attending Florida before he transferred.

In South Florida, Kira Quintana wasn’t worried when the University of Miami extended spring break by a week. For her, it was extra time to study for an upcoming exam.

When her campus closed, she got nervous. Quintana, 21, lives at home with her parents and brother in Miami. That made her more conscious about the health risks.

“I definitely went from ‘OK, a little extra study time,’ to like, ‘Oh man, we’re in something deep.’”

She is grateful for the time with her family. “I do more activities with my family that I wasn’t doing as much of,” she said. “When I look back, that’s one of the silver linings.”

Being isolated from her friends was difficult.

“I don’t have as many friends on campus or just in general as I did at the beginning,” she said. “Sometimes people are your friends because you see them in class every day. It’s harder when they are just a small box on a screen.”

The state also closed public schools in April after cases of the virus started to rise. This meant remote learning the rest of the school year, and canceled proms and graduations.

Julia Guerrero, 18, watched her high school graduation from her couch. She missed out on the traditions of taking photos and surrounding herself with family and friends.

“It didn’t diminish our accomplishment,” she said. “It is just a new way of living and something we had to accept.”

She finished her senior year of high school online, then left West Palm Beach to move to Gainesville to begin her college career. She admits feeling fearful living in a dorm during the pandemic. Most of the University of Florida’s cases were spread in dorms, or fraternities or sororities.

For Guerrero, despite the end of high school being online, she said she still struggles with virtual learning and the lack of physical interaction with professors and classmates.

“I haven’t seen the inside of a lecture hall yet,” she said, “and it’s almost the end of my freshman year.”