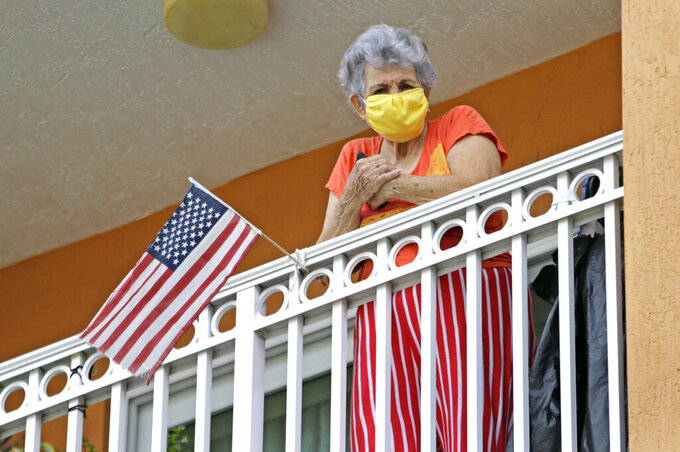 A resident from Daisy & Rosa Gardens housing buildings looks from her balcony before the City of Hialeah distribute of protective mask to the senior citizen residents as the Novel Coronavirus pandemic continues on Thursday, April 16, 2020 in Hialeah. The City of Hialeah will be distributing over 3,000 3-Ply Face Masks to Senior Housing.(David Santiago/Miami Herald via AP)

TALLAHASSEE, Fla. (AP) — As one of Florida's tourist meccas, the city of Miami Beach is usually bustling, its restaurants and bars overflowing and its streets pulsing with traffic. Out-of-town money kept the city's coffers brimming — until the city budget began bleeding millions of dollars because of the coronavirus pandemic.

Earlier this month, the city furloughed dozens of its workers and put in place a hiring freeze. Its mayor says the city is losing about $3.5 million a week because of lost revenue from empty hotels, idled restaurants and bars, and its shuttered world-famous shoreline.

“We are a city that has a diverse tax base, but it also includes resort taxes. Because we are such a hospitality center, we're going to see a dip in our revenues," said Miami Beach Mayor Dan Gelber. “As we navigate the health care crisis, we also want to be sure we were able to navigate through the financial pressures.”

Even as Florida starts to ease stay-at-home orders and begins lifting restrictions on restaurants and other hard-hit businesses, public sector workers are fretting over job losses that could arrive in the weeks and months to come because of the economic downturn.

On Thursday, the U.S. Department of Labor said 432,000 Floridians filed new unemployment claims -- the most of any state last week.

“Over the next six to eight months is when we are very fearful, that as budgets are being recalibrated, that it's going to affect our full-time employees," said Jacqui Carmona, the political director of the American Federation of State, County & Municipal Employees of Florida, the state's largest public workers union.

The 95,000-member union is bracing for additional staff reductions as cities, counties and the state government reassess spending because the state’s once-robust economy isn’t pumping in as much tax revenues.

Florida's budget situation remains uncertain as state officials try to get a firmer grasp on state revenues, which relies heavily on tourist dollars and its other revenue-generating economic engines to pay for salaries and state services.

During the just-completed legislative session, lawmakers set aside an additional $300 million to help the state weather the economic tumult. Whether that amount will be sufficient is up for debate — possibly in a special session, if one is necessary to address the financial upheaval.

Gov. Ron DeSantis has yet to receive the state's $93.2 billion budget document, which boosts the starting salary for new teachers and gives 3% across-the-board raises for most state workers.

Union officials hope the governor won't renege on those raises.

To help keep public workers in their jobs — including sanitary workers, road crews and clerks at government offices — unions have called on the federal government to help bail out local governments reeling financially from the outbreak.

Miami-Dade County expects to lose about $300 million over the next year because of the pandemic.

In Duvall County, about 680 school custodians found out late last week that their services were no longer needed because schools remain closed. In addition, 700 food service workers are now also seeking unemployment benefits.

Cynthia Hall, a cafeteria manager at a Jacksonville school, said she learned she was out of a job while watching the television news. She’s been out of work since mid-March, when schools across the state began closing. She works for a company that provides cafeteria services across Duvall County.

Hall said her landlord has been understanding about her late rent. She’s also behind on other bills as she waits for her unemployment checks to arrive.

“It’s been so depressing waiting on the mailman,” she said. “I’ve been without money, and I don’t know which way to go.”

The AFSCME said 25 of its members in Sanibel, a community of 7,400 in southwest Florida, lost their jobs.

In Miami Beach, about 250 of the city's 2,200 workers were furloughed earlier this month, the vast majority of them part-time employees. Some park workers may soon be called back, however, because of the governor's decision to lift restrictions on some public activities.