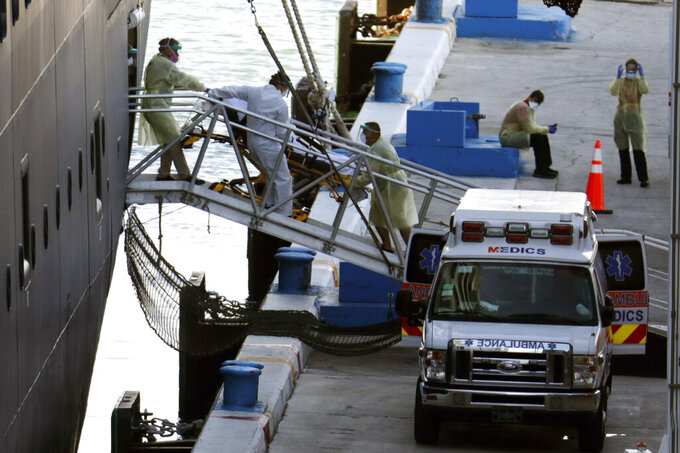 FILE - In this April 2, 2020, file photo, a person on a stretcher is removed from Carnival's Holland America cruise ship Zaandam at Port Everglades during the new coronavirus pandemic in Fort Lauderdale, Fla. Several major cruise lines have canceled trips until the first quarter of 2021. (AP Photo/Lynne Sladky, File) 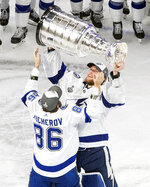 FORT LAUDERDALE, Fla. (AP) — No one knows how the coronavirus arrived in Florida as 2020 dawned. Maybe a Super Bowl visitor brought it before the Kansas City Chiefs defeated the San Francisco 49ers in early February. Maybe a business traveler returning from Asia, Seattle or New York or a cruise passenger was infected.

What is known is like the rest of the planet, the pandemic dominated Florida headlines in 2020 — more than 21,100 residents have died from COVID-19, tens of thousands have been hospitalized and more than a million caught it.

The virus cratered the state's economy. Unemployment is at 6.4%, up from 2.9% a year ago — it peaked at 14.5% in May. At one point, more than a million Floridians needed unemployment assistance — a crisis made worse when the state's computer system for seeking benefits crashed under the strain.

Because of the pandemic, Jacksonville was awarded much of the Republican National Convention when Charlotte, North Carolina, imposed attendance restrictions. But shortly before the convention opened, a July spike canceled it.

Of course, the virus wasn't the only major Florida story in 2020. President Donald Trump carried his adopted home state, defeating President-elect Joe Biden by 3 percentage points, defying predictions that Florida's race would be a nail-biter.

November's election had only minor problems even with the pandemic, perhaps burying the state's reputation for voting ineptitude forever. Voters overwhelmingly increased the minimum wage. Still, thousands of released felons who thought a 2018 ballot measure had restored their voting rights were told by courts they first must pay all fines and fees.

Like much of the country, protests erupted after George Floyd's May death while being arrested by Minneapolis police, but most were peaceful.

And some uniquely Florida stories made headlines. Prosecutors dropped misdemeanor solicitation of prostitution charges against New England Patriots owner Robert Kraft after courts barred videos of him allegedly paying for massage parlor sex. A Connecticut opera singer drew gunfire from Secret Service agents and others outside the president's Mar-a-Lago home when she sped an SUV through a checkpoint.

By mid-March, the state's theme parks and schools closed. DeSantis ordered bars shut down and that restaurants switch to take-out only. He imposed quarantines on visitors from the New York City area and Louisiana. Counties issued stay-home orders — DeSantis said that was his preference as what cities required wasn't necessary in rural areas.

But on April 1, with 130 Floridians dead and 10,000 confirmed cases, DeSantis issued a 30-day stay-at-home order with exceptions for essential workers and such activities as grocery shopping. Unemployment skyrocketed, but Floridians struggled to get unemployment benefits because the state's computer system wasn't designed to handle so many applications simultaneously.

With cases declining, DeSantis loosened restrictions in early May except for hard-hit Miami-Dade, Broward and Palm Beach counties. The state had 36,000 confirmed cases.

In mid-May, restaurants reopened for indoor dining at 50% capacity. Barber shops, salons and gyms also opened with restrictions. DeSantis bragged the state had performed better than New York, New Jersey and other states and criticized the media for reporting projections that forecast a spike that had not yet appeared.

In early June, bars and movie theaters reopened in most of the state with restrictions. Universal Orlando reopened with attendance limits; Walt Disney World, Busch Gardens and SeaWorld followed.

But soon the forecast spike appeared as hospitalizations and deaths soared. By July, daily averages of 11,000 confirmed cases and 200 deaths were recorded.

Then as quickly as cases skyrocketed, they fell. By October there were 2,000 new cases per day and 40 deaths. Then a new outbreak hit — by December more than 7,500 new cases were recorded daily and nearly 100 deaths. DeSantis said there would be no further shutdowns.

Hope came in vaccines, which began rolling out in early December. The state started administering them to nursing home patients and other high-risk groups.

Polls showed Biden with a slight lead over Trump in Florida before November's election, but the president won the state easily even as he lost the national election. The biggest factor was Trump's strong showing in Miami-Dade County, usually a Democratic cornerstone.

Republicans pummeled Biden in the heavily Hispanic county, accusing him of being “socialista” or even “comunista.” The attacks persuaded many Cuban and Venezuelan Americans, who associate those labels with Fidel Castro and Hugo Chavez, the leftist leaders their families fled. Biden only won the county by seven percentage points — in 2016, Hillary Clinton beat Trump there by 30 points even as she lost the state by two points.

But voters approved by a 61% to 39% margin a measure that gradually increases the state's minimum wage from $8.56 an hour today to $15 in 2026, a move opposed by conservative and business groups.

Over all, Florida's elections had no significant glitches. A big reason: More than 9 million of the 11 million ballots were cast by mail or at early voting sites, with most processed before Election Day.

Demonstrations broke out in cities statewide after Floyd's Memorial Day death. Two police cars were burned in Miami and Fort Lauderdale suspended an officer who pushed a protester as she knelt. Skirmishes between law enforcement and demonstrators happened elsewhere, but most protests ended peacefully.

— SpaceX launched U.S. astronauts into space from American soil for the first time since 2011, with launches in May and November.

— Hurricane Sally hit the Panhandle, but the state largely was spared damage during a record Atlantic storm season.

— The Supreme Court blocked a DeSantis nominee to its bench, saying Judge Renatha Francis hadn't been a lawyer for 10 years as required by the state constitution. DeSantis replaced her with Judge Jamie Grosshans.

— And in sports, the Tampa Bay Lightning won the Stanley Cup and the Miami Heat advanced to the NBA finals.