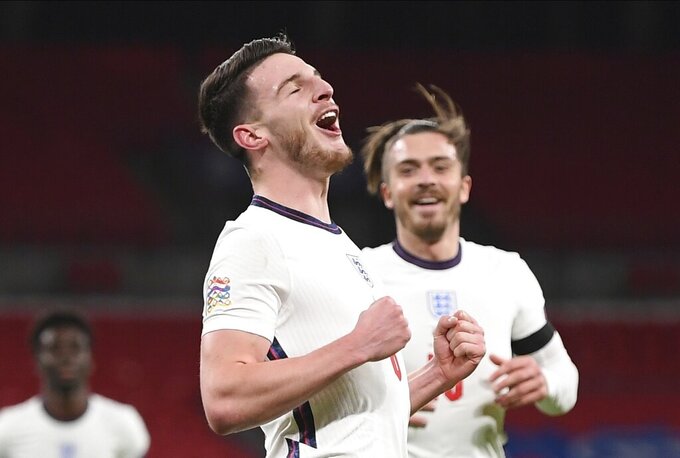 LONDON (AP) — Sent home by Gareth Southgate in disgrace three months ago, Phil Foden is back in the England manager's affections again.

The 20-year-old midfielder not only set up Declan Rice's opener but scoring his first international goals with a late second-half double as England beat Iceland 4-0 in the Nations League on Wednesday.

On only his third appearance, he became the youngest Englishman to score more than once at Wembley for his country.

It was only in September that the Manchester City player made his England debut — in the 1-0 win in Iceland in September — before he broke coronavirus regulations by meeting women from outside the team’s bubble with teammate Mason Greenwood.

Both were ordered back to England from Reykjavík to protect the health of the team, missing the 0-0 draw with Denmark. They were also dropped from the squad for October's international triple-header, with only Foden recalled for this month's final fixtures of the year for Gareth Southgate's side.

“It was one of the hardest moments of my life," Foden recalled on the Wembley field. "That’s the time you need the trust of your managers and Gareth had a lot of respect for me, to trust me to play tonight.

“I am just happy to repay him with the goals and play well. I was just determined to get back and do the best I can. I was a bit nervous at the start but I got used to it.”

With England unable to advance to the Nations League finals, hosting Iceland became a chance for Southgate to assess young talent like Foden.

“I’m really pleased for him and his family,” Southgate said. "To have the experience that he had in September is really tough for a youngster — and we all make mistakes.

"What we were intent on doing was making sure that when he came in this month, which is a difficult situation to be in, you’re walking through the door and you’re looking at everybody’s faces and you know the last time you saw them was complicated. And it took him a few days, I think, to settle into the camp and start to smile a bit more and relax a bit more.”

Foden's goals came after Iceland had been reduced to 10 men with Birkir Már Sævarsson shown a second yellow card in the 54th for tripping Bukayo Saka.

Substitute Jadon Sancho combined with Saka before setting up Foden to sweep into the net in the 80th and he fired in the fourth from outside the penalty area four minutes later.

“To get the two goals today was a glimpse for everyone of what he is capable of,” Southgate said.

After Mount headed in his first England goal in the 20th minute, fellow 21-year-old Declan Rice slid in to double the lead inside four minutes.

While Mount plays for Chelsea, Rice is across east London at West Ham.

“Before the game when we knew we were playing in midfield together, that was a special moment, and then to score in the same game was incredible," Rice said. "I know my family and his family will be bursting with pride at home.”

Attending Wembley was off-limits to even family members due to the pandemic which prevented the European Championship final being played at the London stadium as planned in July.

Attention for Southgate now turns to the rearranged Euros in 2021. It was the 2016 edition that saw England, managed by Roy Hodgson, endure one of its lowest-ever moments with a last-16 humiliation at the hands of Iceland.

This is a squad transformed under Southgate, even since he led it to the World Cup semifinals in 2018.

“We are trying to build and improve all the time," he said. "There was some lovely football. It was good to watch and for the young players to get the goals was very special for them.”

In a top-tier Nations League group won by Belgium, England finished third behind Denmark and Iceland was fourth.