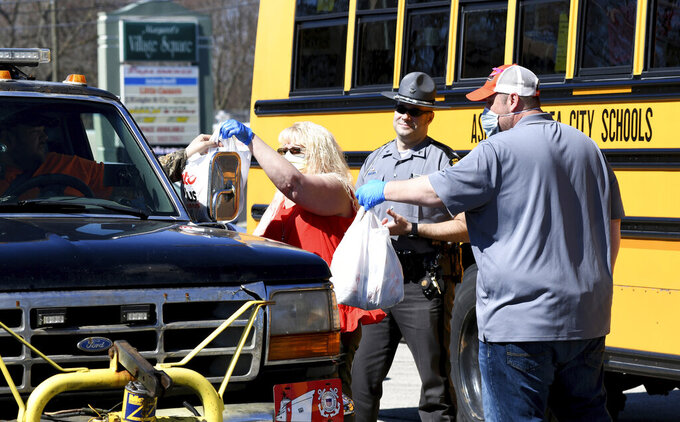 COLUMBUS, Ohio (AP) — Gov. Mike DeWine is recommending the early release of 38 prison inmates, including some who are pregnant, and the Ohio Association of Foodbanks is asking for $25 million in emergency state assistance.

A look at coronavirus-related developments in Ohio on Friday:

“If you have enough, please make sure that your family, friends and neighbors have the food that they need," Hamler-Fugitt said. "Hunger is just six doors away, and it looks a whole lot like you and me.”

Food bank operators say as many as one in three clients are new to the food bank system since the pandemic hit. DeWine promised a response soon.

Ohio Roundtable, an arm of the conservative nonprofit American Policy Roundtable, requested records from the Ohio Health Department and director Dr. Amy Acton regarding the state’s mathematical modeling of the coronavirus.

The group said Acton’s formulas are driving public policy and “creating tremendous hardships” across the state, so the math should be made transparent. Messages were left with the Health Department and governor's office seeking comment.

JobsOhio, the state’s privatized job-creation office, has made a $2 million investment in Appalachian Growth Capital LLC to be distributed to help small businesses in the state’s Appalachian region.

Ohio University said its medical school is deploying about 250 third-year students to local health agencies to assist in efforts to contain the pandemic.

The nearly 50,000 chemical substances extracted from the clearinghouse's proprietary registry of compounds are now available for download by scientists and other researchers.

In a series of letters to judges, DeWine is recommending that 23 female prison inmates who are pregnant or have a child with them behind bars, and 15 inmates over age 60 with upcoming release dates, be considered for early release.

Six inmates from a single Cuyahoga County Corrections Center housing unit in Cleveland have tested positive for the virus, and two inmates have suspected cases of COVID-19. All eight have been isolated.

More than 3,300 Ohio cases are confirmed, with 91 deaths as of Friday — with ages ranging from less than a year old to 101 — and nearly 900 people hospitalized, officials reported. That doesn't reflect all cases in Ohio, because the state limits testing to those who are hospitalized and to health care workers.

Cincinnati Children’s Hospital and Medical Center said it has employees who have tested positive for COVID-19. It didn't provide more details.

A federal judge denied a request by voting rights group to delay the state's plan to conclude an all-absentee balloting primary by April 28. “The Constitution does not require the best plan, just a lawful one,” wrote U.S. District Judge Michael Watson.

The crisis is beginning to take down summer festivals, among them southern Ohio's Washboard Fest in Logan, the Columbus Arts Festival, and western Ohio's Troy Strawberry Festival, which all were scheduled for June and announced cancellations or postponements.

Shawnee State University in Portsmouth joined numerous universities in announcing a virtual graduation, on May 9, with an in-person opportunity in December, the Portsmouth Daily Times reported.

The Ohio Department of Transportation is thanking its workers by lighting bridges in red, white and blue, including the George V. Voinovich Bridge in Cleveland, the Veterans Glass City Skyway in Toledo, and the Ashtabula Harbor Bridge. ODOT also says traffic is down nearly 60% across the state since March 29.

Most houses of worship have stopped in-person gatherings, including Roman Catholics, whose Ohio bishops this week suspended all services through May 3.

“The church is not the building,” said the Rev. Derek Terry of St. Peter’s United Church of Christ, speaking of his decision to move services online, according to WCPO-TV.