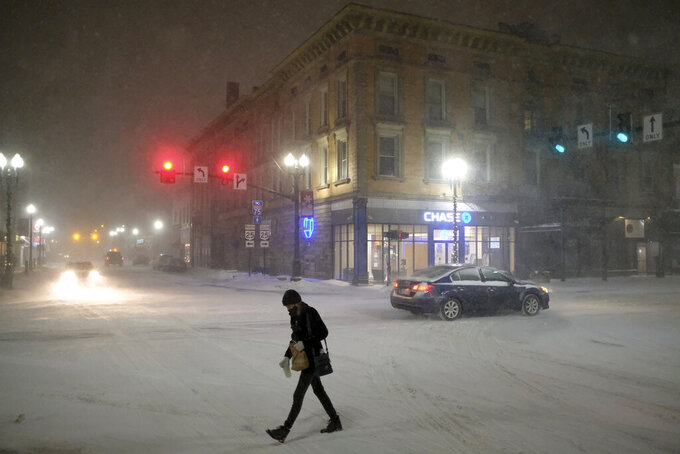 A woman crosses Wooster Street as snow falls Monday, Feb. 15, 2021, in downtown Bowling Green, Ohio. Much of the area is expected to receive a foot of snow. (J.D. Pooley/Sentinel-Tribune via AP)

TOLEDO, Ohio (AP) — Heavy snow and a coating of sleet and ice shut down several COVID-19 vaccination sites in Ohio on Tuesday along with schools and some universities. State lawmakers stayed home too.

The huge winter storm that walloped the South and reached all the way into New England dumped more than a foot of snow across Toledo and its surrounding counties.

Roads in 13 northwestern Ohio counties were closed to all but emergency travel through the morning. At least three counties in southeastern Ohio also were under Level 3 snow emergencies.

While snowfall totals were less in the rest of the state, much of Ohio was dealing with snow, sleet and ice from the storm that moved in late Monday afternoon. Temperatures were expected to fall into the single digits Wednesday morning and more snow could be coming later in the week.

Hospitals and health clinics in Toledo, Dayton and Columbus and several counties in western Ohio canceled their COVID-19 vaccination appointments on Tuesday, rescheduling the shots for the same time on Wednesday.

At the Ohio Statehouse in Columbus, lawmakers canceled more than a dozen legislative meetings scheduled for Tuesday. The House canceled all of its committee work while some Senate committee hearings were delayed or rescheduled for later in the week.