ON FOOTBALL: Planning, patience a must to replace players 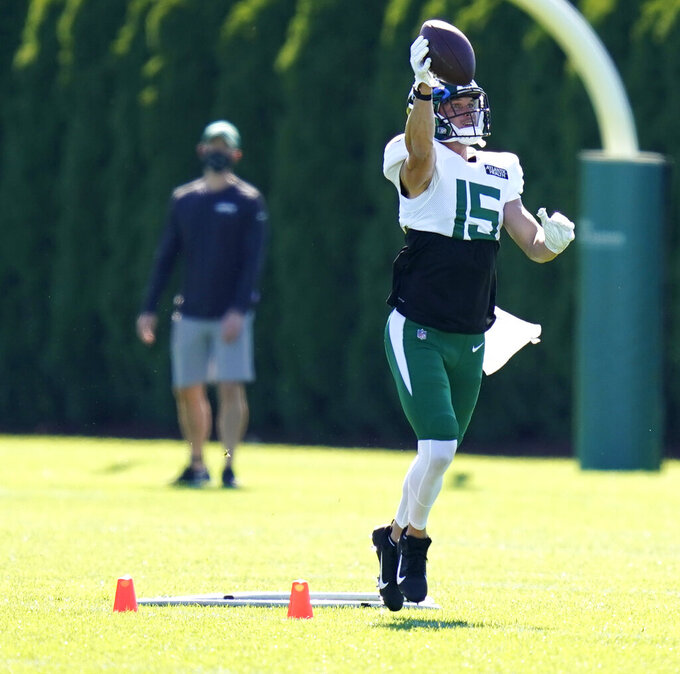 FILE - In this Thursday, Aug. 20, 2020, file photo, New York Jets' Chris Hogan makes a catch during practice at the NFL football team's training camp in Florham Park, N.J. Replacing an NFL player because of injury or play usually is as easy as a phone call and a plane ride. Chris Hogan only had to travel 30 minutes from Wyckoff, New Jersey, to the New York Jets' facility in Florham Park when he got the call. He agreed to terms Aug. 16, went through testing and signed on Wednesday before his first practice. (AP Photo/Seth Wenig, File)

NASHVILLE, Tenn. (AP) — Replacing an NFL player because of injury or play usually is as easy as a phone call and a plane ride.

Not during a pandemic.

NFL teams needing to replace an injured wide receiver, swap out linebackers or add a kicker this preseason have to follow the same testing protocols used at the start of training camps. That has shifted a daylong turnaround into a four-day process before a new player can finally join new team on the fifth day.

The “ready list” of potential replacement players has become much more complicated.

“We have to be pretty forward thinking in the process,” Titans general manager Jon Robinson said. “We have to make sure we have enough names of players that we think are worthy of bringing in for a workout at all the position groups, not knowing how practice is going to go on a day-in and day-out basis.”

Teams also are limited to bringing in eight players per day for tryouts. Again, there’s nothing simple about that.

A player who arrives on Monday must stay in a hotel separate from where the team is housing players during training camp. He goes to the team headquarters to be tested, then returns to his hotel room. Wait a day for a second test, return to the hotel. On the third day after two negative results, a team can work out the player.

“Provided they test negative a third time, then you can sign those guys and they can go into virtual meetings but really have to wait another day before going actually out onto the field,” Robinson said.

The Titans added quarterback Trevor Siemian on Aug. 19. Siemian had never been through a tryout process at anytime in the NFL, and was happy to join a team after throwing to his old left guard from Northwestern in a Chicago park the week before.

“It’s kind of a weird year for everybody,” Siemian said. “I think everybody is doing a pretty nice job, all things considered, adjusting and making it work.”

Wide receiver Chris Hogan only had to travel 30 minutes from Wyckoff, New Jersey, to the New York Jets’ facility in Florham Park when he got the call. He agreed to terms Aug. 16, went through testing and signed on Wednesday before his first practice.

“For the most part, I was just waiting around and waiting for the tests to come back,” Hogan said. “So it was a couple of days of being a little anxious to get in here. Obviously, I’m anxious to kind of start getting into the playbook. And, you know, a lot of catching up to do.”

The Niners needed lots of help at wide receiver with Deebo Samuel on the non-football injury list after foot surgery and Richie James Jr. placed on the Reserve/COVID-19 list.

Coach Kyle Shanahan said replacement players going through the same protocol makes it tougher to get players in at a time when rosters already are at 80 instead of the usual 90 in training camps. Timing is a challenge if placing someone on injured reserve to free up the roster spot and having the new player available.

And like everyone else, the defending NFC champs are looking for good players.

“That’s why we felt fortunate to get J.J. and Tavon when they were out there,” Shanahan said. “We needed numbers right away, but we also need some guys who have the skill set to challenge the guys we already have here.”

Final cuts trimming rosters to 53 are due by 4 p.m. ET on Sept. 5. The NFL and NFL Players Association agreed to an expanded practice squad for this season to 16 with teams able to protect four players each week from being poached by other teams.

Robinson said another conference call within the next two weeks will help finalize the NFL’s testing approach for the regular season. At least a couple negative test results likely will be necessary due to players traveling for a tryout.

“We’re just trying to navigate it,” Robinson said. “The good thing is that all 32 teams are going through the same thing. We’re all tasked with overcoming the same hurdles. It’s an even playing field. We’re just trying to keep the health and safety of our players and our staff at the forefront of everything.”