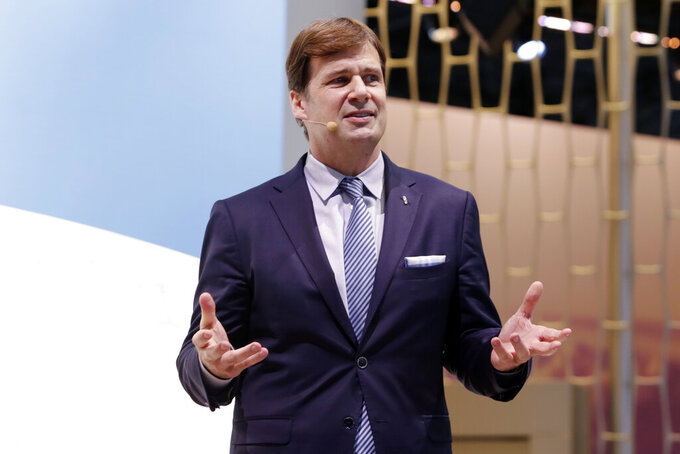 FILE - In this March 28, 2018 file photo, Jim Farley, Jr. executive vice president and president of Global Markets of the Ford Motor Company, is shown in this photo during New York International Auto Show. Farley will lead the storied automaker into the future starting Oct. 1 2020, when current CEO Jim Hackett retires. The company has struggled in recent years and is in the midst of an $11 billion restructuring plan designed to make it leaner and crank out new vehicles to replace what was an aging model lineup. (AP Photo/Richard Drew, File)

DETROIT (AP) — Jim Farley will lead Ford Motor Co. into the future as the global auto industry faces a new era of autonomous and electric vehicles.

The company named Farley, 58, as its new CEO effective Oct. 1, replacing Jim Hackett, who will retire after three years at the helm. Farley, who has been with Ford for more than a decade, had been chief operating officer since February and clearly was being groomed for the top position.

He faces tough challenges as the industry emerges from the coronavirus pandemic. Ford is losing money and is transitioning from an aging model lineup to new vehicles, including those powered by electricity. It's also in the midst of an $11 billion restructuring plan to cut costs and bureaucracy and make money off its autonomous vehicle unit.

Executive Chairman Bill Ford, the great grandson of founder Henry Ford, said the board briefly discussed looking outside for a CEO, but was inspired by Farley's leadership and felt the company is moving in the right direction. “We talked about it and we did throw some names around,” he said on a conference call Tuesday. “Every time we did that, we always felt that Jim Farley rose to the top.”

As COO, Farley led the company's global markets and product development. He was in charge as Ford rolled out a revamped F-150 pickup — the country's best-selling vehicle — the new Bronco off-road SUV brand and the electric Mustang Mach-E SUV.

Farley, who was hired away from Toyota by then-CEO Alan Mulally in 2007 to run Ford's marketing operations, said Tuesday that his main goal is for a smooth transition, but he has plans for the future that will be announced later.

The company, he said, would continue on the path set by Hackett, with priorities of reaching a 10% profit margin in North America, seeking immediate material and warranty cost improvements, fixing under-performing businesses, maximizing opportunities in commercial vehicles and outperforming the industry in rolling out new models.

The 117-year-old company, he said, would grow and expand where it is strong, like making the transition from internal combustion engines to electric powered commercial vehicles. It also wants to move more toward digital sales and add revenue from services such as electric vehicle charging and software, he said in an interview.

Ford has been phasing out most cars in recent years because they didn't make money. But that has left the company without low-priced vehicles. Farley said he wants to change that by using Ford's lower cost structure “to really create a lineup of more affordable products that go below what we offer today, so the brand is approachable and affordable, but do so in a profitable way.”

He wouldn't say whether the new vehicles would be cars or SUVs.

The 65-year-old Hackett took over for the ousted Mark Fields in May of 2017. Almost immediately he began reviewing Ford's management structure and flattened the organization so it could move faster. But his often lengthy directives confused employees who weren't clear on where the company was headed. In 2018, an analyst asked Hackett how much longer he expected to be with the company.

Investors weren't impressed during Hackett's tenure as analysts complained about the slow pace of restructuring. Ford shares lost 37% of their value under Hackett, but they closed 2.5% higher at $6.86 on Tuesday.

Hackett, a retired Steelcase office furniture CEO who had run Ford's mobility efforts, will stay on as an adviser through March. Bill Ford praised Hackett for taking difficult steps to modernize the company, reducing bureaucracy, and preparing it for the future.

“We now have compelling plans for electric and autonomous vehicles, as well as full vehicle connectivity. And we are becoming much more nimble,” Ford said. He cited Ford’s quick shift to make ventilators, face shields and other protective equipment at the start of the coronavirus pandemic.

Hackett also made the difficult decision to move Ford out of the sedan business in the U.S. as the market shifted dramatically to SUVs and trucks.

It was apparent that Farley would take over as CEO in February, when Ford announced a management shakeup after a poor fourth-quarter financial performance and the botched launch of the Explorer SUV.

Ford’s full-year profit plunged last year by more than $3.6 billion. It lost nearly $2 billion in the first quarter this year, and made just over $1 billion in the second quarter only because of an increase in the value of its autonomous vehicle unit.

Hackett has said the company fell short of expectations for last year, and he blamed the performance largely on the flubbed launch of the new Explorer at a factory in Chicago.

Morningstar analyst David Whiston said the jury is still out on Hackett’s tenure as CEO because his restructuring efforts are still in progress. “If the fitness moves started under him eventually lead to nice free cash flow generation, then history may be kinder to Hackett than his critics have been while he was CEO,” Whiston said.

This story has been corrected to show that Ford's stock price dropped 37% since Hackett became CEO, not 25%.