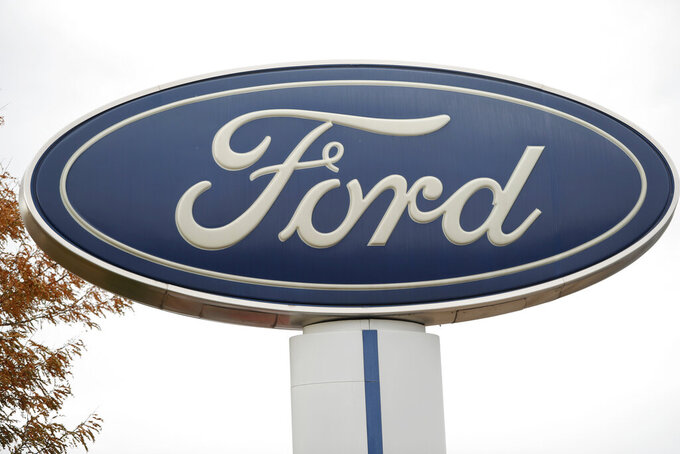 CORRECTS TO 15% TO $34.3 BILLION NOT NEARLY 16% TO $31.3 BILLION FILE - In this Oct. 20, 2019, file photo, the company logo stands over a long row of unsold vehicles at a Ford dealership in Littleton, Colo. Ford Motor Co. posted a $2 billion first-quarter net loss, blaming nearly all of it on the negative effects of the coronavirus. The automaker said Tuesday, April 28, 2020 that its revenue from January through March fell nearly 15% to $34.3 billion as most of its factories were shut down for the final week of the quarter. (AP Photo/David Zalubowski, File)

DETROIT (AP) — Ford Motor Co. posted a $2 billion first-quarter net loss, blaming nearly all of it on the impact of the coronavirus outbreak.

The automaker said Tuesday that its revenue from January through March fell nearly 15% to $34.3 billion as most of its factories were shut down for the final week of the quarter.

Excluding one-time items the company lost 23 cents per share. That was worse than Wall Street estimates of an 8-cent-per-share loss, according to FactSet.

Ford's stock fell about 4.5% in after-market trading after the release of the earnings report.

Chief Financial Officer Tim Stone told reporters Thursday that the company had about $35 billion in cash as of April 24, enough to sustain operations through the end of the year even if U.S. factories aren't restarted.

He said Ford is working with the United Auto Workers union to get factories back up and running, although he wouldn't give a date.

Before taxes, Ford lost $632 million for the quarter, and Stone said if it weren't for the virus it would have posted a pretax profit of $1.4 billion or more. That, he said, was on track or better than the company's guidance issued in February.

Ford earlier withdrew its full-year guidance for 2020, and Stone said the situation is too uncertain to make any predictions for the year. But he said the company expects a pretax loss of $5 billion in the second quarter.

Ford is continuing with its $11 billion restructuring plan despite the virus, Stone said.

“We've taken decisive actions to lower our costs and capital expenditures and been opportunistic in strengthening our balance sheet and optimizing our financial flexibility,” Stone said.

Despite the virus, the company made $346 million before taxes in North America, its most lucrative market. But the rest of the world posted losses, driving automotive operations to a $177 million pretax loss.

Ford has borrowed $15 billion from existing credit lines, deferred some executive salaries and cut its dividend in an effort to conserve cash due to the crisis. Earlier this month the Dearborn, Michigan, company floated $8 billion in bonds at interest rates ranging from 8.5% per year to 9.625% in an effort to prepare for the downturn. They mature from 2023 to 2030.

North American factories at Ford and other automakers have been shut down since late March, cutting off the companies' main source of revenue. Some companies have announced plans to restart factories but Ford, General Motors and Fiat Chrysler still are negotiating a date with the United Auto Workers union.