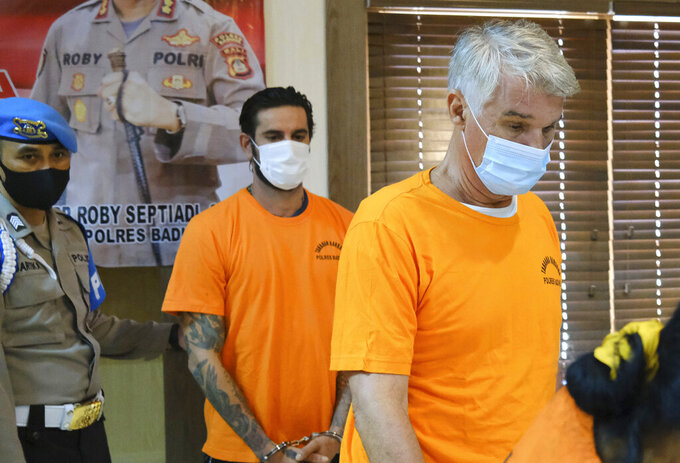 British national Kenneth Daniel Kutsch, right, and Italian national Francesco D'alesio, walk as they are shown to the media during a police press conference in Badung, Bali, Indonesia, Monday, May 24, 2021. The British hotel owner and the Italian tourist were arrested for alleged possession of narcotics on Indonesia's resort island of Bali, police announced Monday. (AP Photo)

DENPASAR, Indonesia (AP) — A British hotel owner and an Italian tourist have been arrested for alleged possession of narcotics on Indonesia's resort island of Bali, police said Monday.

The two men, dressed in orange, were shown to journalists at a news conference.

Kenneth Daniel Kutsch, a British man who has a hotel business on neighboring Lombok island, and his Indonesian partner, Ni Ketut Dewi Seniwati, were arrested in the parking lot of a restaurant in Bali on May 7 after residents reported narcotic transactions in the area, police said.

“We are still deepening the investigation. But judging from the evidence, it could lead to him being a dealer,” Septiadi said at the news conference.

Badung police said they also arrested Italian tourist Francesco D’Alesio for possession of 94 grams (3.2 ounces) of cocaine valued at 400 million rupiah ($28,000) on May 13.

Police said D’Alesio has been stranded on Bali because of the COVID-19 pandemic and has actively used cocaine during his stay.

“We are still investigating the large amount of evidence we have obtained to determine the source of the narcotics,” Badung police Narcotic Unit chief I Putu Budi Artama said.

Indonesia has extremely strict drug laws, and convicted dealers are sometimes executed by firing squad. More than 150 people are currently on death row, mostly for drug crimes. About one-third of them are foreigners.

Last year, an American man was sentenced to 9 1/3 years in prison after he was found guilty of selling cocaine and marijuana on Bali.