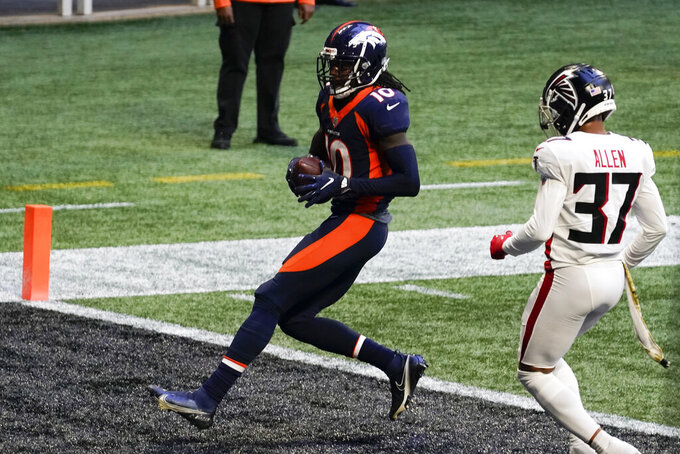 When it was time for the Las Vegas Raiders to make their first pick of the NFL draft this year, they had their choice of all the receivers with the 12th selection.

The decision they made to take the speedy Henry Ruggs III over the more polished Jerry Jeudy will resonate in the AFC West for years to come because the rival Denver Broncos scooped up Jeudy three picks later.

The two former Alabama stars will face off for the first time as pros on Sunday when Ruggs and the Raiders (5-3) host Jeudy and the Broncos (3-5).

“We loved all those receivers, we really did,” Raiders coach Jon Gruden said. “CeeDee Lamb, Jeudy, there’s about 10 of them. I tried to get seven or eight of them selected this year, but we only got a few of them. Jeudy, he’s smooth. That’s the best way to define him, he is really smooth. He knows how to run routes. ... You could probably show him the route you want done one time, and he could do it. He really knows how to creatively express himself on the football field. I love watching him play.”

Jeudy has had a bigger impact so far as a rookie. He has 30 catches for 484 yards, the fourth most of any of the rookie receivers, and is getting better each week.

After setting a career high with 73 yards receiving two weeks ago against the Chargers, Jeudy did even better last week with seven catches for 125 yards and a TD against Atlanta.

“Jerry is hitting his stride,” quarterback Drew Lock said. “He’s asserting himself in that wide receiver room and in the NFL. ... He’s doing his job extremely well right now and he’s playing really, really hard. That’s one thing you’ll see when you watch his film is that Jerry plays extremely hard."

Ruggs hasn’t been nearly as productive even as he has provided a few big highlights. Three of his 10 catches have gone for at least 40 yards, including a 72-yard TD in a win over Kansas City.

But he has only four catches for 43 yards the past three games.

“We’ve been trying so many times to hit some big plays,” quarterback Derek Carr said. “We’ve hit a couple and then we’ve been like this close on I feel like more. I feel like we’ve left more out there than we’ve gotten."

The big disappointment for the Raiders in their first season in Las Vegas is they haven’t been able to play home games in front of their fans because of the pandemic. That might be contributing to the team’s 1-2 record at sparkling new Allegiant Stadium, compared to a 4-1 mark on the road.

“That’s really disappointing,” Gruden said. “We only got one fan that comes to the game, so we blame Bob Stiriti, our security man, he’s our only fan. We have to get Bob Stiriti fired up to make some noise. That’s been a real problem. We love playing in our stadium. We have tremendous respect for who we represent. It sickens us that we can’t play in front of our fans, but we have to do better.”

The Broncos expect to have starting cornerbacks A.J. Bouye (concussion) and Bryce Callahan (ankle) back Sunday after both missed last weekend’s game at Atlanta. The Broncos re-signed De’Vante Bausby this week, but he won’t be available as he goes through COVID-19 testing protocols.

Broncos coach Vic Fangio, for one, isn’t surprised by former Denver RB Devontae Booker’s success with the Raiders this season. Booker has 223 yards rushing on 33 carries. His 6.76 yards per carry lead all running backs with at least 30 attempts and have taken pressure off Josh Jacobs. Booker spent his first four seasons in Denver but had only two carries last year despite playing all 16 games.

"He just needed his opportunity and he’s made the most of it out there with the Raiders,” Fangio said. “I’ve been very impressed with his play. His stats bear that out, his film bears that out, and they’re using him and he’s a damn good back.”

DE Shelby Harris will miss his second consecutive game after testing positive for the coronavirus Wednesday.

“It’s a big blow,” Fangio said. “He’s been playing very, very well this season for us. He’s probably having the best season of his career up to this point."