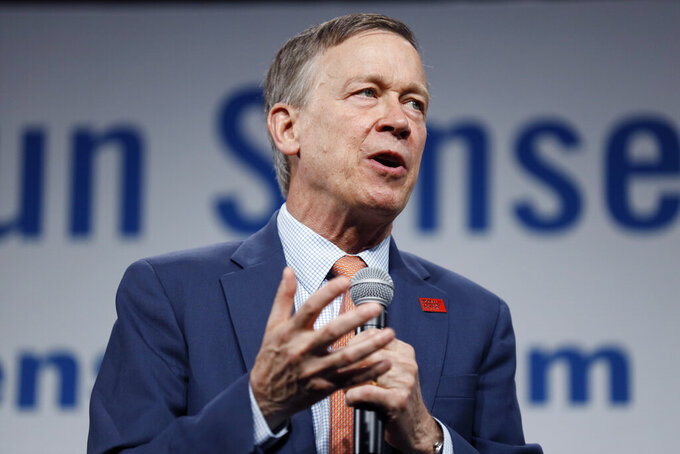 DENVER (AP) — The Colorado Independent Ethics Commission held former Gov. John Hickenlooper in contempt Thursday for defying orders to appear at a hearing on a Republican complaint that private plane trips he took while governor violated the state's gift ban.

The commission had subpoenaed Hickenlooper to testify after his legal team argued that the hearing's remote format violates his right to face his accusers. His taxpayer-funded attorney, Mark Grueskin, appeared instead.

Late in the day, Grueskin offered to have Hickenlooper appear at a June 16 hearing but the commission rejected the last-minute offer.

Commissioners voted unanimously on the contempt motion and will reconvene Friday to discuss sanctions against Hickenlooper, a Democrat who is seeking a U.S. Senate seat.

Those sanctions can include fines and imposing costs associated with the proceedings.

“Your client has willfully chosen not to appear here,” panel chair Elizabeth Espinoza Krupa told Grueskin. “I’m not willing to wait until the 16th.”

The ethics commission, a quasi-judicial civic body, will consider the ethics complaint after it decides on contempt sanctions.

The case comes at an awkward time for Hickenlooper, who faces a June 30 Democratic primary against former Colorado House Speaker Andrew Romanoff. The winner will challenge Republican U.S. Sen. Cory Gardner in the November election, and Hickenlooper has the backing of national Democratic Party leaders. Voters will start receiving mail ballots next week.

The ethics panel originally had asked Hickenlooper to suggest some dates for in-person testimony, and the Public Trust Institute also said it preferred an in-person hearing. Hickenlooper proposed hearings be held in August. The commission decided instead to proceed with Thursday’s hearing.

“In order to put an end to the partisan political circus orchestrated by a dark money Republican group, Governor Hickenlooper offered to testify, and though that was rejected, he remains ready to appear,” Miller said in a statement.

Romanoff issued a statement after the hearing, saying “Coloradans deserve a chance to weigh the facts before they vote next week. Mr. Hickenlooper should testify now.”

The group plans to spend millions of dollars in Colorado to defend Gardner's seat.

The Public Trust Institute, a conservative group led by Frank McNulty, a former Republican speaker of the Colorado House, has alleged that Hickenlooper violated Colorado’s ethics law by taking free flights on private jets as governor. Hickenlooper, who was governor from 2011 to 2019, has denied the accusations as politically motivated.

The complaint deals with travel to Turin, Italy, for a meeting of government, business and financial leaders, and a separate trip to Connecticut on a jet owned by billionaire Larry Mizel’s company, MDC Holdings, to preside at the commissioning of the USS Colorado, a U.S. Navy submarine. MDC Holdings is a large developer in Colorado.

Colorado law at the time prohibited gifts worth more than $59 to elected officials with limited exceptions. That figure is now $65.

“Coloradans expect that their public officials are not magnets for VIP signs,” said attorney Suzanne Staiert, representing the institute.

Grueskin countered that “some of the allegations made about appearance of impropriety and about the nature of some of the plane gifts would not meet (a) preponderance of the evidence standard” needed to find that the ex-governor violated ethics laws.

Late Wednesday, a Denver district court judge dismissed a bid by Hickenlooper to quash the subpoena that he appear at the hearing, which was being conducted remotely because of the coronavirus pandemic.

In voting on the contempt motion, commissioners noted that Colorado courts have switched to remote hearings during the pandemic in non-jury cases.