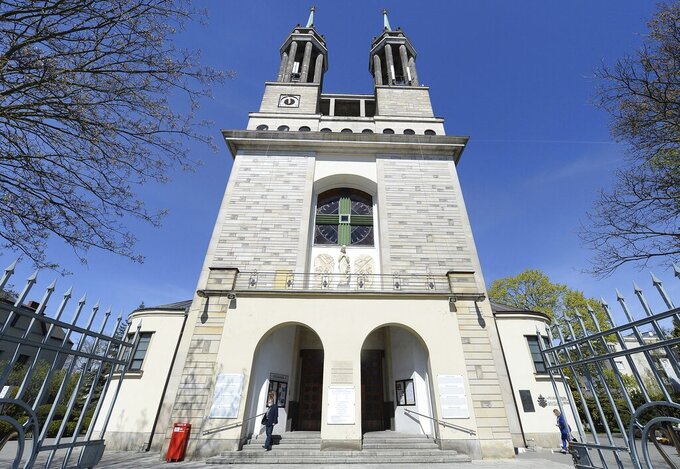 In this photo taken April 23, 2020, an unusual sight of a mailbox on church grounds at St. Stanislas Kostka church, the parish church of Poland's ruling party leader Jaroslaw Kaczynski, in Warsaw, Poland, who wants to go ahead with a postal vote for the presidential election despite the COVID-19 pandemic. The Polish government’s determination to move forward with the May 10, presidential election during the coronavirus pandemic by making it an all-postal vote is creating anxiety and anger, and critics say the plan threatens public health and democracy in Poland.(AP Photo/Czarek Sokolowski)

WARSAW, Poland (AP) — Former European Council president Donald Tusk appealed Tuesday for a boycott of the upcoming presidential election in his native Poland, saying the postal vote the government has proposed carries health risks amid the coronavirus pandemic and would not meet democratic standards for free, equal and transparent elections.

Tusk, who served as Poland’s prime minister during 2007-2014, said in a video on Twitter that he would not “not take part in the voting procedure" for the May 10 balloting. He said the vote promoted by the right-wing ruling party “has nothing to do with an election.”

Poland’s governing Law and Justice party is pushing to have the election held as planned, arguing that an all-mail vote could take place safely. Law and Justice backs the reelection bid of President Andrzej Duda, who currently leads in opinion polls.

The candidate for the centrist Civic Platform founded by Tusk, Malgorzata Kidawa-Blonska, said she would not take part in the vote, either.

Despite the ruling party's determination, the election could be held up. A bill regulating the proposed postal balloting is pending in the Senate and may not come to final vote until May 7. The opposition and a faction inside the government are in talks about postponing the vote.

The European Union parliament and the Organization for Security and Cooperation in Europe have also spoken against holding the election during the pandemic.

Poland's influential Roman Catholic bishops issued a carefully worded appeal to Law and Justice and opposition parties, asking them to “seek such solutions through dialogue that would raise no legal doubts" and would respect the democratic principles of “free and honest elections.”