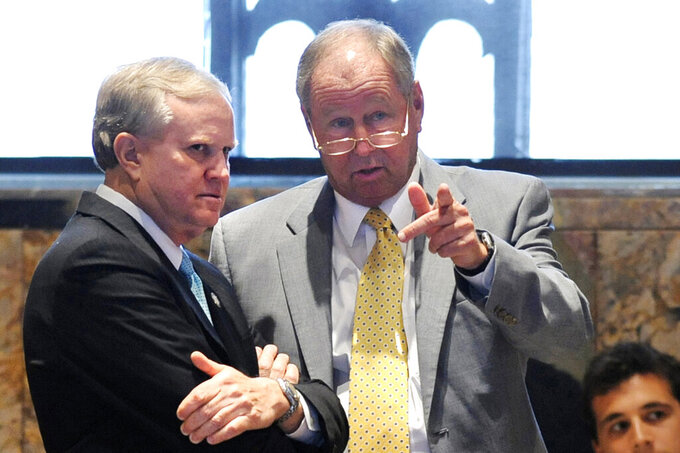 FILE - In this June 4, 2012, file photo, state Sen. Conrad Appel, left, R-Metairie, and state Rep. Steve Carter, R-Baton Rouge, confer at the side of the House Chamber during the debate on Appel's Senate Concurrent Resolution 99, a $3.4 billion dollar spending plan for public schools, on the closing day of the 2012 legislative session at the state Capitol in Baton Rouge, La. Former Louisiana lawmaker Steve Carter, a Baton Rouge Republican who championed school choice issues during his three terms in the state House and spoke strongly in favor of following health guidelines to stop the spread of the coronavirus, died Tuesday, Jan. 26, 2021, of complications from COVID-19. He was 77. (Travis Spradling/The Advocate via AP)

BATON ROUGE, La. (AP) — Former Louisiana lawmaker Steve Carter, a Baton Rouge Republican who championed school choice issues during his three terms in the state House and spoke strongly in favor of following health guidelines to stop the spread of the coronavirus, died of complications from COVID-19. He was 77.

“It is with very heavy hearts we report that Steve has lost his battle with COVID-19 tonight, surrounded by his family,” Melder said in a statement.

Condolences continued to pour in Wednesday from officials who knew and served with Carter, who was in the Louisiana House of Representatives from 2008 until 2020, including a term as chairman of the House Education Committee.

Gov. John Bel Edwards, a Democrat who was a House lawmaker with Carter, offered his condolences in a statement and asked for prayers for Carter's family.

Republican House Speaker Clay Schexnayder said in a statement Wednesday that Carter “will be remembered for his commitment to education and his dedicated service to Louisiana and the capital area region.”

"He will stand as an example for future generations of public servants looking to better their communities," Schexnayder said.

A one-time Louisiana State University tennis coach, Carter was forced out of the House by term limits. He lost races for the state Senate in 2019 and to unseat Baton Rouge Mayor-President Sharon Weston Broome, a Democrat, last year.

While some Republican state lawmakers criticized Edwards' statewide mask mandate, implemented to stop the spread of the coronavirus, Carter supported it, and it partly cost him the endorsement of his party in the mayoral race, party chair Woody Jenkins was quoted by The Advocate as saying.

The newspaper had previously quoted Carter as saying that if he was elected mayor-president, he would sponsor a massive education campaign to let residents know the virus is serious, and that they need to wear a mask, social distance and wash their hands.

Broome, also a forceful proponent of mask-wearing and other virus-containment measures, described Carter as “an honorable man, whose passion and thoughtfulness elevated the discourse during our recent contest for mayor-president. You never saw him without a smile on his face and a hand extended to greet you."

Carter is survived by his wife, Gloria, two children and four grandchildren.