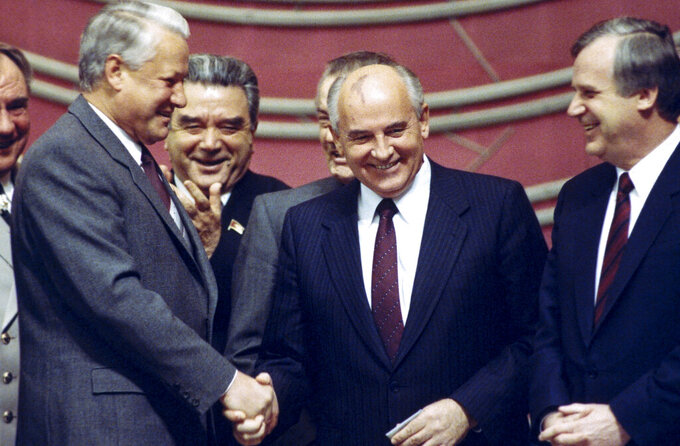 FILE - In this Thursday, Nov. 8, 1990 file photo, in a spontaneous and rare moment of accord between the Soviet Union's most popular politicians, rivals Boris Yeltsin, left, and Mikhail Gorbachev shake hands at a Kremlin ceremony on the 73rd anniversary of the Bolshevik Revolution in Moscow. Former Soviet leader Mikhail Gorbachev turned 90 on Tuesday March 2, 2021,, receiving greetings from the Kremlin and global leaders while Russians remained divided over his legacy. (AP Photo/Alexander Zemlianichenko, File)

Gorbachev, who has stayed in a hospital as a precaution amid the coronavirus pandemic, was scheduled to have a video call Tuesday with his aides and associates who gathered at his foundation to congratulate him.

Russian President Vladimir Putin congratulated Gorbachev in a letter published by the Kremlin, hailing him as “one of the most outstanding statesmen of modern times who made a considerable impact on the history of our nation and the world.” Putin also praised Gorbachev for continuing to work on international humanitarian projects.

Speaking in an interview with the Tass news agency published Tuesday, Gorbachev reaffirmed that the domestic political reforms he launched and his efforts to end the Cold War had no alternative.

“I deeply believe that Perestroika was necessary and we were taking it in the right direction,” he said. “The main domestic achievement was to give freedom to the people and put an end to the totalitarian system. And the most important things on the international stage were ending the Cold War and conducting radical nuclear weapons cuts.”

Gorbachev again lamented the hardline coup in August 1991 staged by the Communist Party's old guard that briefly ousted him and precipitated the collapse of the Soviet Union.

“It was possible to preserve the Soviet Union, naturally in a revived and reformed shape that would have given broad rights to the republic," Gorbachev told Tass.

Asked if it's still possible now to restore the Soviet Union, he answered that it's necessary to focus on normalizing ties with its ex-Soviet neighbors and developing regional alliances.

Putin, who famously lamented the Soviet demise as “the greatest geopolitical catastrophe of the 20th century," has avoided personal criticism of Gorbachev but has often been critical about his policies and held the Soviet leader responsible for putting too much trust in the West.

During Putin's 21-year rule, Russia's relations with the West have plunged to post-Cold War lows over Moscow's 2014 annexation of Crimea, the Kremlin's meddling in the 2016 U.S. presidential election, hacking attacks, and, most recently, the poisoning and jailing of Russian opposition leader Alexei Navalny.

While Gorbachev has received international accolades for helping end the Cold War and launching liberal reforms that ended the Communist monopoly on power, many Russians have held him responsible for the collapse of the Soviet Union that led to a devastating economic meltdown and political turmoil.

A poll conducted by the All-Russia Opinion Research Center (WCIOM), had 51% of respondents saying that he brought the nation more harm than good, while 32% said it was about equal, 7% viewed his action as mostly positive and the rest were undecided. The nationwide poll of 1,600 was conducted Sunday and had a margin of error of no more than 2.5 percentage points.