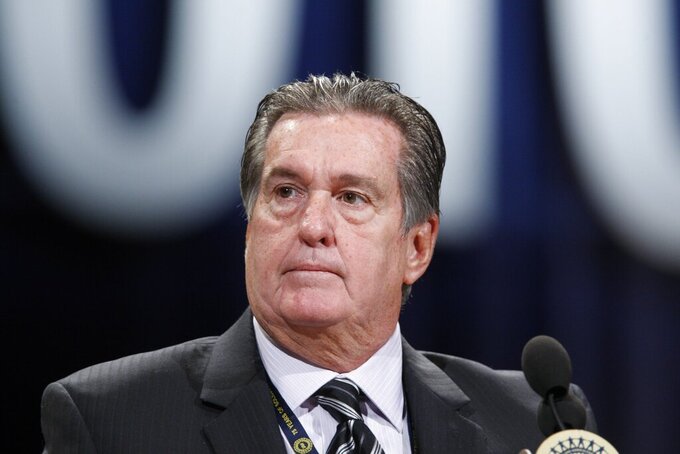 FILE - In this June 17, 2020, file photo, United Auto Workers Vice President Joe Ashton addresses the autoworker's convention in Detroit. Ashton, a former United Auto Workers vice president who took a $250,000 kickback on a watch contract was sentenced Tuesday, Nov. 17, 2020, to 2 1/2 years in prison, the latest punishment in what the government calls "systemic" corruption at the highest ranks of the union. (AP Photo/Carlos Osorio, File)

DETROIT (AP) — A former United Auto Workers vice president who took a $250,000 kickback on a watch contract was sentenced Tuesday to 2 1/2 years in prison, the latest punishment in what the government calls “systemic" corruption in the highest ranks of the union.

Joe Ashton, 72, of Ocean View, New Jersey, had hoped for house arrest, noting his wife has multiple sclerosis and needs constant care. But the judge said a prison term was appropriate for a crime that shook the faith of thousands of union members.

“We have to send a message,” U.S. District Judge Bernard Friedman said over Zoom. “We have to let people know that the criminal justice system is not a system that's only for people on the streets selling drugs and things of that nature. ... Sometimes good people do bad things."

Ashton doesn't have to report to prison until June because of the risk of the coronavirus, the judge said.

Ashton led the union’s General Motors department until July 2014 and also had a seat on the automaker’s board. He awarded a $3.9 million contract from the UAW-GM training center for thousands of watches that were produced but never given to union members.

“I cannot tell you how ashamed and remorseful I am for what I've done," Ashton said.

The government had asked for a two-year, 10-month prison term. The judge took an unusual step by allowing Ashton's family members and a friend to plead for mercy.

“I depend on Joe for so much on a daily basis,” his wife, Denise, said over video conference.

Eleven union officials and a late official’s spouse have pleaded guilty since 2017, including former presidents Dennis Williams and Gary Jones. Not all the crimes were connected, revealing the breadth and diversity of the corruption.

“As the government’s prosecution of the UAW has revealed, the culture of corruption within the senior leadership of the UAW is systemic," Assistant U.S. Attorney Frances Carlson said in a court filing. “The need to transform the unethical, greedy, and self-indulgent behavior characteristic of the UAW leadership is long overdue.”

The current president, Rory Gamble, said the union has adopted reforms in response to the scandal.

A group within the UAW wants members to directly elect union officials.

“Until real checks and balances are put in place, there cannot be accountability,” said Scott Houldieson, a longtime member in Chicago.