A Fourth with less fizzle during pandemic in New England 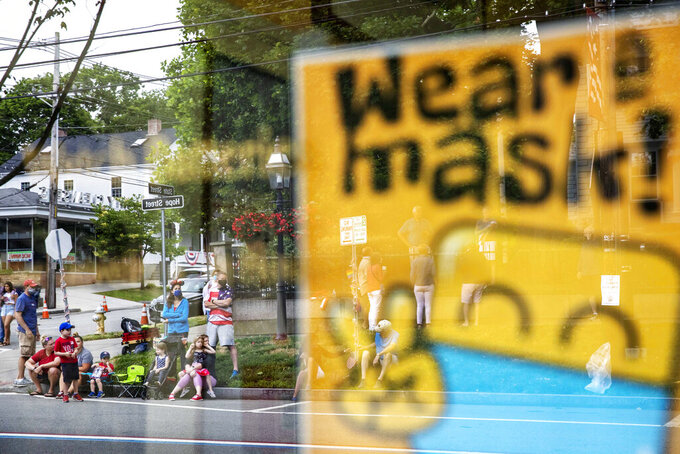 Parade goers are reflected in a storefront window posting a sign for customers to wear face masks before a Fourth of July parade begins Saturday, July 4, 2020, in Bristol, R.I. The town, which lays claim to the nation's oldest Independence Day celebration in the country, held a vehicle-only scaled down version of its annual parade Saturday due to the coronavirus pandemic. (AP Photo/David Goldman)

The Fourth of July had many of the traditional trappings in New England despite the coronavirus pandemic: Cheap lobsters, warm weather and barbecues. But absent were large crowds and most public fireworks displays on Saturday.

The pandemic contributed to a low-key Independence Day.

Innkeepers were worried about empty rooms because people weren’t traveling as much as normal. Nonetheless, people continued the traditions of barbecues and family gatherings.

Here are some coronavirus-related developments in New England:

The U.S. Air Force Thunderbirds, several bombers including stealthy B-2 Spirit, F-22 fighters and other military jets provided the noise in the sky over Boston in the absence of a public fireworks display. Boston was one of the Air Force flying team's visits planned for Saturday.

Public beaches were open but sunbathers had to distance themselves and forgo organized sports like football or volleyball.

Gov. Charlie Baker urged caution so that Massachusetts would not “move backwards” in the fight against the coronavirus. “The last thing we want to do is move backwards as we’ve seen other states have to do,” he said.

On Saturday, the Massachusetts Department of Public Health reported another 23 deaths and 210 newly reported cases on Saturday. The death toll for Massachusetts stood at 8,172.

A group that has held multiple rallies to protest restrictions imposed because of the coronavirus announced Saturday a new Declaration of Independence at the New Hampshire Statehouse.

The event hosted by ReopenNH was meant to celebrate liberty on a day when many traditional Fourth of July events have been canceled. There were to be prayers, speeches, music and lawn games, and decorated vehicles and children on bicycles circled the Statehouse for a parade.

Andrew Manuse, the group’s chairman, also announced a new initiative inviting “every free person in the State of New Hampshire to protest the governor’s unlawful orders by ignoring them flatly and turning any busybody away with emphasis.”

“By all means, if you want to wash your hands or wear a mask, be our guest, but keep your nanny-state snootiness to yourself,” he said in a statement. “Happiness means different things to different people, and in America, that is OK so long as government stays out of the way.”

What's billed as the oldest Fourth of July celebration in the country, in Bristol, was scaled back but not canceled because of the pandemic.

The day started with a rolling celebration with vehicles festooned in red, white and blue, and the 88th Army Band performing in a flat-bed truck. Social distancing was the rule of the day, and fireworks display in Bristol Harbor was postponed.

The parade was first held in 1785. The 235-year-old celebration has taken place every year since then though there have been modifications over time, including this year during the pandemic, said Michele Martins, chairwoman of the planning committee.

The Maine Windjammer fleet and charter boat companies were given the green light to resume operations ahead of the Fourth. But they’re changing the way they do business.

Maine’s Windjammer fleet can resume trips with guests, but guests will be pre-screened and there will be upgraded sanitizing.

In South Portland, Casco Bay Custom Charters said it’s reducing the number of boats on the water. Owner Jim Gallea said his business is down $100,000 compared to last year and doesn’t expect to reach the 450 bookings he got in 2019, instead hoping he can get 150 trips this season.

The Maine Center for Disease Control on Saturday reported two more deaths, with another 23 people testing positive. That brings Maine's death toll to 107 and the number of positive tests to 3,397.

Vermonters in need of food during the coronavirus pandemic now need to sign up in advance for a federally funded food distribution program that has handed out food to thousands of residents amid the pandemic.

The food distribution sites have been at airports around the state. Since the Farmers to Families Food Box Program started on May 15, the Vermont Foodbank, Vermont Agency of Transportation, Vermont National Guard, and the Abbey Group have worked to distribute produce, dairy products, and chicken to people left hungry by the COVID-19 pandemic, The Times Argus reported.

Food insecurity in Vermont has increased by 46% since the pandemic hit, exceeding what was seen during the Great Recession, said Nicole Whalen, director of communications and public affairs at the Vermont Foodbank.

The first-come, first-served line of cars at state airports will be replaced by more controlled, regular distributions.