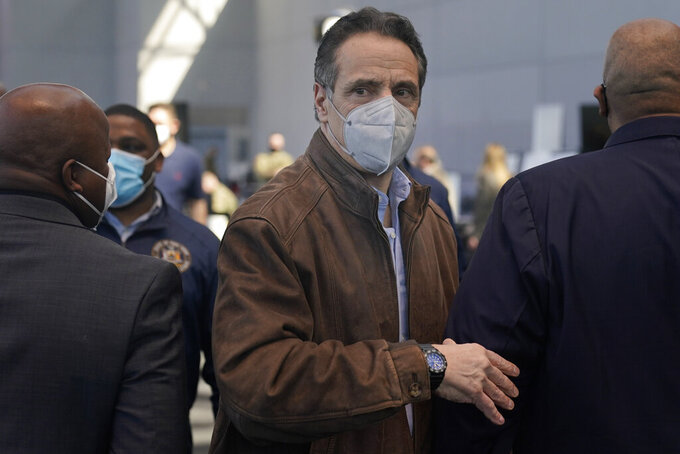 NEW YORK (AP) — To Fox News Channel's Janice Dean, New York Gov. Andrew Cuomo is a liar and a criminal. He blames others for his “disastrous decisions.” He needs to resign — no, that's not enough.

Dean isn't a political commentator — she's Fox's senior meteorologist. In the past year, though, a searing personal loss has transformed her into a fighter for families who believe that a Cuomo-backed policy encouraging the transfer of COVID-19 positive patients into nursing homes was a deadly error.

Cuomo has defended his directives, saying they followed scientific guidelines. His office did not return messages seeking comment about Dean.

Yet Dean has made some dubious public claims about the impact of Cuomo's nursing home order and another news organization's coverage. Her newfound role raises ethical questions for Fox.

March and April 2020 was a nightmare in New York, with the new coronavirus spreading wildly. The timing was particularly cruel for Michael and Dolores Newman — the parents of Dean's husband, Sean, known to family and friends as Mickey and Dee. Brooklyn through and through, they were married three days before Valentine's Day 1961.

The 83-year-old Mickey, a former firefighter, was in the Grandell Rehabilitation and Nursing Center in Brooklyn with dementia and other issues. Dee was in assisted living, at the Long Island Living Center, and hoped Mickey would join her when his health improved.

Looking into the deaths, the family was flabbergasted to learn of the Cuomo administration’s March 25 directive that nursing homes could not deny admission to someone solely because they had COVID-19. The policy was expanded to cover assisted living facilities on April 7.

New York was desperately worried about running out of hospital space then. Cuomo insisted care was taken and that it was wrong to discriminate against people because they had COVID.

By May, the order was rescinded. Stories emerged about the lengths to which the governor and his staff went to conceal the number of virus deaths among New York nursing home residents. Dean couldn't believe the vulnerable were put at such risk.

She didn't talk about it publicly at first. That changed after watching CNN last May when Chris Cuomo brandished a giant cotton swab to joke about the big nose of his brother, the governor.

Dean was swimming against a powerful tide. Cuomo was popular, his televised coronavirus briefings earning praise from people who found then-President Donald Trump's performance wanting. He even wrote a book on leadership.

Now, with a sexual harassment scandal swirling around him, things have changed. Dean’s disgust with Cuomo was on display last month when she kept a running commentary on Twitter during one of his news conferences.

“He is just a disgrace.”

“You are a criminal.”

Bill Hammond, senior fellow for health policy at the Empire Center for State Policy, said Dean was key to keeping the issue alive.

“Because she has a certain kind of celebrity, she attracts attention and she has access to the bullhorn of Fox News, and that's a powerful force,” Hammond said.

Dean has worked at Fox since 2004, and is the weather forecaster on “Fox & Friends.” She's told her family's story on the air to the show's hosts, to Carlson, to Sean Hannity, to Martha MacCallum, to Harris Faulkner and others.

The story hit Fox's sweet spot. For an audience dominated by conservatives tired of hearing Trump criticized for his pandemic response, here was an issue that raised serious questions about a politician lionized by many liberals.

Many news organizations have effectively used the personal experiences of employees to tell stories about the pandemic, said Kathleen Bartzen Culver, director of the Center for Journalism Ethics at the University of Wisconsin.

It becomes problematic when the personal turns political, she said. Journalists are generally forbidden from practicing politics.

Dean has spoken to young Republicans in Staten Island, on a virtual town hall sponsored by the state GOP chairman, at a rally hosted by Democratic Assemblyman Ron Kim, another Cuomo critic.

Fox wouldn't make an executive available to talk about Dean. A spokeswoman notes that Dean is not a news reporter, and is talking about an issue that deeply affected her family.

Dean said her bosses at Fox have been fully supportive.

“Obviously, it's a position that is probably a little uncomfortable for them because I'm the meteorologist and all of a sudden I'm into this role of being an advocate," she said. "But at the end of the day, my family was affected. And I feel like that is an important role to play if there are not people that have a voice in this.”

Making the connection explicit, she wrote that “their death warrant was signed as an executive order by New York Governor Andrew Cuomo to put infected patients into the places where our most vulnerable resided.”

Mickey Newman died at Grandell four days after Cuomo's order was issued. The CDC says the average period between exposure to the virus and symptoms appearing is five days. While not impossible for a person to get sick enough to die within four days of exposure, it's very unlikely, said Dr. David Boulware, a professor of infectious disease and international medicine at the University of Minnesota.

No one knows for sure how Dean's in-laws caught the virus, and their deaths are both tragedies. Yet there's other evidence to suggest transmission came from someone other than patients transferred to their facilities at the state's behest — like staff or visitors.

“We don't know the story,” said Donna Johnson, Dean's sister-in-law. “You try to ask. Nobody really answers you.”

The facilities wouldn’t talk about the Newmans to The Associated Press.

Meanwhile, the Cuomo administration's efforts to keep data secret, deflect any blame over outbreaks at nursing home and brush off questions about whether the state's policies worsened any outbreaks has made families suspicious.

Cuomo said recently the withheld data created a “void” that left angry and confused New Yorkers vulnerable to “conspiracy theories” and misinformation. “People get confused, and people who lost family members in nursing homes start to say, ‘I wonder if this is true. I wonder if my father died because somebody made a mistake,’” he said.

On. Jan. 30, Dean attacked NBC News and anchor Lester Holt on Twitter, saying they had “censored” a friend interviewed on the topic by making her say that New York had failed nursing home families, instead of Cuomo. But NBC provided to The Associated Press a tape of reporter Kristen Dahlgren's interview that disproves the notion. Dean said the tape was doctored, but offers no evidence to back that up.

The story fails to back up the idea that NBC was trying to protect Cuomo. Dahlgren quotes Dean's friend, Dawn Best, as saying a “third-grader” should know not to put COVID-19 patients into a nursing home, and it's clear she was referring to Cuomo. Best is also seen holding a sign saying, “Cuomo killed my mother.”

Dean waves off thoughts of a political future, but others don't.

“The best people who go into politics come at it organically, like people that weren't running for office their entire life,” McCain said. Dean “has this way of speaking for just average Americans that I find really compelling. I am one of the people behind the scenes that's been encouraging her to run for office.”

Said Dean: “I do not enjoy being part of this political mess right now with the governor. But I do feel it is a bit of a calling. I do.”

This story has been corrected to show the date Dean’s in-laws were married. They were married on Feb. 11, 1961, not on Valentine’s Day.