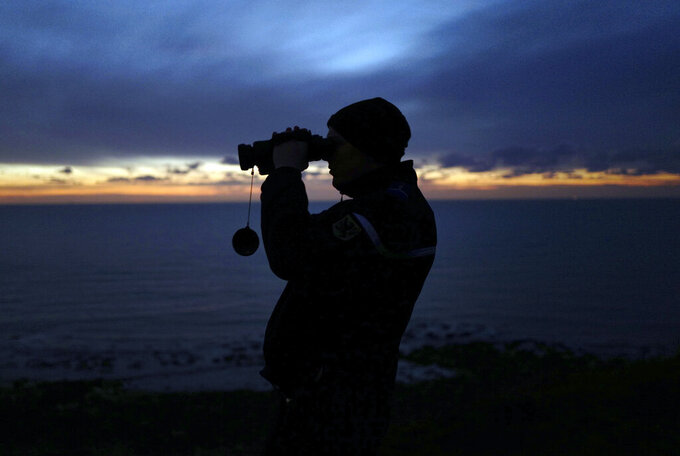 FILE - In this file photo dated Friday, Jan. 18, 2019, a French gendarme patrols the beach in Ambleteuse near Calais, northern France. Fifteen migrants have been saved Tuesday Oct. 27, 2020, and rescue and search operations are still under way, but at least four migrants, including a 5-year-old and 8-year-old child, have died Tuesday when their boat capsized while they and other migrants tried to cross the English Channel to Britain, French authorities said. (AP Photo Michel Spingler, FILE)

PARIS (AP) — French rescuers on Wednesday abandoned the hunt for survivors from a boat carrying migrants that capsized while trying to cross the English Channel to Britain, leaving at least four people dead.

British media identified the victims as a Kurdish-Iranian couple and two of their children. A further 15 people were rescued.

Emergency services called off their search on Tuesday night because of darkness and bad weather. They did not resume Wednesday morning because there was no chance of finding anyone still alive, according to an official with the French maritime agency for the Channel and North Sea region.

The BBC identified the dead family as Rasoul Iran-Nejad and Shiva Mohammad Panahi, both 35, and their children Anita, 9, and Armin, 6. It said the couple's 15-month-old son Artin is missing.

Politicians and aid groups said the deaths must prompt a change of course from the British government, which has promised in vain to stop migrants making the dangerous journey in small boats.

Opposition Labour Party lawmaker Yvette Cooper said “we have feared that we would see a tragedy like this for a long time.”

“The journey is perilous and we’ve seen an increase in the number of these small boat crossings, these really flimsy boats,” Cooper told the BBC. She said the government did not have “a clear enough analysis of the reasons why people are making this journey.”

French investigators are questioning the survivors to determine exactly how many people were aboard and if any others might have drowned, the French maritime official said. She could not confirm reports that a baby was among the missing.

The official was not authorized to be publicly named according to agency policy.

Herve Tourmente, deputy prefect of Dunkirk, said the vessel appeared to be a fishing boat, and capsized about 5 miles (8 kilometers) off the French coast. He said weather conditions “were not favorable at all.”

Migrants have long used northern France as a launching point to reach Britain — usually in trucks or on ferries — and the issue has long strained relations between the two countries.

Many migrants appear to have turned to small boats organized by smugglers during the coronavirus pandemic because virus restrictions have reduced traffic between France and Britain.

Britain’s Press Association news agency calculates that more than 7,400 migrants have crossed the Channel to the U.K. by boat so far this year, up from about 1,800 in all of 2019. French maritime officials have rescued hundreds more in routine operations in the Channel, a busy shipping lane known for high winds and strong currents.

British Prime Minister Boris Johnson expressed condolences for the tragedy, and vowed to “crack down on the ruthless criminal gangs who prey on vulnerable people by facilitating these dangerous journeys.”

But the British government’s tough stance — which has included using a military plane to patrol the Channel — has drawn criticism from aid and human rights groups, who say the U.K. should provide safe routes for people to seek asylum in Britain.

“The British and French governments must work together to expand safe and legal routes for desperate families fleeing conflict, persecution, and poverty,” Save the Children said in a statement.

“Parents shouldn’t be compelled to risk their children’s lives in search of safety and no child should have to make a dangerous, potentially fatal, journey in search of a better life.”