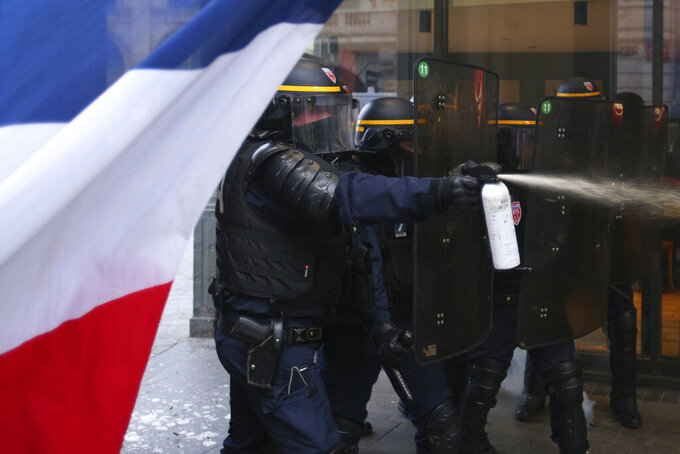 FILE - In this Jan.11 2020 file photo, a police officer uses gas during a demonstration in Lille, northern France. A summer of incidents, from insults to attacks, some deadly, has built into a crescendo of violence. But has France really grown more “savage” as Interior Minister Gerald Darmanin says? Or is the problem a growing sense of insecurity fueled by the word “savage” itself, as Justice Minister Eric Dupond-Moretti contends? The verbal jousting is causing divisions, and worrying critics who say the interior minister is exploiting the language of the far right to help President Emmanuel Macron’s party win upcoming elections. (AP Photo/Michel Spingler, File)

PARIS (AP) — The subject is serious: violence in French society. But senior ministers have been stumbling over each other’s words in a debate about how grave the problem really is and how best to describe what is happening.

A summer of incidents, from insults to attacks, some deadly, has built into a crescendo of violence. But has France really grown more “savage,” as Interior Minister Gerald Darmanin says? Or is the problem a growing sense of insecurity fueled by the word “savage” itself, as Justice Minister Eric Dupond-Moretti contends?

Crime statistics are unclear, but the language is having an impact. Darmanin — named interior minister in a government reshuffle two months ago — set the tone for a get-tough policy by saying that the “growing savageness of a part of society must be stopped.”

The disputed word — “ensauvagement” in French — means becoming wild or savage. It is a buzzword of the far right, often used to designate youths in rough housing projects, often of immigrant origin, in a changing France said to be losing traditional values like respect for authority. Some see it as a loaded term with racist undertones.

“Taking up the term ensauvagement is a major concession to the extreme right. This concept implicitly links the rise in violence to that of immigration ... to the ethnic mixing of society. Using it is a political error," tweeted lawmaker Aurelien Tache.

Critics contend the interior minister is exploiting the word to draw in new voters ahead of next year’s regional elections and the 2022 presidential vote.

Darmanin’s political roots are in the conservative right, but he joined forces with President Emmanuel Macron after the centrist won the 2017 presidential election. Dupond-Moretti, one of France’s most high-profile lawyers whose political sympathies are considered to be on the left, became justice minister in the July government reshuffle.

Macron has stayed clear of any reference to “savageness,” referring instead to growing “incivilities” in France.

The death in early July of a bus driver attacked by youths in the southwestern city of Bayonne after after he asked them to wear masks has been cited as a prime example of a grim new reality in a supposedly more violent France. Another example noted was the violence and looting on Paris’ Champs-Elysees Avenue after the Paris Saint-Germain soccer club lost to Bayern Munich in the final of the Champions League last month.

More than 230 small-town mayors, normally France's most-appreciated political figures, have lodged complaints about attacks, from insults to assaults. In a meeting Wednesday with mayors’ representatives, Prime Minister Jean Castex promised to ensure punishment for those who attack elected officials.

Still, Darmanin's critics say it's unfair to paint French society as savage. They say social media is magnifying violence, as people film and post more. The Socialist Party said in a statement Thursday that Macron's government should focus on training and hiring local police instead of chasing conservative votes.

Marine Le Pen, runnerup in the 2017 presidential election and leader of the far-right National Rally party, has spoken repeatedly of the growing “savageness” of French society. Less than a year ago, she presided over a conference entitled “From Delinquency to Savageness?” She tweeted Tuesday about a “summer of savagery,” while denouncing the government response. Le Pen, likely to stand against Macron again in 2022, has been using the term since 2013.

The justice minister says the word "savage” itself is the root of France's security problem. Dupond-Moretti said Tuesday on Europe-1 radio that the word creates “a sense of insecurity.” That sense, he said, is fed by economic difficulties, fears of the coronavirus and “populist talk” — and is harder to fight than actual insecurity.

There is no single set of statistics to measure whether crime and delinquency are rising or falling. A July report based on police rap sheets registers substantial increases in a dozen categories, including a 21 percent increase in assaults. But the Interior Ministry accompanies the figures with a warning, saying they could reflect a statistical catching-up after lockdown, when crimes in France and elsewhere plummeted.

To answer critics who contend the justice system is too lax, Dupond-Moretti promised new measures in the days ahead. The interior minister is expected to do likewise. So far, Darmanin has cracked down on drug use, with fines levied on anyone caught with marijuana or cocaine. That move went into effect Tuesday.

France's prime minister, meanwhile, tried to end the melee in his Cabinet.

“We’re talking about a serious subject, insecurity. The question isn’t the word we use to qualify the phenomenon but the actions we are going to take to deal with it,” Castex said Tuesday. “End of story.”