Franklin, Hall vie for a few weeks in Congress from Georgia 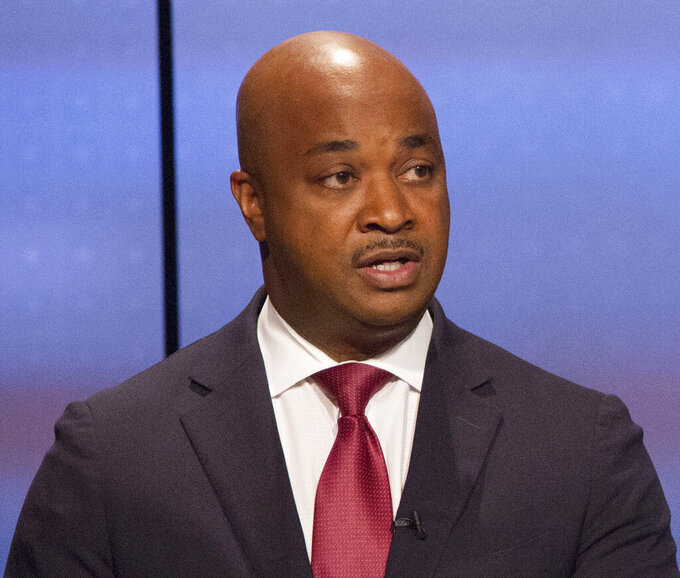 In this Sunday, Oct. 22, 2017 photo, Kwanza Hall answers a question during the Atlanta Police Foundation's Atlanta Mayoral debate hosted by WSB-TV at their studios in Atlanta.. Crime and safety were the main topic of discussion during live debate. (Phil Skinner/Atlanta Journal-Constitution via AP)

ATLANTA (AP) — A small number of ballots on Tuesday could decide an extremely short term in Congress as voters in Georgia pick the man who will succeed the civil rights legend John Lewis, if only for a few weeks.

Former Atlanta City Council member Kwanza Hall and former Morehouse College President Robert Franklin are contesting a runoff after neither won a majority in a first round of voting in September among seven candidates. Both are Democrats.

The district includes much of the city of Atlanta and adjoining parts of DeKalb and Clayton counties. The seat was long held by Lewis, who died from pancreatic cancer in July. But neither man will be Lewis' permanent successor. State senator and state Democratic Party chair Nikema Williams easily defeated Republican Angela Stanton King for a full two-year-term starting in Jan. 3. Williams and King didn't run in the special election, though.

Some Fulton County voters on Tuesday will also choose between Democrats Sonya Halpern and Linda Pritchett to replace Williams in the state Senate, while voters in Clarke and Oconee counties will choose a new district attorney.

About 31,000 people voted in the September election, or 5% of the district's registered voters, and that number could be smaller by the end of balloting on Tuesday. Fewer than 11,000 had cast early ballots in person or mailed them in as of Sunday according to state voting records.

Hall said Monday that turnout is his biggest challenge, with some voters being asked to cast ballots for the fourth time this year, and with much more attention being focused on Georgia's twin U.S. Senate runoffs on Jan. 5 that will determine which party controls the Senate.

“It's making sure people know there's an election and making sure they vote,” Hall said. “There have been so many elections in Georgia. There's a lot of voter confusion.”

The most junior member of the House will arrive on Capitol Hill with very little time to accomplish anything besides being guaranteed that they can be remembered as a congressman. Voting on a temporary federal budget could be the most significant act that Hall or Franklin takes, although there are still fading hopes of additional COVID-19 relief legislation.

The 49-year-old Hall touts his experience on the Atlanta City Council and the Atlanta school board, saying he will make the most of his limited time to try to focus on directing money to the district's top concerns.

Franklin and Hall share similar positions on issues, but Franklin, now a theology professor at Emory University, preaches a higher cause as well.

“It's about moral leadership at a time of national crisis,” said the 66-year-old Franklin, who promises to call attention to Lewis' legacy, to further Martin Luther King Jr.'s vision of the “beloved community," and to appropriately express grief over the deaths from COVID-19

Franklin also promises to promote historically Black colleges and universities in COVID-19 recovery and to promote the extension of broadband internet service.

Tuesday's election is expected to cost about $1 million to conduct in Fulton County alone.