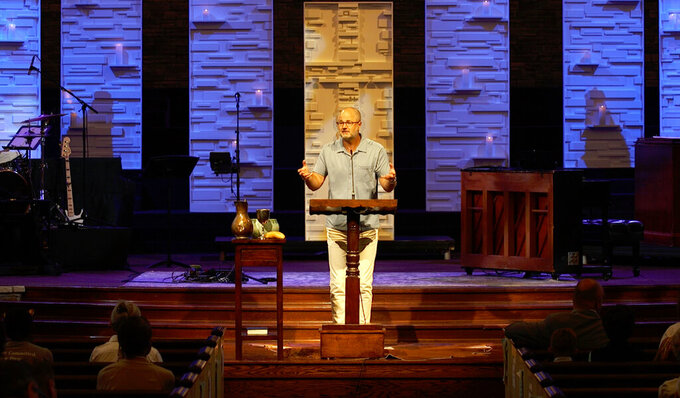 Both President Donald Trump and Democratic nominee Joe Biden count endorsements from well-known faith leaders. But for clergy members who try to tackle thorny moral matters without overtly backing a candidate, the campaign has tested their ability to reconcile religious values and politics.

That challenge comes in part from a year when almost every issue on religious Americans’ minds — from racial equality to worship during the pandemic — can spark a partisan debate. As the candidates court devout voters with sharply divergent strategies, the unavoidable nature of presidential politics has left some clergy counseling divided families and others fielding attempts to nudge them left or right.

Scott Sauls, senior pastor at Christ Presbyterian Church in Nashville, Tennessee, acknowledged that “it drives some people crazy” when he refuses to tip his hand politically. But his ultimate goal, he said, is helping people of faith make it past Election Day “more united, not less united.”

“I don’t think any Christian ought to be overly zealous for any one party,” Sauls said, describing both the political left and right as not entirely in line with his view of Christian values. “If you become more partisan than you are Christian … your faith gets undermined.”

The challenges that campaigns pose for faith leaders, most of whom don’t endorse from the pulpit, aren’t unique to the Trump era. But the dynamics of 2020 bring unique pressures to the pews: Religious conservatives have formed a core part of the president's base, particularly white evangelical Protestants, while Biden has touted his lifelong Catholicism in mounting his own well-funded religious outreach.

Sauls isn’t the only clergy member to handle the moment by avoiding partisan alignment. Southern Baptist pastor Jared Wellman, based in Arlington, Texas, said he talks about issues such as racial justice and the protection of life in the biblical context, eschewing a political frame and not telling congregants how to vote.

“Any time I get to a point where I start having American political conversations as a pastor, where it’s my primary purpose in a sermon,” Wellman said, he would have “missed what I’ve been hired to do.”

For some spiritual leaders, however, escaping politics is impossible given that the Bible itself can be interpreted as a political document. Natalia Terfa, pastor at a Lutheran church in the Minneapolis suburbs, said she’s occasionally been labeled as political after preaching directly from scripture — in 2016, some congregants assumed a sermon about Herod the Great was a subtle reference to Trump.

“It makes for a weird balance for preachers, because in no way should we ever weaken or candy-coat a text to make it more palatable, because we want people to not get mad about being political,” Terfa said. "That’s a hard line to cross.”

While a minority of clergy members have publicly endorsed a presidential candidate, most Americans say speaking out about key issues is a higher priority, according to polling released this month by the nonpartisan Public Religion Research Institute.

PRRI’s survey found 62% of Americans across religious backgrounds said it’s at least somewhat important for faith leaders to speak out about issues, with 45% saying the same about supporting a candidate.

Still, it's no easy task.

“I don’t envy any pastors today, because I do think it’s increasingly hard to carve out a space that’s about religion that isn’t also about racial identity and politics and partisanship,” said Robert P. Jones, CEO of PRRI.

The Rev. Bruce Alick of Zion Baptist Church in Reading, Pennsylvania, threads that needle by backing Biden in a personal capacity but not in his role as a spiritual leader. Moreover, Alick said he prayed for the president after Trump fell ill with the coronavirus.

“We in the pulpit have to be agents of healing and not further divisiveness,” he said.

That doesn’t mean staying away from the day's pressing issues, though, particularly as a Black pastor in a diverse congregation.

Some white churches “have the luxury to say, ‘Let’s just spiritualize everything and not get involved in politics,’” Alick said. But for Black Christians, he added, the church’s powerful role in the civil rights movement means its political power can’t be minimized.

In PRRI’s survey, two religious groups diverged from others: A clear majority of both white evangelicals and Black Protestants said it's at least somewhat important for faith leaders to support a presidential candidate.

Jones described those groups as “the most homogeneous in terms of their political choices."

Rabbi Benny Berlin, who leads a modern Orthodox Jewish congregation in Long Beach, New York, said he’s gotten questions about how far to wade into politics and “been called to provide moral support to families, people who are split down the middle.” He tries to steer clear of topics that could be unnecessarily controversial.

“You don’t want to get sucked into the discord that’s wrapped in the political climate,” Berlin said.

Among Christian leaders, Trump has proven a divisive figure since his 2016 victory, when he overcame lewd remarks famously caught on videotape — as well as coarse behavior such as appearing to mock a reporter's disability — to become an unlikely ally of right-leaning evangelicals.

For one Michigan pastor, the spiritual burden imposed by Trump’s relationship with Christianity proved too heavy to bear. Keith Mannes stepped aside from his Christian Reformed congregation earlier this month after three decades of ministry, saying he loved his church but felt alienated from the broader institution.

“People are emotionally and spiritually troubled, and they can’t reconcile it,” Mannes said. “This particular moment is stretching that rubber band as far as it can possibly be stretched.”